Yes, We can Bust the Ballot Burglary
Keiser Report: How to protect your mail-in ballot and un-steal the election

22% of all mail-in ballots don’t get counted — that’s according to an MIT study conducted before Trump took office. And the Post Office has always been a problem, even before a Forever Trumper was appointed as Postmaster General.

Safest way to vote: Ask for an absentee ballot 2 months in advance. If it doesn’t arrive by October 15, pick it up at your county Board of Elections (Google yours), fill it out, and return it right there — and demand validation of your signature.

In 2016, more than 141,000 ballots were rejected because someone challenged the signature. If you mail in your vote, make sure to follow your states insane rules — a witness for signatures is required in Wisconsin and many states. And most states require first time absentee voters to include a copy of their ID.

Don’t go postal: drop your ballot off at the your County Clerk’s office, early polling station, or drop box if you’re in a state that has them. And protect your ballot with my special “Ballot Condom.”

In this excerpt from his interview with Max Keiser and Stacy Herbert for the Keiser Report, Palast offers more tips for protecting your vote and cautions that if we don’t overwhelm the steal, under the terms of the 12th Amendment, Trump could “constitutionally” cling on to power even if he doesn’t win the election.

Max Keiser It seems like America slipping into a situation where we’re going to see an actual coup in 2016, when Trump took over, we now, now looking back, it appeared as though there was a coup attempt in the United States. There’s been a couple in the past. FDR faced a coup attempt, in his administration, you’ve probably done some work on that. And I believe there was one going back even further than that. But, Greg, what you’re describing here sounds like America is slipping into what we jokingly refer to in other countries as banana republics. Is that where we’re heading Greg?

Greg Palast: Well, the banana has already been peeled. Because in 2016, as I point out in my book, Trump didn’t win the Electoral College. As I say at the beginning of the book, you’re not guilty America. You don’t have to hide your hands in shame that you elected a kind of orange stained, porcine, bloviating bigot. No! Quickly, in Michigan, 75,000 ballots were not counted in Detroit, machines broke down. Trump supposedly worn by 10,000. How do you win the state if you don’t count 75,000 ballots and you win by ten? Excuse me, who won that state?

So Trump didn’t win 2016. And when you are ruled by someone you didn’t pick, you’re a slave. Okay. So we’ve had a coup d’état and we’re slaves now. Now I’m talking about how How Trump Stole 2020 is a warning. I’m hoping to kick off a slave revolt where we let the voters pick the president. How about that for a change?

And you’re right, we’ve had this history [of coups] in America, and will it happen again? Now, do we have another chance that there will be something like an obvious coup d’état in November? Here’s how it could run, and it can be a “constitutional” coup d’état. The way it goes is that there’ll be complete mayhem over mail-in balloting, which is going to cause absolute chaos and an implosion at the Post Office. Counting those ballots is going to implode. And you add to that civil unrest fermented by the Trump vigilante force. You’re going to have 50,000 guys in Hawaiian shirts creating mayhem. You’ve got federal police on the street, which are gonna provoke incidents.

So what happens… Michigan, Wisconsin, Florida, where you have right wing legislatures, could well say there’s too much chaos, we can’t certify the vote. So veryone knows Biden’s won by the exit polls, but they’re not going to certify those states. When that happens. you don’t have 270 votes for anyone in the Electoral College, then it goes under the 12th Amendment to the Constitution which says it goes to the house and every state gets one vote. California, Wyoming, get the same vote, Trump is reelected — constitutionally under the 12th amendment in that situation. Are you ready for it?

Keiser I’m getting it. I’m feeling it. You’re laying out the case here… you’re bringing in the historical precedence. You’re kind of spit balling how it might work, how it goes into the house, the constitution, and I’m seeing what’s brewing here is that this election is a complete failure. Trump clings to power, he’s in power, ostensibly, and the country is in a huge crisis.

Palast: It doesn’t have to be that way, that’s the point, Max. The point of How Trump Stole 2020 is you can steal it back. I wouldn’t bother writing a book if I thought it was all over with. I’d just go to the beach and forget about it. Isolate somewhere on a top of a mountain. But, no, you can bust the burglary. We can steal it back. That’s why at the back of the book, I have something called “Greg & Ted’s New and Improved Ballot Condom.”

No, you don’t put around your ballot. What you do is you follow the rules. Number one, they wiped out literally millions of voters off the voter rolls. So reregister. Check if you’re still registered. I did… I looked at my registration in California and it said no such voter…. So I reregistered online.

Go to either vote.org or even better, your Secretary of State or your county Board of Elections, make sure that you are listed, that you’re listed as active. If you’re listed as inactive, you contact them and say, here I am, I’m an active voter. Simply that, calling your voting office will turn you from inactive to active under the law.

So there’s lots of things you can do to make sure you protect your vote, and your loved ones.

And make sure that you’re mail-in ballot counts. Number one, you’re not going to mail it in if you don’t get it. So you have to be registered and you have to be active. Second, if you don’t get it in time, you’d better call your office and say, where is my ballot? That’s very, very important because you see all those people in those lines in Milwaukee and in Atlanta in those primaries? We talked to the people in those lines. Overwhelmingly, the vast majority are people who never got their mail-in ballot, so they were stuck waiting in lines, worrying that they’re going to get a deadly virus. Don’t let that happen to you. Make sure you’re getting the ballot.

Then when you get it, fill it out like you’re taking the SAT. Don’t skip a line. Don’t leave an extra mark. Don’t use a red pen. When I was in Michigan looking at the ballot recount — which was stopped by Trump, by the way, by his lawyers — the Republicans were challenging every single Hillary ballot. If it was done in red pen, they said this is the wrong color pen or, oh, they used an X instead of filling in the bubble. I’m not making this up. They’re going to challenge every vote. So be so careful with how you fill out your vote and make sure you sign on the outside of the envelope with your correct name. Make sure that you use proper postage. A hundred thousand people lost their right to vote for postage due on their mail-in ballot. And can you imagine what’s coming up?

Look, my book has a whole calculation… About 2 million voters were blocked from the voter rolls, minimum, in 2016, and 5.8 million ballots were disqualified. That’s an official — official — figure: 5.8 million ballots disqualified. But that means that they can only steal about seven or eight million votes at a time, maybe 10 this year out of 160 million that I expect. So they can’t steal all the votes all the time. We can overcome the steal. Obama did that… When I wrote for Rolling Stone, we calculated 5.9 million votes were stolen from Obama. He just overwhelmed it, that’s all. 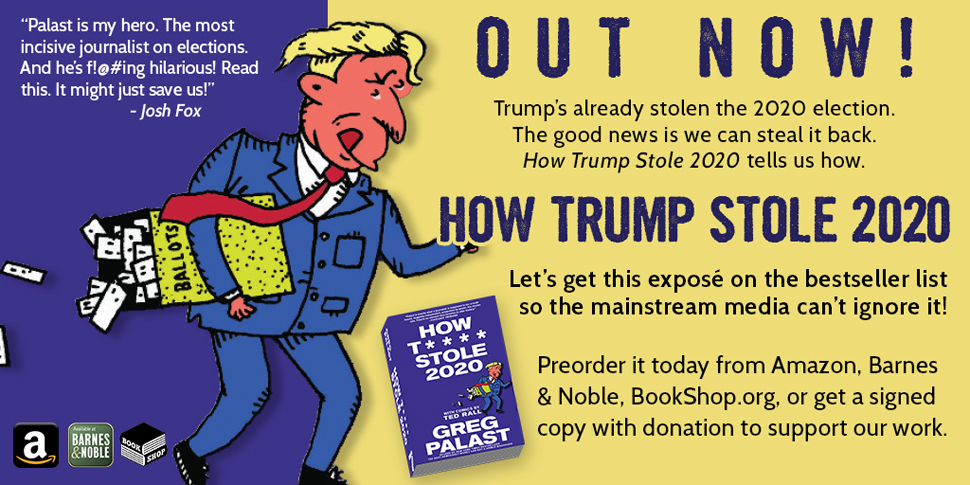