I get it:  We all must vote by mail—or we die.  There is really no other safe choice.

But there is much to fear, especially for minority and young voters, with a switch to all-mail voting—unless our broken absentee ballot system is fixed. 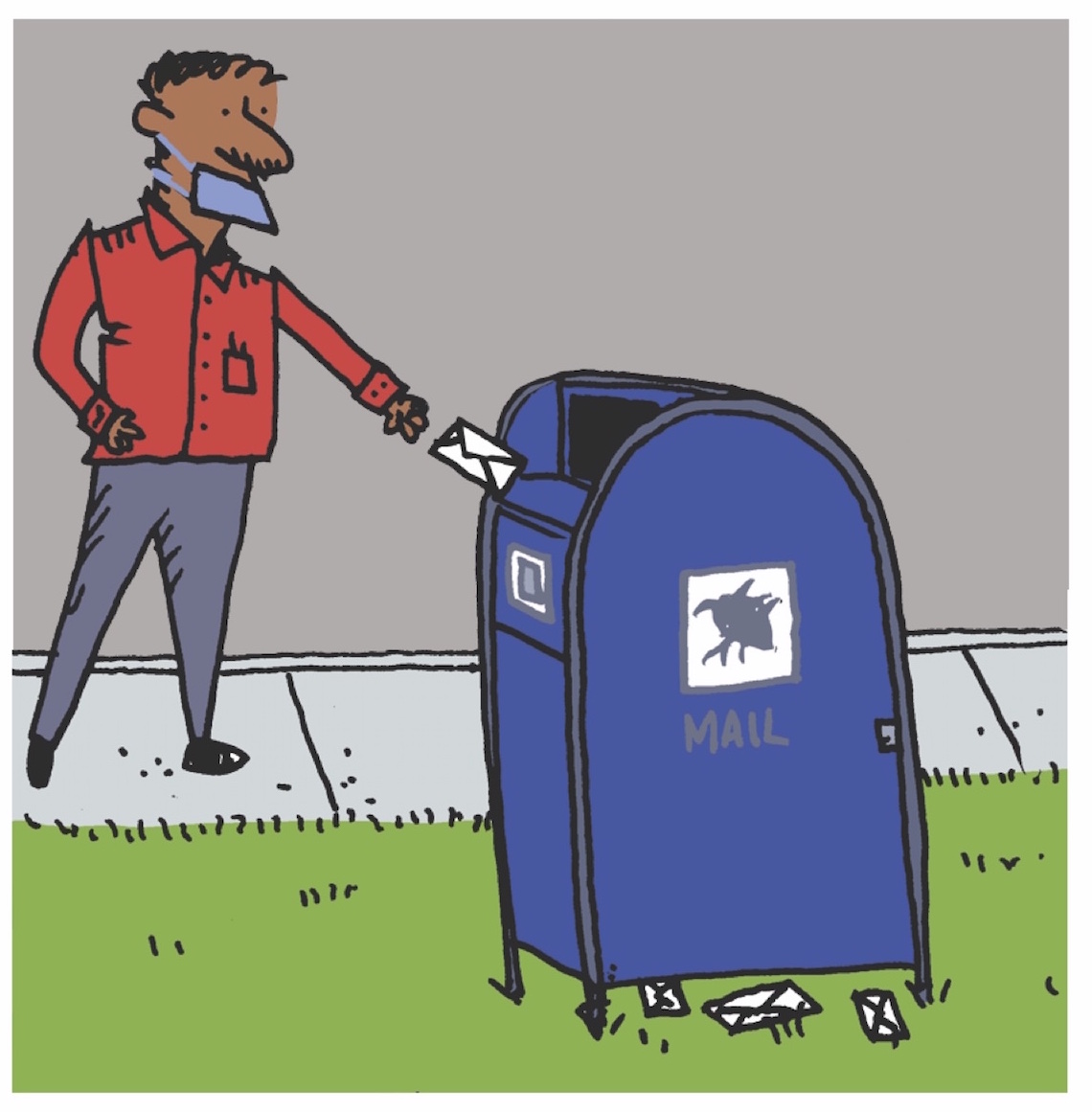 Here’s what the “Go Postal” crowd doesn’t tell you:  In 2016, 512,696 mail-in ballots—over half a million—were simply rejected, not counted.  That’s official, from the federal Elections Assistance Commission (EAC).

But that’s just the tip of the ballot-berg of uncounted mail-in votes.  A study by MIT, Losing Votes by Mail, puts the total loss of mail-in votes at a breathtaking 22%.

Move to 80% mail-in voting and 25 million will lose their vote.

And not just anyone’s mail-in ballots are dumped in the electoral trashcan.  Overwhelmingly, those junked are ballots mailed by poorer, younger, non-white Americans.

Columbia Law professor Barbara Arnwine, founder of the Transformative Justice Coalition, says that a move to mail-in voting is, “really, really dangerous to the Black vote.” Millions of low-income voters who rarely vote absentee will now have fill out multi-step forms for the first time, which, “will lead to disaster,” says Arnwine.

Vote by mail is not as simple as “pick and lick”—picking candidates and licking the envelope.

Eight states, including the swing states of Wisconsin, North Carolina and Klobuchar’s Minnesota, require mail-in voters to have the ballot signed by a witness. The required double-verification is a nightmare—it requires breaking the lock-down—and is an invitation to ballot challenges.

Three states, including swing state Missouri, require the ballot to be notarized. (Alabama requires a notary or two witnesses.)

All but six states “verify” your signature against your registration signature. Partisan officials decide if there is a “match.”  No less than 141,000 ballots were rejected as “unmatched” in 2016.

Trump’s already stolen the 2020 election. The good news is we can steal it back. How Trump Stole 2020 tells us how. Let’s get this exposé on the bestseller list so the mainstream media cannot ignore it — preorder it today from Amazon, Barnes & Noble, BookShop.org, or get a signed copy with donation to support our work.

“Palast is a real American hero trying to save our democracy. Read his work. It might just save us. And he’s f!@#$ing hilarious!” — Josh Fox

Why?  To prevent vote fraud, someone stealing your ballot and voting in your name. President Trump warns, “Mail ballots are very dangerous for this country because of cheaters.”

Except, Mr. President, let’s not mix fruit-cake theorizing with the facts.  Rutgers Professor Lorraine Minnite found just six verified cases of voter impersonation over 12 years of voting nationwide. The Election Law Journal reported that, “the proportion of the population reporting voter impersonation is indistinguishable from that reporting abduction by extraterrestrials.”

Plus, some states require all or first-time voters to mail in a copy of their ID; another hurdle for the poor, those without driver’s licenses or those who may have the wrong ID and not know it.  Wisconsin Elections Commissioner Ann Jacobs told me that 182,000 state university students have photo IDs—which cannot be used to vote. Trump won Wisconsin in 2016 by less than 23,000 votes.

Nationally, over 100,000 absentee ballots were deep-sixed because they are missing a signature—in many cases, the second voter signature required in some states.  In California, Asian-American voting rights activist Hyepin Im was horrified to find that Korean-American absentee ballots were tossed because the Korean language ballots ask for the voters signature in Korean. Not surprisingly, the voters signed with Korean characters, disqualifying their mail-in ballot.

And another 100,000 ballots are lost in presidential elections because of postage due.

Going Postal
You can’t mail in your ballot if you don’t get it in the first place. 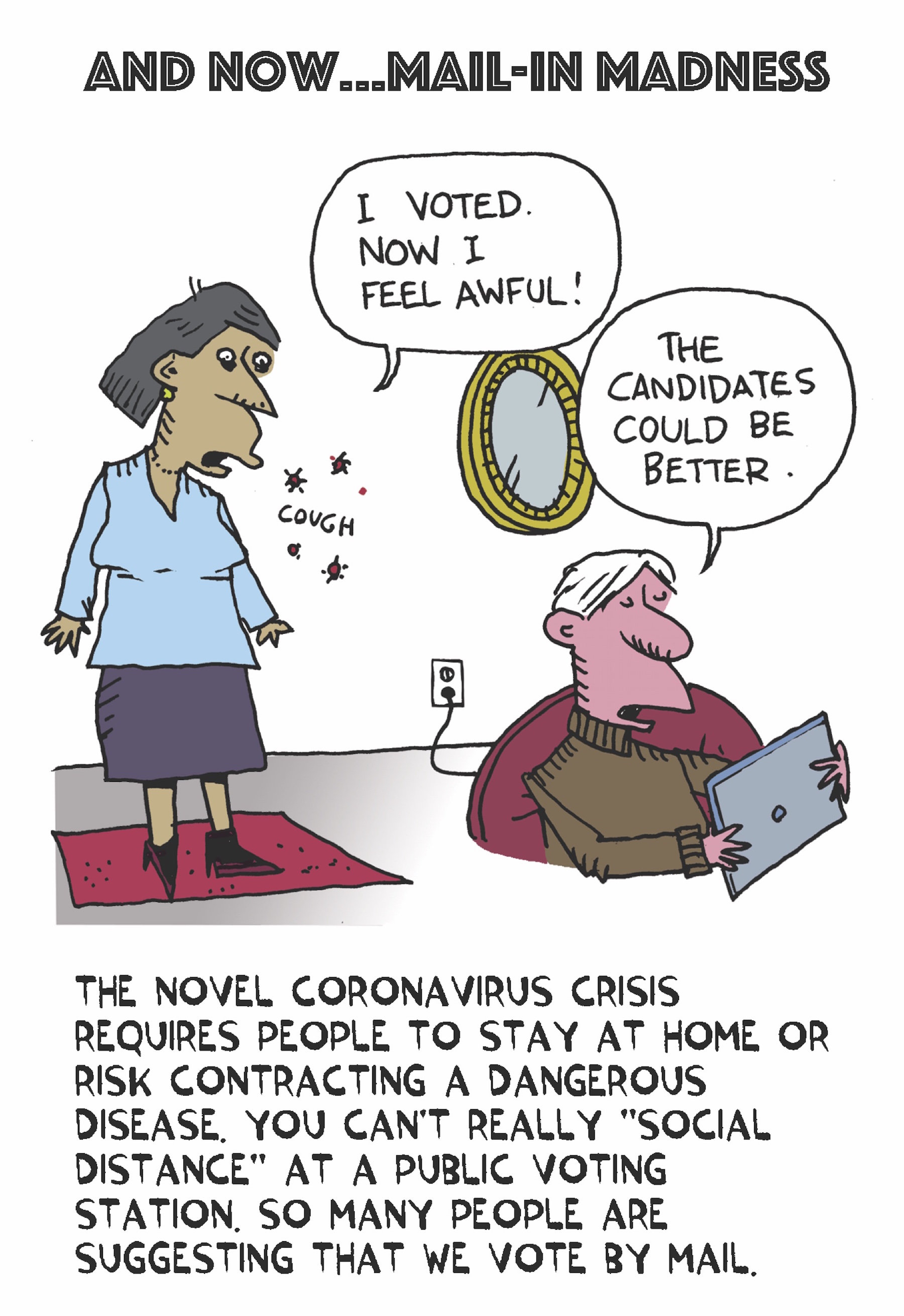 Direct-mail expert Michael Wychocki of Chicago tells me that 4% to 20% of any mailing goes astray—leaving voting rights at risk for more than a million citizens simply from wrong and changed addresses.

And, crucially, there’s an enormous difference between rich and poor. “The African-American Williams family, renters, may move every year,” Wychocki says, “but the Whitehall family in the million-dollar home is barely likely to have moved.”

Under federal law, if you move within your county, you don’t lose your registration; but hey, the Post Office will inadvertently wipe away your right to vote, returning your do-not-forward ballot.

And pols, especially of the Republican persuasion, know it.

That’s why I’m not surprised that the first voting official to call for a switch to all-mail balloting is Ohio’s Republican voting chief, Frank LaRose.  From 2012 to 2016, Ohio swung from Obama to Trump, and LaRose would like to keep it that way.

One secret of the state’s flip to red is that LaRose’s GOP predecessor, in the month before the 2016 presidential election, simply refused to send absentee ballot application cards to 1,035,795 voters.

Of those, Ohio cancelled 385,065 registrations because these voters supposedly missed two federal elections.  The National Voter Registration Act of 1993 bars a state from purging you from the rolls for your decision not to vote. But, in 2018, the Supreme Court, in a 5-4 decision, approved Ohio’s mass erasure of “inactive” voters. That Court ruled that Ohio could conclude, in good faith, that skipping elections was proof positive that the voter had moved out of their county.

But they had not moved.  The Palast Investigative Fund and Salon retained John Lenser and his team of address location experts (the same experts used by Amazon) to review purges by states using the Ohio method and found the purge list of “movers” to be 70%+ wrong.

Analysis of the latest purge in Ohio showed the Democrats were scrubbed at nearly twice the rate as Republicans.

From Georgia to Wisconsin, 17 million voters have been erased from the voter rolls in the past two years in a wave of purge-mania. Given the massive errors resulting from this latest push to purge, millions of citizens, come November, will not find their expected ballot in their mailbox.

Ohio’s GOP purge-meisters have shown other states how cutting registration rolls can target voters of color.  Voting process attorney Prof. Robert Fitrakis of Columbus State University, says, “We have a history in Ohio of deliberately using the absentee ballot in a partisan and racist way.”

Fitrakis pointed out that George W. Bush’s re-election victory in 2004 hinged on Ohio GOP Secretary of State Ken Blackwell disqualifying mountains of mail-ins with such excuses as, “Signature below line,” i.e. part of the signature was not perfectly inside a box.

Many states have moved to same day registration (SDR) so that a wrongly purged voter may register on Election Day in the polling station.  With mail-in balloting, kiss that key protection goodbye.

Bubble Trouble
Even if your mail-in ballot arrives on time and is accepted, your vote for President may still not count.  The nasty secret of American elections is that we don’t count all the ballots.  The US has a huge problem with “residual” votes when the voter’s choice is not readable by our counting machinery.

And once again, some voters are more “residual” than others. For example, the Brennan Center for Justice finds that in some races, African-Americans are five times as likely to have their vote disqualified for “over-voting” (making an extra mark on the ballot) than white voters.

Luckily, the “residual votes lost” has declined because of in-precinct scanners:  voters put their ballot through the scanner which rejects it, or beeps, if it detects an under- or over-vote. With mail-ins, there is no scanner warning to the voter.  The non-count will soar because mail-in voters make understandable errors such as marking an “X” next to their choice instead of filling in the little bubble.

That’s not enough.  States must be barred from requiring witness or notary signatures.  And states, like Wisconsin, must end their requirement that some voters must mail in a copy of their ID to request a mail-in vote.

Signatures should not be subject to challenge unless there is a report filed that the ballot has been stolen.

“Inactive” voters must not be denied ballots—let the voter choose to be active.  And, as proposed by Wisconsin Governor Tony Evers, every voter should be mailed a ballot without having to return a postcard requesting the ballot, as many states require.

Unless America radically changes the way we send, receive and count mail-in ballots, the massive switch to postal voting, and the mountain of uncounted minority votes it will generate, could lead to Trump’s re-election—no matter the will of the voters.