Our 2016 report for Rolling Stone exposing Kris Kobach’s Interstate Crosscheck purge program was cited several times in a lawsuit filed by the ACLU for Common Cause as the evidence that Kobach’s system of removing tens of thousands of voters in Indiana was both wildly inaccurate and racially biased in the extreme. The report cites the findings of the Palast investigations team voter address expert Mark Swedlund.

Crosscheck supposedly finds voters registered in two states or voting in two states in the same election — and cancels the voters’ registration. Unlike other states which then send postcards to the alleged double voters that ask them to confirm their address, Indiana took a short cut: If you’re on Kobach’s list, you’re purged.

Until the Palast team first exposed Crosscheck for Al Jazeera in 2014, not one reporter had ever obtained and exposed the Jim Crow purge list.

Here is a screenshot from part of the Indiana Crosscheck scrub list:

According to the state of Indiana, which began the scrub under then-Governor Mike Pence, James Woodrow Harris Sr. of Virginia is supposed to be the same voter as James R. Harris. James R. was about to lose his vote …until Palast exposed the lists.

Note from Greg Palast:
We are not done. While we have successfully helped kill off Kobach’s racist purge operation — Kansas has stopped issuing the scrub lists to other states following Kobach’s defeat in his race for Governor — Crosscheck, under a different name, may come back: one state is threatening to re-start it… Indiana!

This week’s court ruling will not block it. So damn! We still have work to do. 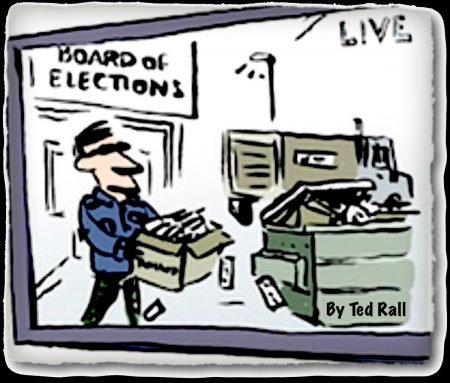 Won’t you help us continue this fight? For those of you who may be unaware, we are about to have a Presidential election. The question I have for you: should the voters choose the President — or should the president be selected by Jim Crow trickery and scrub lists?

Donate and get a signed copy of new my book How Trump Stole 2020. (And it will soon be out en español.)

We are now investigating voter roll chicanery in Wisconsin, Ohio — and, if we get the resources, Ohio and Florida.

We’ve got the team; we need the tools. We know where to dig, if you help us buy the shovel.