You have people registered in two states. They’re registered in New York and in New Jersey. They vote twice. There are millions of votes in my opinion.

I usually don’t quote guys who wear tin foil hats and get messages from another planet. But this is an exception: I’m quoting the President of the United States, Donald J. Trump.

Don’t laugh. Trump’s claim that millions of Americans are voting twice, a felony crime, is the principal reason Donald J. Trump won the presidency. Because, in the year before the 2016 election, 1.1 million of these felonious double voters were removed from the voter rolls.

Or, to be accurate, 1.1 million voters were removed because they were accused of voting or registering in two states.

With all these double voters, who put their address on their registrations, you’d think it would be darn easy to find them, that the jails would be full of these criminals. After all, the man who created this list of double voters said, “Double voting: it’s a slam-dunk to prove that.” But somehow Trump’s minions, who directed a national man-hunt, can’t find them. Why?

Could our President have it wrong? When asked where Trump got this number of millions of double voters, the White House cited a law professor with a Harvard-Yale-Oxford pedigree: Kris Kobach of Kansas.

I dismissed nothing. My team’s investigation of the national mass purge of alleged double voters is now in its seventh year. The work began in 2014 for Al Jazeera America, then with AJAM’s death moved to Rolling
Stone, then to the Guardian. And we are not done.

Besides his day job as Secretary of State of Kansas and side gig with automatic weapons, in 2013, Kobach became the chief of the national “Interstate Crosscheck” program.

The concept was simple and, at first glance, quite reasonable: member states would share their voter registries with Kobach, who would look for voters registered in two states—“potential double voters,” Kobach called them—and remove the duplicates from the voter rolls.

Who could argue with that?

In fact, the press, not just Fox but NBC and literally hundreds of outlets, right to left, praised “Interstate Crosscheck” as the brilliant use of computers to stop double voting fraud.

At its peak, thirty states joined Crosscheck. Almost all were Republican controlled, but some Democratic voting officials joined with enthusiasm. Who can defend fraudulent voters?

Seven million double voter suspects? (Or, as Kobach would have it, 3.6 million Americans voting or regis- tering twice.)

I was curious. Who are they? What are their names?

The number one perp is a crew of double voters who all, interestingly, share the name James Brown. In Georgia alone, 288 voters named James Brown wrongly registered in a second state.

Here is a direct screenshot from the Crosscheck list. 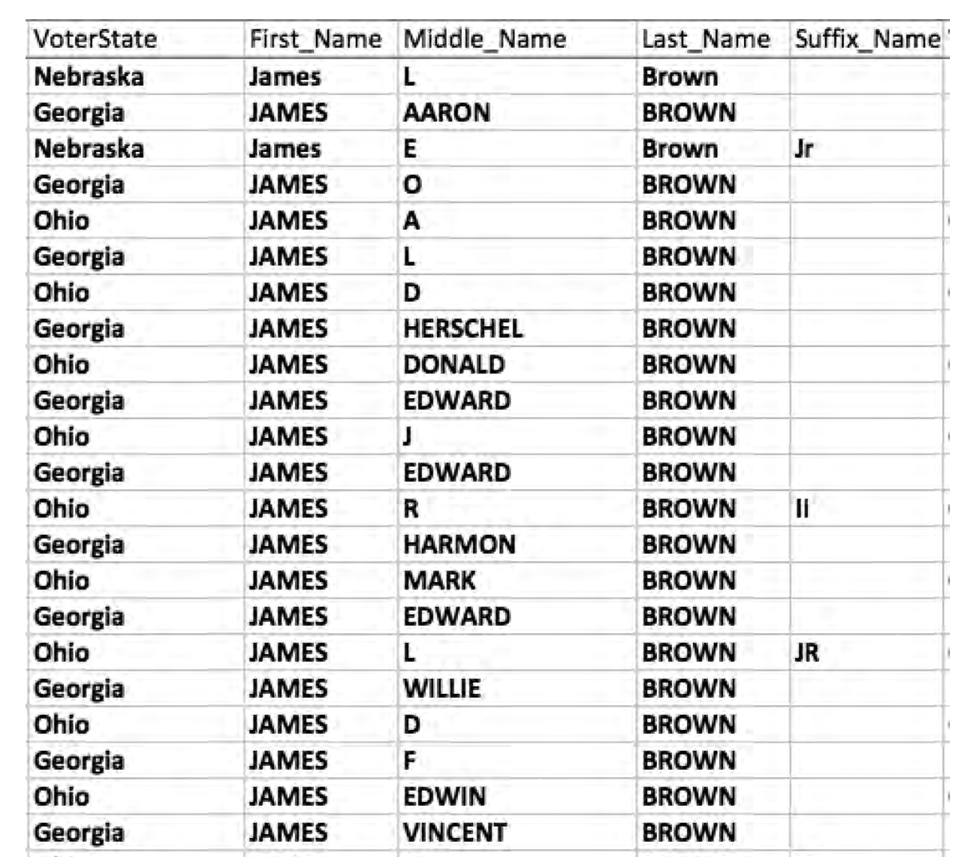 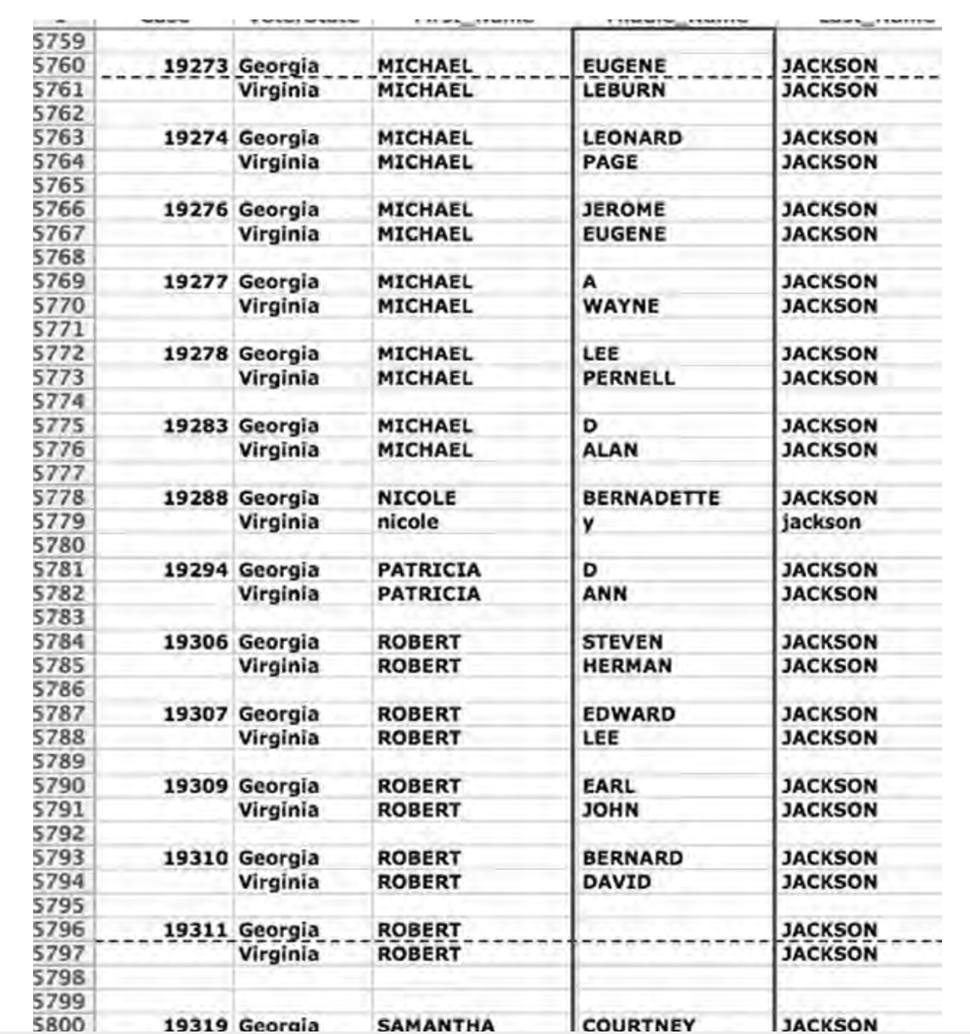 Then there is the “Mohamed Mohamed” posse. Because they share the most common name on the planet, they were able to pull off their electoral crime. Though, inexplicably, they changed their middle names. In Columbus, Ohio, alone, there are more than 20 Mohamed Mohameds illegally registering in two states.

It would be a joke . . . except that thousands of these Mohameds and Michael Jacksons and James Browns were purged from the voter rolls by Ohio Secretary of State Jon Husted, the Husted of purge-by-postcard fame.

Once again, I brought in Mark Swedlund and his expert database team. They went through name by name and discovered that two million of the supposed matched voters had either mis-matched middle names or mis-matched suffixes (Jr./Sr.) or both.

How could this be? All the gushing news reports about Crosscheck cited Kobach’s statement that the voters were matched not only by first and last name, but by middle name, suffix, date of birth and last four digits of their social security numbers.

But, then, I got my hands on the secret instructions for Crosscheck’s implementation sent by Kobach to every voting state official telling them they could “ignore” mis-matches. Indeed, says Swedlund, almost every one of the millions on the list was a mismatch. And those actually registered in two states were simply innocent voters who had re-located but had not yet sent a notice to remove themselves from their old address. What they weren’t were criminal double voters. None.

But any reporter simply glancing at the list would know that.

So why didn’t US papers take note? Because they didn’t ask. Not a single American newspaper asked for the actual list of alleged double-registered voters. Not one asked for the names of the hundreds of thousands of voters named Jackson and Rodriguez and Mohamed who were purged and lost their right to vote.

Reporters — or should we call them “repeaters?” — did repeat the press releases almost word for word from GOP Secretaries of State that they had located thousands and thousands of illegal double voters with Crosscheck.   END OF EXCERPT | READ THE FULL STORY IN HOW TRUMP STOLE 2020

Help us expose the fraudulent Crosscheck purges. For those of you who may be unaware, we are about to have a Presidential election. The question I have for you: should the voters choose the President — or should the president be selected by Jim Crow trickery and scrub lists?

Donate and get a signed copy of new my book How Trump Stole 2020. (And it will soon be out en español.)

We are now investigating voter roll chicanery in Wisconsin, Ohio — and, if we get the resources, Ohio and Florida.

We’ve got the team; we need the tools. We know where to dig, if you help us buy the shovel.