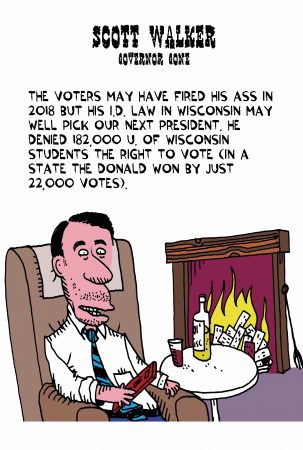 Democrats had crushed it seven elections in a row, helped by the massive vote from the famously progressive, activist University of Wisconsin student population.

But then, on Election Day 2016, a giant hunk of the student vote simply… vanished. And the Milwaukee Black vote also seemed to just… disappear.

And, if Wisconsin’s voter vanishing operation isn’t rooted out, 2020 will be déjà vu all over again. If Trump swipes this swing state again, he’s as good as inaugurated.

Where did they go, the voters who mysteriously didn’t show up? I flew to Wisconsin just before the COVID lockdown to hunt down the students and voters of color who, mysteriously, did not show up.

The first thing that caught my attention: While the rest of the nation had massive voter turnout in 2016, in parts of this down-to-the-wire state, voting fell off a cliff. Which parts? In Black-majority Milwaukee, turnout plummeted from 66 percent to 56 percent of the voting-age population. That’s strange.

And Wisconsin’s student vote evaporated. Nationwide, only two states recorded a drop in student voting. Wisconsin’s drop was breathtaking: In-precinct voting by students declined by a third, from 67 percent to 49 percent.

They didn’t need to drag the local lakes to find the missing students and Black voters. They were disappeared in plain sight by the Republican legislature under laws crafted by Wisconsin’s radical-right governor, Scott Walker.

One new law required a government photo ID to vote. But the photo ID issued by the state to its 182,000 University of Wisconsin students did not qualify them for voting nor for registration.

How brilliant is that? Gun permits could be used to vote; but not student ID. Carry a weapon, good. Carry a book, forget it.

A Wisconsin driver’s license would do. But not everyone has a license. Who doesn’t drive? People who don’t have cars — students in Madison, low-income renters who take the bus in Milwaukee, i.e. voters of color. And the color is Democratic Blue.

What was particularly devastating was that the law was ordered into effect by a court only two weeks before the 2016 election. Even those who knew of the change had little time to correct their lack of paperwork, even if they could.

2020 Mail-In Meltdown
But this is about 2020. Despite all the trickery, Walker was tossed out on his keister in 2018. New Democratic Gov. Tony Evers — encouraged by his Lt. Gov. Mandela Barnes — has tried to make it easier for Wisconsinites to vote without dropping dead from the virus.

The GOP won’t have it. Republicans went to court to successfully overturn Governor Evers’s order waiving the requirement that absentee ballots include a witness signature.

Elections Commissioner Ann Jacobs pointed out to me that the university could simply issue ID that allows students to vote … but, she noted, just before he lost reelection, Republican Governor Walker appointed the university regents — GOP hacks who wouldn’t dream of minting tens of thousands of Democratic voters.

But students will have to get more than a new ID. Wisconsin is alone in the U.S. in requiring that a student voter can’t register without including proof of enrollment in good standing. Like, huh? Fall behind in tuition, flunk algebra… lose your vote?

As Common Cause warns,

The standard student ID at only four of the University of Wisconsin’s 13 four-year schools and at eight of the state’s 23 private colleges can be used as a voter photo ID.

Note: if you use a school-issued ID for voting, you must also present (or display electronically) at the polls a separate proof of enrollment document, such as an enrollment verification form, class schedule or tuition bill.

And the student will have to include photocopies of their paper chase in their absentee ballot.

Assuming they get one. The U.S. watched in horror as Wisconsin voters were forced to vote in person on April 7 at the height of a virus spike — when the Republicans overturned the governor’s order to delay the vote. But why didn’t voters simply vote by mail?

They tried. First, you can’t mail in a ballot if you don’t get one. About 1 in 10 ballots requested nationwide are never received by the voter – or received too late. That’s national. Students and renters who move in their neighborhoods, within their dorms, don’t have an easy time getting their mail-in ballots; over 100,000 could not get a ballot because, unbeknownst to the voter, they had been purged from the voter rolls, a purge that centered, once again, on Milwaukee and Madison.

We spoke with voters (mostly African Americans) in line, and voter after voter said they did not receive their mail-in ballot. Milwaukee was forced to reduce the number of voting stations from 180 to five because they simply couldn’t find enough poll workers, mostly retirees, who would risk their lives to hand out ballots. Add the withholding of mail-in ballots to the closure of polls and you’ve got electoral meltdown.

61,274 Voters Shafted
University of Wisconsin professors Michael DeCrescenzo and Kenneth Mayer wanted to find out about the mysterious massive drop in 2016 turnout. They conducted an extraordinary survey, contacting thousands of non-voters directly. They asked each registrant why they did not, or could not, vote. 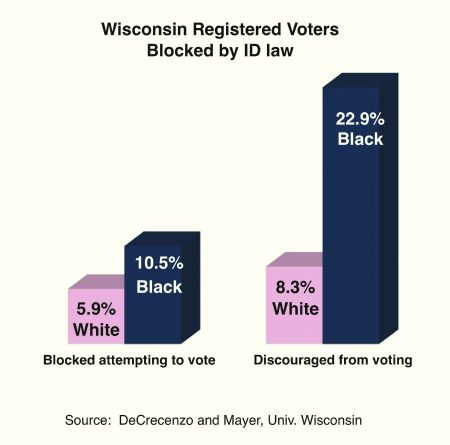 They discovered that 28,000 citizens in just two cities, Milwaukee and Madison, were blocked by the ID requirement. (This 28,000 excludes the majority of voters without proper ID who did not vote for other reasons, such as long lines — or who just didn’t give a damn about voting.)

Take a look at this chart from the University of Wisconsin study. The ID law was three times as likely to block African Americans as whites.

The Black vote in Wisconsin statewide fell by a mind-blowing 24.5 percent between 2012 and 2016 when the ID law hit. The loss of Black and student votes due to the ID law cost at minimum 61,274 votes, almost three times Trump’s plurality. And that estimate of the loss is low. I’ve left out the Latinx voters who are growing near to the size of the Black population. Any way you calculate it, the show-me-your-papers ID tactic won Wisconsin, not the voters.

And that’s how Trump has already stolen 2020. But, if we raise hell and raise the warning, we can steal it back. And we can try something new for the U.S. — letting the voters choose the president.

This article is adapted from Palast’s newly released book How Trump Stole 2020 (illustrated by Ted Rall) get it and find out how to steal it back.