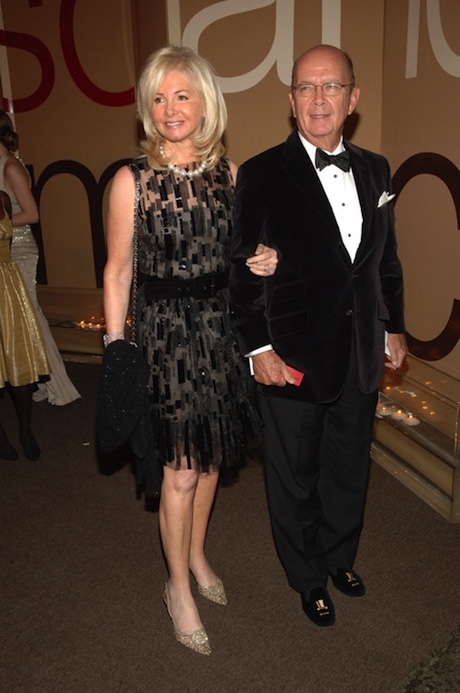 Our 79-year-old Secretary with Mrs. Ross (#3). Dig the Stubb-Wootton slippers he’s sporting – with the Commerce Departments logo embossed on top! ($600, no logo.)

I’ve met Trump’s billionaire Commerce Secretary Wilbur Ross, the one who forgot to sell his tanker partnership with the Russians before being sworn into office – a venture with Putin’s son-in-law, no less –  as revealed by the Paradise Papers! It was just before Wilbur’s 2005 purchase of Sago Coal Mine of West Virginia through his International Coal Group.
In the first six weeks under Ross’ ownership, the Sago mine suffered two roof collapses. Ross said that, “We were comfortable, based on the assurances from our management, that they felt that it was a safe situation.” Safe financially, maybe, but a third roof collapse in January 2006 caused twelve miners to suffocate to death.
There were no working emergency phone lines to reach them, to get them to safety, as required by law.
But Wilbur – the man Fortune Magazine dubs “a revered vulture investor” – has a heart. In light of the tragedy, he has asked Americans to donate to the his mine victims’ families. He didn’t say, however, if you should send your money to his mansion in Palm Beach, or to the other mansion in the Hamptons or to his penthouse on Fifth Avenue.
– from Armed Madhouse by Greg Palast
*****
Before turning to journalism as an investigative reporter for The Guardian and BBC Television, Greg Palast was an investigator of fraud and racketeering for governments and labor unions worldwide. His investigations have appeared in Rolling Stone, Harper’s and New Statesman. Known as the reporter who exposed how Katherine Harris and Jeb Bush purged thousands of Black voters from Florida rolls to steal the 2000 election for George Bush. Palast has written four New York Times bestsellers, including Armed Madhouse, Billionaires & Ballot Bandits, and The Best Democracy Money Can Buy, now a non-fiction movie.
Stay informed, download the new, #TrumpStoleIt, post-election edition of our hit film, The Best Democracy Money Can Buy, or get the signed DVD, a signed copy of the companion book – or better still, get the Book & DVD combo.
Visit the Palast Investigative Fund store or simply make a tax-deductible contribution to keep our work alive! Alternatively, become a monthly contributor and automatically receive Palast’s new films and books when they’re released!
Or support the The Palast Investigative Fund (a project of The Sustainable Markets Foundation) by shopping with Amazon Smile. AmazonSmile will donate 0.5% of your purchases to the Palast Fund and you get a tax-deduction! More info.
Subscribe to Palast’s Newsletter. Follow Palast on Facebook and Twitter.
GregPalast.com