With Dennis J Bernstein for Nation of Change 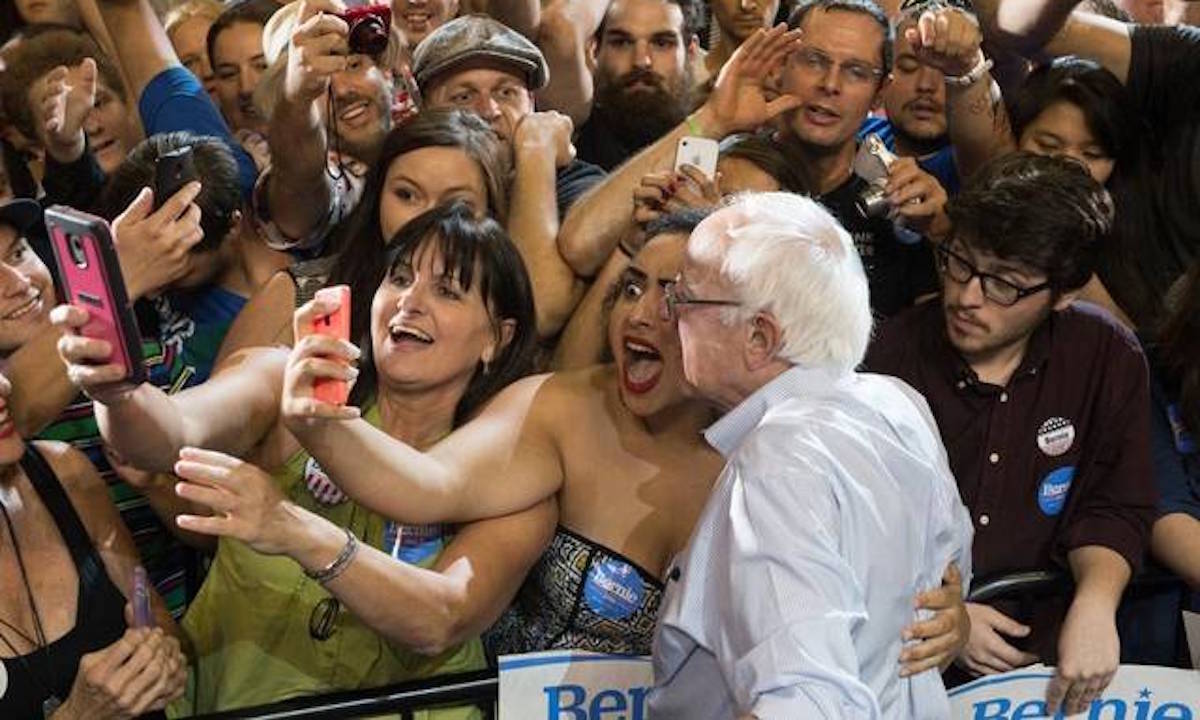 Bernie Sanders may have conceded the nomination, but he can still win control of the Democratic Party. By harnessing the power of his people, Bernie could ensure Hillary keeps the promises she made to him in exchange for his endorsement. And with 13 million supporters in his pocket, Bernie has the chance to create something far stronger than the Christian Coalition, which has shaped GOP policy for over two decades. He could lead a mighty Un-Christian Coalition, if you will, that moving forward could force Hillary’s hand so she has little choice but to serve the people as opposed to her corporate paymasters. In this week’s Best Democracy Money Can Buy, Election Crimes Bulletin, Dennis J. Bernstein and Greg Palast explain how Bernie can take a tip from Satan’s playbook and seize this moment to create one hell of a powerful a movement!

Dennis J. Bernstein: Today we’ve seen Bernie came out strong in support of Hillary Clinton. Many people are troubled, some are supporting it, some aren’t. Let’s talk a little bit about what this moment means. Is this the end of a moment or the beginning of a movement?

Greg Palast: Well, that’s up to the people, and Senator Sanders. When you saw him on stage, he looked like those guys who are reading those confessions from a North Korean prison: “I am sorry. I have disgraced the party and I will atone for my sins.” I know a lot of people in the Sanders crowd, and the Bernie or Bust people, good friends of mine, are crying about Bernie drinking the Kool-Aid for the Democratic Party, but that was foreordained, they weren’t going to let him win.

Barack Obama beat Hillary Clinton, but he had something else on his side, which is not the people – remember he actually lost to Hillary Clinton in the primary by total number of votes – but he had the votes that counted. That is, he had the support of Robert Rubin, City Bank, Jamie Diamond…

Palast: Penny Pritzker, who is currently our unindicted Secretary of Commerce and billionaire banker of the Pritzker family. Obama had those three votes – and they’re the ones that counted! So it’s interesting, even though Hillary says, “Well, I deserve it because I have the most votes.” She deserved it in ’08 but she didn’t have the bankers’ vote. This time she does. But that’s not the issue, I want to talk to you about something that I think should comfort people

I want to tell you about advice I got in a very similar situation from just about the most brilliant man I’ve ever met. Many of you know of him as Satan, and some of you know him as the Reverend Pat Robertson. I was investigating Pat Robertson for The Guardian newspaper, so I went in to meet him secretly wired. Robertson had run, just like Sanders, for president. And just like Sanders, did not get the nomination of his party, the Republican Party. That went to George Bush. So I asked the Reverend Pat Robertson, because he had said that God had told him to run for president, I said, “With a campaign manager like that, how could you have lost?” And Robertson said to me, “The Lord did not tell me to win the presidency. He told me to run.”

Now what that cryptic message meant (and it’s worth Bernie taking notes), as Robertson told me, he may have lost the presidency but his list of followers, 3 million people, became the Christian Coalition. So now is Bernie’s moment. I’m completely non-partisan, but when you change from partisan activity to a movement, then I can say something. This is Bernie’s chance to turn his political moment into a political movement, to create the un-Christian Coalition.

As Pat Robertson told me, nothing moves in the Republican party, you can’t get a nomination for dog catcher anywhere in America without the approval of the Christian Coalition. That later morphed into the other evangelical crew. And we know that you can’t win without them. Trump had to win them over The Republican Party has now been seized by the Evangelical Christian Right.

So they have shown us, through satanic means, what we can do to create a movement to scare the hell out of the Democratic Party. Bernie has a lot more than 3 million followers. He’s bigger than the Christian Coalition. His Un-Christian coalition could shake up American politics, if he doesn’t do a Ralph Nader and run off When Nader ran in 2000, I wasn’t disturbed that he may have taken enough votes to have elected George Bush. What disturbed me is that he didn’t fight for the black people whose votes weren’t counted. He ran away from creating a permanent movement.

Dennis, here’s a pop-quiz: What was the Democratic Party’s position in 2012 on the minimum wage?

Palast: Well, no one knows.

DB: And, no one really cared, right?

For example, instead of arguing over whether there ought to be a vote on the TPP, Bernie’s Un-Christian coalition, 2 years from now, can tell President Clinton, “I hear you are now saying that the Trans-Pacific Partnership trade deal meets your standards and so you’re going to sign it. But it doesn’t meet our standards, so we’re going to take our 7 million members and we’re all going to de-register from the Democratic Party.” Now do you think that Hillary Clinton would continue on such a course? Basically, the Sanders’ people have the ability to veto all the major policies of the Democratic Party, to seize control and have ultimate power within the Democratic Party.

DB: You mentioned the evangelical movement and the role they have played in terms of the power of the new Right.

Palast: Well, one of the things that Sanders did is bring together disparate elements of the left, progressives, and young people. To let that dissipate would be the great crime. It’s even more important than electing Sanders as president. This could be a permanent movement. Now what does this have to do with our usual elections crimes report? This came to me because I was investigating Pat Robertson. And Pat Robertson had created a not-for-profit organization called The Christian Coalition. But because they were involved in politics, after 11 years and after my investigation, they withdrew their application for approval for not-for-profit status by the IRS. Basically Pat Robertson ran a long-term criminal enterprise.

But then, the Supreme Court de-criminalized this activity. Along with Citizens United was the Speech Now decision that said not only could corporations give money to campaigns, but so could not-for-profit organizations, social service charities. So the door is open for the Bernie campaign to become the Bernie movement, and for people to create a not-for-profit coalition for the public as opposed to corporate power, or for whatever purposes the evangelicals operate.

DB: To be clear, what you are saying is, a lot of the energy wasted inside these conventions trying to change the platform is really a bit of a distraction from the energy that can come out of all the platforms that people supported Bernie for at the grass roots level.

Palast: You don’t want to waste your bullet. This convention business is, after all, just a show. It’s theater. There’s no convention. There’s no discussion over whose going to get the nomination. That’s done. It’s a show. Trump has made it clear that he wants the Republican show to even be better, so he’s going to speak all night. It’s burlesque, it’s political striptease. America Has No Political Talent is the show. But if we want to go permanent, if we want to really change this nation, which is what the Sanders’ campaign claims to be about. If you want to have a true Medicare for all, possibility; Clinton has talked about opening up Medicare to people 50 and over, which would be tremendous, if she sticks to it. She’s talked about removing the caps so that rich people have to pay into the social security fund with no cap, which Sanders forced her to do. Sanders forced her to come out against the TPP. Sanders forced her to say she’d re-open NAFTA.

She’s not going to be held to these things when she’s president by looking at her old party platform – that’s a giggle! But she will be held accountable if there are 13 million people in a progressive organization, which Sanders would have to front, which would say, “We are going to withhold our support for the Democratic Party, money, people de-registering, we will have nothing to do with you. These are our demands and we’re holding you to these demands.”

Greg Palast new film on the theft of the 2016 election: The Best Democracy Money Can Buy: A Tale of Billionaires and Ballot Bandits, will be debuted at Net Roots Nation on July 16 in St. Louis.

Dennis J. Bernstein is the executive producer of Flashpoints, syndicated on Pacifica Radio, and is the recipient of a 2015 Pillar Award for his work as a journalist whistle-blower. He is most recently the author of Special Ed: Voices from a Hidden Classroom.

Greg Palast has been called the “most important investigative reporter of our time – up there with Woodward and Bernstein” (The Guardian). Palast has broken front-page stories for BBC Television’s Newsnight, The Guardian, The Nation Magazine, Rolling Stone, and Harper’s Magazine. He is the author of the New York Times bestsellers Bil-lionaires & Ballot Bandits, Armed Madhouse, The Best Democracy Money Can Buy, and the highly acclaimed Vultures’ Picnic, named Book of the Year 2012 on BBC’s Newsnight Review. His books have been translated into two dozen languages.

Greg Palast (Rolling Stone, Guardian, BBC) is the author of The New York Times bestseller, The Best Democracy Money Can Buy, which will be released as a feature documentary movie this fall. Get your name in the movie credits!

Or support the The Palast Investigative Fund (a project of The Sustainable Markets Foundation) by shopping with Amazon Smile.

Dennis J. Bernstein is the executive producer of Flashpoints, syndicated on Pacifica Radio, and is the recipient of a 2015 Pillar Award for his work as a journalist whistleblower. He is most recently the author of Special Ed: Voices from a Hidden Classroom.

Nation of Change is the Publication of Origin for this work. Permission to republish is freely granted with credit and a link back to Nation of Change.