I asked my daughter if she would like to add her own recollections about JK Rowling and the “alternative” Harry Potter endings Jo Rowling told us when we were hanging out in the Green Room at BBC Television Centre. (I provide investigative stories for the BBC current affairs program Newsnight.) My daughter and her oblivious twin brother don’t remember much, but what did leave an impression were my speculations about the untimely and suspicious death of my fellow investigative reporter, Karl Larsson–whom you would know as the fiction writer “Stieg” Larsson.

My daughter interviewed me about Larsson’s work and wrote this report for school. Her mother is allowing me to post it only on condition her by-line gives her nickname only.
Who killed Stieg Larsson?
By Peanut Palast
My dad, Greg Palast, a journalist, became friends with Stieg Larsson who was also a journalist and they were investigating Right-Wing extremists for a newspaper in England. My dad wrote a story proving that Pat Robertson, an American television evangelist, is the Anti-Christ. [Note: This is absolutely true. Here’s the original report from The Guardian, ‘I don’t have to be kind to the Spirit of the Antichrist,’ for which I was nominated Britain’s Business Reporter of the Year -GP] 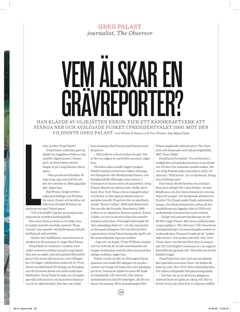 Mr. Larsson was investigating neo-Nazis who had murdered people in Sweden where he lived. Mr. Larsson, whose real name was Karl, put a story about my Dad’s investigation in his Swedish magazine.
My dad said Mr. Larsson was very courageous and that his books weren’t really fiction but a kind of coded warning about a real group of killers.
But, my Dad says, they found out Karl was going to publish the book, and then later he was going reveal how much of it was really true. So they killed Mr. Larsson and made it look like a “heart attack.”
And my Dad thinks he knows the name of the killer. When my dad was in prison for protesting against the war in Vietnam [busted in the big May Day 1970 action–GP], there were a lot of really dangerous people in there. He kept up contacts with them, even after some became really weird “skin heads.”
And they were the ones that told my dad who actually murdered his journalist friend. It was one of my Dad’s old cell mates with him in Azkaban. His name is Sirius Black.
But sometimes I think my dad just makes this stuff up.
[Happy Birthday, Jo Rowling and Harry! Potter-heads know JK Rowling turns 46 today, July 31, and Mr. Potter turns 31. -GP]
***
Forensic economist and journalist Greg Palast, author of the New York Times bestsellers, Armed Madhouse and The Best Democracy Money Can Buy, has investigated  the IMF and World Bank for BBC Television Newsnight and the Guardian Newspapers (London) and Democracy Now! (New York).
Subscribe to Palast’s Newsletter and podcasts.
Follow Palast on Facebook and Twitter.
GregPalast.com