The big boys are confident that Sen. Marco Rubio has locked up the Republican nomination. But who’s locked up Rubio?
I called my bookie in London. The betting professionals were not surprised at Marco Rubio’s big Iowa showing. The smart money has been on Rubio since October 31–despite the fact that Rubio was polling at just 9%.
Paul Krishnamurty, politics odds analyst at Betfair.com, told me that, among professional betters, over just two days, Rubio soared from zero to odds-on favorite to win the GOP nomination.
Why would the guys who bet the rent money place it all on Rubio – and what suddenly changed on October 31? 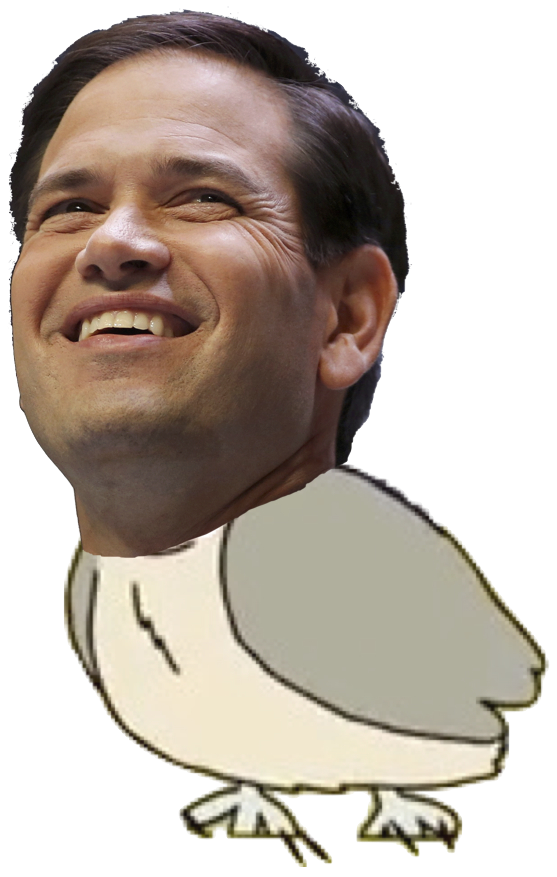 Because, despite the fact that 9 of 10 Republicans rejected him, on Halloween, Rubio won the only vote that counts: The Vulture’s.
It was page one news in the New York Times: Paul Singer, Influential Billionaire, Throws Support to Marco Rubio for President.
I’ve been hunting Singer, AKA The Vulture, for nine years across four continents. And now the carrion-chewing billionaire has decided who will be your next President.
The Vulture, not the Kochs, has become the Number One funder of the Republican Party. The Vulture’s blessing signals to the other billionaires where to place their bets.
Singer doesn’t “donate” to candidates. He invests in them. And he expects a big, dripping return on his money.
But why Rubio? Because Singer’s little hatchling is doing The Vulture’s bidding already. Singer has launched a murderous financial “vulture” attack on Argentina. Singer is shaking down the gaucho nation for $3 billion.
Here’s the story. Decades ago, Argentina’s military dictatorship issued bonds that sucked the nation dry. When democracy returned, 97% of the banks that had funded the dictatorship agreed to take a low payment for these bonds.
Then down swooped The Vulture. Singer and his partners bought up the “hold-out” 3% for $50 million – and now Singer demands that Argentina pay him $3 billion, a 6,000% return on his “investment”-or he’ll bring Argentina to its knees.
That’s why he’s called The Vulture – because Singer has used this same junk-bond ransom trick to swipe aid funds meant for cholera clinics in the Congo. (When I uncovered that scheme for BBC Television, Britain’s Parliament banned Singer’s vulture fund from British courts. His operations are outlawed throughout most of the civilized world.)
But The Vulture has a problem: Hillary Clinton. As Secretary of State, Clinton went to court on Argentina’s side and body-blocked every ugly attempt by The Vulture to savage Argentina.
Singer is screeching. A President Hillary would cost Singer billions. (As would a President Sanders, a stalwart foe of vulture financiers.) To counter Hillary, The Vulture hatched a Senator: one Marco Rubio. Senator Rubio has made several ethically dubious attempts to bully the Treasury and State Departments on Singer’s behalf.
That failed, so Singer has decided to put the anti-gay martinet Rubio into the White House. (Singer’s son is married to a man-but hey, to Singer, a feast of billions means more to him than family.)
Yet Singer knows you can’t put a Rubio in the Oval Office by winning the most votes. No way. Changing demographics doom almost any GOP candidacy.
The only way to take the White House is to block the vote of millions of voters of color.
And that’s why Singer has become donor Numero Uno to Karl Rove’s operation Crossroads.
I’ve been on the trail of racist vote suppression tactics since 2000 when Katherine Harris was Purge’n General. And behind so many of the moves to disenfranchise voters, all too successful, is the Rove operation.
Now I’m on the hunt again. I’m in the middle of ripping the lid off the biggest, most secretive vote suppression operation since Jim Crow was law.
I’m in the thick of making the movie, The Best Democracy Money Can Buy: A Tale of Billionaires & Ballot Bandits, about the coming attempt to swipe the 2016 election through ugly-but unbelievably sophisticated-vote suppression trickery.
For BBC Television, The Guardian and Rolling Stone, I’ve been on the beat of ballot bandits – and the billionaires behind them for 16 years. This film – and a related series of articles, web videos, and a book – which we must release in Spring 2016 – has one aim: to save The House I Live In, the America of Martin Luther King and Franklin D. Roosevelt.
This is not about whether Rubio or Clinton or Sanders or any other candidate should win. This is about making sure that the ballots, not the billionaires, determine the election.
I’m asking you to help me complete this documentary.
And we’ll be covering The Vulture and his hatchling.
Singer’s knuckle-draggers muscled me out of his Rubio fundraiser last month-when my disguise fell off. No kidding. So I have to try again.
While The Best Democracy Money Can Buy movie will have heavyweight, real, undercover, no-BS investigative reporting, it will present the eye-popping truth in an eye-popping manner, with all the humor and heart you expect from a Palast team film.
Watch this sneak peek.
I am asking you, to add your name as a Producer or co-Producer of this film (for a tax-deductible donation of $1,000 or $500 respectively) and you will receive a movie producer credit and an invite to join me at our opening in Hollywood. (You can, of course, choose to remain anonymous.)
For a $100 donation, you’ll be listed in the film credits as a supporter – and receive the signed DVD of the film.
Or support the film for any amount you can, no matter how small or large.
Please make this donation to our foundation right now.
I can’t thank you enough for your support-not just financial, but your vote of confidence in me and my team’s work over the years.
It’s what keeps us going.
* Paul “The Vulture” Singer by Rob Bischoff from the film, ‘The Best Democracy Money Can Buy’ ©Palast Investigative Fund
* * * * *
Later this year, Greg Palast will be releasing his new feature film The Best Democracy Money Can Buy: A Tale of Billionaires and Ballot Bandits, which includes his award-winning investigation Jim Crow Returns.
Greg Palast is the author of several New York Times bestsellers including The Best Democracy Money Can Buy and Billionaires & Ballot Bandits, Armed Madhouse and the highly acclaimed Vultures’ Picnic.
Make a tax-deductible donation and support our ongoing investigation into voter suppression.
Subscribe to Palast’s Newsletter.
Follow Palast on Facebook and Twitter.
www.GregPalast.com