What Do You Call a Failed Insurrection? PRACTICE

[Washington, January 6, 2025] Take a Red Pill and join me in the future for the reading of the electoral vote. The year is 2025. It’s 1pm on January 6 and Vice-President Kamala Harris has begun opening the envelopes with the electoral vote from each state, alphabetically. 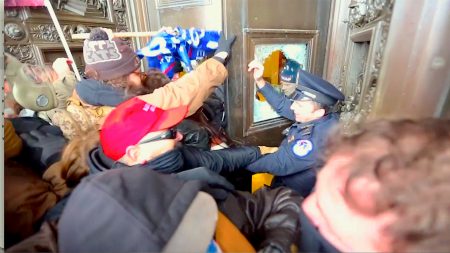 Republicans, holding the majority in the House since the 2022 mid-terms, have rejected Biden’s Electors from Georgia, Arizona, Wisconsin and Michigan. Vice-President Harris is therefore compelled to invoke the Constitution’s procedure for disputed elections outlined in the Twelfth Amendment.

Under this little-known Constitutional process, each state receives but a single vote. Republicans control the Congressional delegations of 27 states. Though that represents just a tiny portion of America’s voters, Donald Trump wins “re-election” with a vote of 27 to 23. Trump will be inaugurated, for a second time, on January 20, 2025.

Yes, it CAN happen here

You’re thinking, “Palast, do you really believe this could happen?”

Forget the whack-jobs who invaded the Capitol one year ago today. These “insurrectionists” were schmucks with no chance of overturning the election. (I don’t dismiss the gravity of their actions — they crushed the skull of a policeman and threatened other murders in the hall of the people.)

But truly, the real danger was in the Oval Office when, two days earlier, Trump peddled a memo by attorney John Eastman. Eastman’s memo laid out, in detail, the dark scenario I described above, in which Republicans use the Twelfth Amendment to overturn the choice of the voters.

And if you think the US Supreme Court will block this coup d’état, fuhgeddaboudit.

The Supremes have already relied on Article II to bless a coup against democracy: In 2000, the Court adopted the Florida Legislature’s certification of the Electors for George W. Bush before the ballot count was completed. Sec. of State Katherine Harris stopped count when Bush was ahead by a teensy 537 votes — yet 178,000 ballots had not been tallied, ballots concentrated in Jacksonville and other African-American majority towns. The GOP-controlled legislature chose the Bush electors.

How to Stop a Coup

As a journalist, it’s not my job to tell you whether Biden or Trump should be President. How about we let the voters make that choice? But that’s not easy. 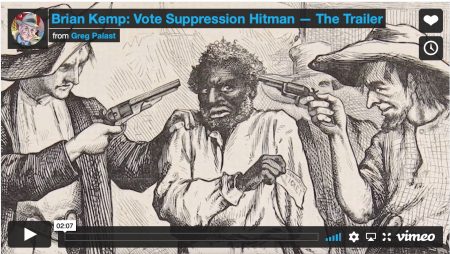 And once again, it will come down to Georgia, Arizona, Michigan and Wisconsin — where voting is about to get a lot harder for people of color, as we’ve uncovered in our latest investigation.

This year, vigilante “vote fraud” hunters have challenged the right of 360,000 Georgians to cast their ballots. If they succeed in this mass voter purge, combined with other vote suppression trickery in the new law SB 202, Democratic Senator Raphael Warnock’s re-election is in real danger, no matter the will of the voters.

The following scenario is then more than possible in January 2025: Warnock loses, throwing US Senate control to the GOP; the House goes Republican as well. In 2024, the Democratic presidential candidate wins Georgia, as in 2020, by just 12,000 votes.

But then, the Georgia legislature, citing alleged vote fraud by Democrats, certifies a slate of Electors committed to Trump. Gov. Stacey Abrams, who gets elected despite vote suppression headwinds, sends a competing slate of Electors to Congress.

The Twelfth Amendment (and the empowerment of state legislatures in Article II) gives the new Republican Congress the power to choose the Trump slates. And this time, the GOP Senators and Reps, watching what has happened to the careers of anti-Trump Republicans, fall in line and let the Twelfth Amendment take its dark course.

Then it’s Hail to the Thief.

Can we stop this coup? Yes, but only before it happens: by protecting the vote in Georgia and other swing states. If we wait until 2024, it will be too late. The work begins this midterm year.

And while we’re at it, repeal the Constitution

Did our Founding Fathers make an unintended error in designating state legislators, not voters, the power to choose our President?

Nope. Historians like to say the Declaration of Independence gave America its democracy, and the Constitution took it away. John Adams, our second President, was thrilled that Thomas Jefferson was excluded from writing the Constitution, and Jefferson’s furious objection to it mostly ignored. Adams warned against creating this dangerous thing democracy, which he termed the instrument of “the firewomen, badauds, the stage players, the atheists, the deists, the scribblers for any cause at three livres a day, the Jews,” and other such undesirables who would “destroy all nobles.”

So, our founding nobility chose the nobles of each state, the legislators, all then landed gentry, to choose the Electors who would in turn, choose the President.

Indeed, if you are a fan of democracy, it’s hard to find a clause in the Constitution worth defending. What kind of “democracy” gives two Senate seats to West Virginia, an equal number to California, and none to Washington DC? Let us give thanks for the Bill of Rights which put some limits on this Constitutional monstrosity.

So, should we junk the Constitution? Well, that’s a discussion for another day, probably another century.

In the meantime, let’s start, today, with protecting the fragile little shards of democracy still left to us.

Warning: Trump and his Rioters can win using “The XII”