I Went To School With The Vegas Shooter 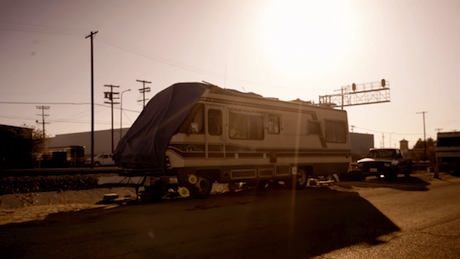 Mobile home on tracks, Sun Valley CA, birthplace of the Vegas shooter. From the film The Best Democracy Money Can Buy.

[Los Angeles] When we were at Francis Polytechnic High in Sun Valley, Steve Paddock and I were required to take electrical shop class. At Poly and our junior high, we were required to take metal shop so we could work the drill presses at the GM plant. We took drafting. Drafting like in “blueprint drawing.”
Paddock. Palast. We sat next to each other at those drafting tables with our triangular rulers and #2 pencils so we could get jobs at Lockheed as draftsmen drawing blueprints of fighter jets. Or do tool-and-dye cutting to make refrigerator handles at GM where they assembled Frigidaire refrigerators and Chevys.
But we weren’t going to fly the fighter jets. Somewhere at Phillips Andover Academy, a dumbbell with an oil well for a daddy was going to go to Yale and then fly our fighter jets over Texas. We weren’t going to go to Yale. We were going to go to Vietnam. Then, when we came back, if we still had two hands, we went to GM or Lockheed.
(It’s no coincidence that much of the student population at our school was Hispanic.)
But if you went to “Bevvie” – Beverly Hills High – or Hollywood High, you didn’t take metal shop. You took Advanced Placement French. You took Advanced Placement Calculus. We didn’t have Advanced Placement French. We didn’t have French anything. We weren’t Placed, and we didn’t Advance.
Steve was a math wizard. He should have gone to UCLA, to Stanford. But our classes didn’t qualify him for anything other than LA Valley College and Cal State Northridge. Any dumbbell could get in. And it was nearly free. That’s where Steve was expected to go, and he went with his big math-whiz brain. And then Steve went to Lockheed, like we were supposed to. Until Lockheed shut down plants in 1988. Steve left, took the buy-out.
And after NAFTA, GM closed too.
Land of Opportunity? Well, tell me: who gets those opportunities?
Some of you can and some of you can’t imagine a life where you just weren’t give a fair chance. Where the smarter you are, the more painful it gets, because you have your face pressed against the window, watching THEM. THEY got the connections to Stanford. THEY get the gold mine. WE get the shaft.
This is where Paddock and Palast were bred: Sun Valley, the anus of Los Angeles. Literally. It’s where the sewerage plant is. It’s in a trench below the Hollywood Hills, where the smog settles into a kind of puke yellow soup. Here’s where LA dumps its urine and the losers they only remember when they need cheap labor and cheap soldiers when the gusanos don’t supply enough from Mexico.
I’ll take you to Sun Valley. It’s in my film, The Best Democracy Money Can Buy. In the movie, a kind of dream scene, the actress Shailene Woodley takes me back to my family’s old busted home in the weeds and then down San Fernando Road, near Steve’s place. Take a look, America. Along the tracks that once led in to the GM plant, you see a bunch of campers that the union men bought for vacations. Now they live in them.
No, Steve’s brain was too big to end up on the tracks. He lived in empty apartments in crappy buildings he bought, then in a barren tract house outside Reno. I laugh when they say he was “rich.” He wanted to be THEM, to have their stuff. He got close.
It’s reported that Steve was a “professional gambler.” That’s another laugh. He was addicted to numbing his big brain by sitting 14 hours a day in the dark in front of video poker machines. He was a loser. Have you ever met a gambler who said they were a Professional Loser?
It’s fair to ask me: Why didn’t I end up in a hotel room with a bump-stock AR-15 and 5,000 rounds of high velocity bullets?
Because I have a job, a career, an OBSESSION: to hunt down THEM, the daddy-pampered pricks who did this to us, the grinning billionaire jackals that make a profit off the slow decomposition of the lives I grew up with.
But I’m telling you, that I know it’s a very fine line, and lots of crazy luck, that divided my path from Paddock’s.
Dear Reader: The publication that pulled this story at the last moment was plain scared – that they’d be accused of approving murder.
Paddock slaughtered good people, coldly, with intense cruelty, destroying lives and hundreds of families forever. If you think I’m making up some excuse for him, then I give up.
But also this: The editor of the Beverly Hills-based publication, a Stanford grad, could not understand that, just like veterans of the Vietnam war who suffer from PTSD even today, so too, losers of the class war can be driven mad by a PTSD that lingers, that gnaws away, their whole lives.

What happens to a dream deferred? Does it …fester like a sore? Does it stink like rotten meat? Sag…like a heavy load?
Or does it explode?

Steve, you created more horrors than your cornered life could ever justify.
But, I just have to tell you, Steve: I get it.

*****
Before turning to journalism as an investigative reporter for The Guardian and BBC Television, Greg Palast was an investigator of fraud and racketeering for governments and labor unions worldwide. His investigations have appeared in Rolling Stone, Harper’s and New Statesman. Known as the reporter who exposed how Katherine Harris and Jeb Bush purged thousands of Black voters from Florida rolls to steal the 2000 election for George Bush. Palast has written four New York Times bestsellers, including Armed Madhouse, Billionaires & Ballot Bandits, and The Best Democracy Money Can Buy, now out as major motion non-fiction movie: The Best Democracy Money Can Buy: The Case of the Stolen Election (the brand new, updated, post-election edition).
Stay informed, get the signed DVD, a signed copy of the companion book – or better still, get the Book & DVD combo.
Visit the Palast Investigative Fund store or simply make a tax-deductible contribution to keep our work alive! Alternatively, become a monthly contributor and automatically receive Palast’s new films and books when they’re released!
Or support the The Palast Investigative Fund (a project of The Sustainable Markets Foundation) by shopping with Amazon Smile. AmazonSmile will donate 0.5% of your purchases to the Palast Fund and you get a tax-deduction! More info.
Subscribe to Palast’s Newsletter.
Follow Palast on Facebook and Twitter.
GregPalast.com