Why We Should Applaud Trump’s Tariffs 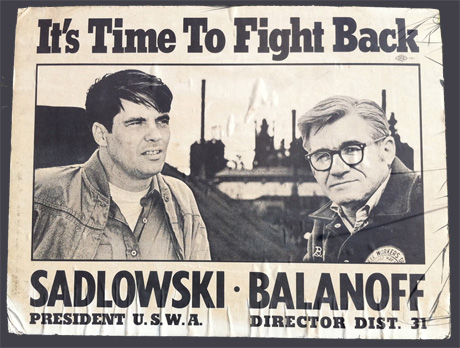 [Image: Palast worked as a negotiator and investigator for the Steel Worker’s Union when Ed Sadlowski ran the Chicago-Gary district.]
Have Progressives lost their minds? We protested in Seattle against a tariff-free world in which workers in every nation are pitted in a contest to see who will work for lowest wages. The majority of Democratic senators voted against NAFTA.
In 2016, the Democrats lost Pennsylvania, Ohio, Michigan, and Wisconsin by theft for sure, but it would not have been close enough to steal except that Obama was pushing the TPP and Hillary free trade.
The idea of free trade with a slave state like China is a terrible joke played on America’s working class.
Do we hate Trump so much that we are obliged to attack when he does the right thing for the American worker?
Obama slapped heavy tariffs on Chinese auto parts before the 2012 election, and didn’t start a trade war. But he did win Ohio.
Will tariffs raise the price of steel? Yes, it is the price of keeping Pennsylvania alive. Pollution controls also raise the price of steel but it is the price of keeping our planet alive.
Sometimes, principles must trump politics. (Pun intended.)
* * * * *
Before turning to journalism as an investigative reporter for The Guardian and BBC Television, Greg Palast was an investigator of fraud and racketeering for governments and labor unions worldwide. Known as the reporter who exposed how Katherine Harris and Jeb Bush purged thousands of Black voters from Florida rolls to steal the 2000 election for George Bush, Palast has written four New York Times bestsellers, including Armed Madhouse, Billionaires & Ballot Bandits, and The Best Democracy Money Can Buy, now a major non-fiction movie. The post-election update of the movie, subtitled The Case of the Stole Election, has just been released on Amazon and can be streamed for FREE by Prime members!
Stay informed, get the signed DVD of the updated, post-election edition of The Best Democracy Money Can Buy: The Case of The Stolen Election, a signed copy of the companion book or better still, get the Book & DVD combo.
Visit the Palast Investigative Fund store or simply make a tax-deductible contribution to keep our work alive! Alternatively, become a monthly contributor and automatically receive Palast’s new films and books when they’re released!
Or support the The Palast Investigative Fund (a project of The Sustainable Markets Foundation) by shopping with Amazon Smile. If you use Smile, Amazon will donate 0.5% of your purchases to the Palast Fund and you get a tax-deduction! Click here for more info.
Subscribe to Palast’s Newsletter. Follow Palast on Facebook, Instagram, and Twitter.
GregPalast.com