We have nothing to sell but fear itself 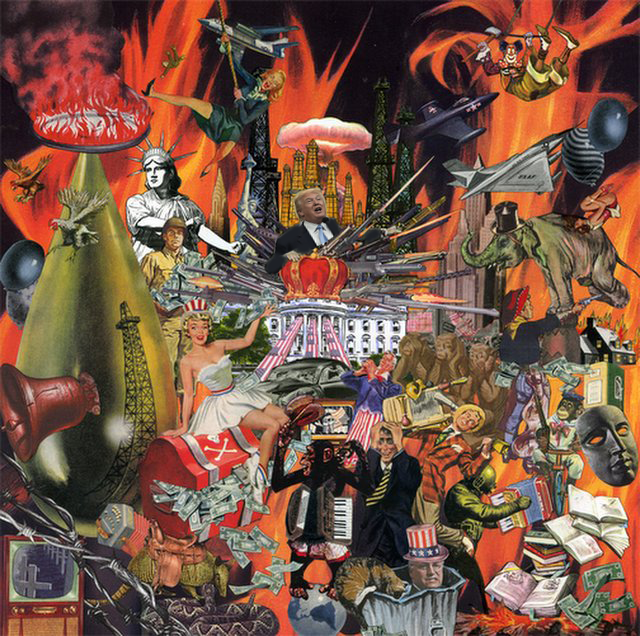 Fear is the sales pitch for many products: from war on the Euphrates to billion-dollar submarines. Better than toothpaste that makes your teeth whiter than white, this stuff will make us safer than safe. It’s political junk food, the cheap filling in the flashy tube.
True security for life’s dangers – from a real national health insurance program to protecting teachers’ jobs, would take a slice of the profits of the owning classes, the Lockheeds, the JP Morgans. The War on Terror has become class war by other means.
And who will get us next? Don’t assume they’ll be clutching Korans. Until September 11, 2001, the deadliest terror attack in American history was carried out by an all-American Gulf War veteran.
Outside the war zones we create, organized terror’s power is diminishing, and for politicians, especially The Donald and Ted Cruz, that is a political problem. That’s why this latest mayhem by a sick-o ISIS wannabe couple was such a boon to the panic salesmen in Washington. They needed a new terror fix. Even if it wasn’t the real ISIS, it was enough for candidates to mainline
into the body politic a big, fat dose of fear.
Once they have the media all jumped up on a new fear high, some presidential candidates, and sadly too, our President The Drone Ranger, can resume their sales pitch for their two-barrel cure: less liberty, more weaponry.
Our leaders are counting on cowardice in the hearts of the Heart-land. The Republicans’ unstated election campaign slogan is, “They are coming to get us.” Americans, scared for their lives, soil their underpants and waddle to the polls crying, “Donald, save us!”
It began with the September 11 attacks.  From his bunker, Dick Cheney created a government that is little more than a Wal-Mart of Fear: midnight snatchings of citizens for uncharged crimes, wars to hunt for imaginary weapons aimed at Los Angeles, DNA data banks of kids and grandmas.
In 1933, Franklin Roosevelt calmed a nation when he said, “We have nothing to fear but fear itself.”
Today, our would-be presidents all but admit, “We have nothing to sell but fear itself.”
*
Adapted from Armed Madhouse, the New York Times bestseller by Greg Palast.  Signed copy here.
* * * * * * * *
Greg Palast is the author of the New York Times bestsellers, Billionaires & Ballot Bandits, The Best Democracy Money Can Buy and Armed Madhouse and Vultures’ Picnic.
Make a tax-deductible donation and keep our work alive.
Subscribe to Palast’s Newsletter and podcasts.
Follow Palast on Facebook and Twitter.
www.GregPalast.com