Was Tim Griffin merely a “Rove-bot”?
Did Karl Rove write the memos that dunked candidate Griffin in hot water?

Illustration from Steal Back Your Vote Comic book voterguide.
To learn more click on the image.

Greg Palast, the journalist who blew the whistle on Republican vote suppression activities in Florida (“caging”), has communicated with me further following an e-mail I passed along this morning. He has a theory on Republican congressional candidate Tim Griffin’s involvement in the scheme
Palast’s report:

When Tim Griffin resigned his post as interim federal prosecutor a day after the BBC broadcast linking him to illegal “voter caging,” Griffin insisted he did not know what “caging” was.
Griffin, currently the Republican candidate for Congress in Arkansas’s Second District, said he only found out after the BBC report that “caging” is a term “used in the direct mail” business.
That’s correct, Mr. Griffin: it’s an address capture scheme which, when used against voters of color, is a federal crime.
Right here, printed above, is an email sent by Griffin with the subject line, “Caging” with lists attached of soldiers and homeless men whose votes the Republican National Committee wanted the Bush campaign to challenge.
So, if Griffin’s name is listed as the author of the “caging” memo, how the heck could he not know what he was saying and sending? 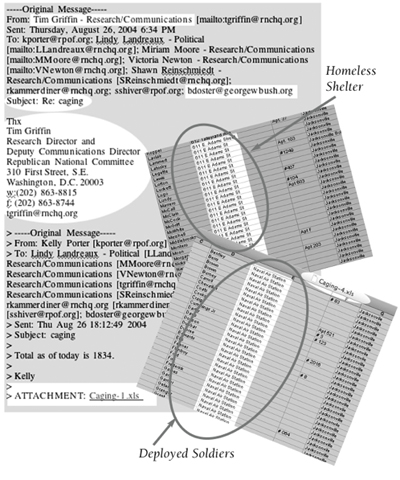 There are two possible answers:
1. Griffin is lying, or
2. He didn’t understand the content of his note because, in fact, it was written by SOMEONE ELSE who told Griffin to send it from Griffin’s email account.
Who could that be?
Fact: It is well known that Griffin’s mentor and boss, Karl Rove, did not have his own computer to avoid a subpoena for his emails.
Fact: Karl Rove was the founder of Karl Rove & Co, a direct mail firm which would have used highly sophisticated (legal) caging programs.
Given these facts, the Arkansas Times has asked Mr. Griffin if he would tell us if he originated and understood the memo (in which case he lied), or if he was sending the email on behalf of a caging expert who happened to be his boss, Mr. Rove.
In 2007 and 2008, on behalf of the British Broadcasting Corporation, I requested this information from both Mr. Griffin and Mr. Rove. (Little Rock readers will be interested to know that Griffin’s conduct is an international issue, seen worldwide as a key and sad example of vote rigging in our country.)
What we know for sure is this: We have a smoking gun here. Therefore, the Republican National Committee research office, when headed by Griffin, could have been a crime scene. Answers from Mr. Griffin could tell us, with certainty, “who done it.”
We’re waiting, Mr. Griffin.
Editor’s note: Ernie Dumas, who’s written extensively about the U.S. attorney firing scandal and Tim Griffin’s political activities, notes that in the inspector general report it recounts how Griffin went to see Mark Pryor while they were still contemplating nominating him for U.S. attorney and going through the confirmation process. It says he was accompanied by a lawyer from the Justice Department. The IG interviewed her about what happened. She said Pryor asked Griffin about the caging and if he was involved in the direct marketing scheme. She said Griffin told Pryor that the decision about what to do with the names the marketing screening turned up was made by someone higher up in the RNC than he. You might call it a variation of the Nuremberg defense. Griffin, of course, decided he didn’t want to give sworn Senate testimony.

Greg Palast’s investigative reports can be seen on BBC Television Newsnight. Palast is author of the New York Times bestsellers Armed Madhouse and The Best Democracy Money Can Buy. He is co-author, with Robert F. Kennedy Jr., of the Rolling Stone investigative report, “Block the Vote.” A not-for-profit charitable trust is offering a voter guide and a comic-book version of this investigation.