Warning: Trump and his Rioters can win using “The XII”
Election won by Fire and Fury—and Loophole in Constitution

Don’t say I didn’t warn you. Six weeks ago, I told Naomi Wolf, on air, that President Donald Trump can win via a constitutional coup d’état—via the first-ever use of the 12th Amendment. And yesterday, Trump let the cat out of the bag: he expects to invoke the 12th Amendment loophole. 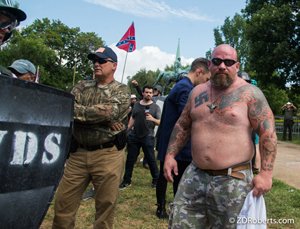 Charlottesville 2017–Rehearsal for November 2020 by Z.D. Roberts for the Palast Investigative Fund

He said, “You think November 3 [decides the election]….at a certain point it goes to Congress.” He was giving away what his minions must have told him: you’ll win using Amendment XII.”

Here’s what I said on August 5. (And thanks to Thom Hartmann for first warning about a “coup d’état by XII.”):

I want people to think about this carefully. For example, the Brooks Brothers Riot with Roger Stone back in 2000 where we saw $1,200 an hour consultants banging on the windows and stopping the vote count. Now we’ll get Boogaloo Boys in Hawaiian shirts with crowbars and pipes who will be smashing the buildings, Molotov cocktails thrown into post offices because our president has said there are a million ballots in these 12 Post Offices from Venezuela and we have to stop the election from being stolen.

There will be protests in the streets on both sides. We already had the test run in Portland. It’s a test run of the unmarked SUVs picking up people as if we were in Peronist Argentina.

And what I’m worried about is that, for example, the Florida legislature, you’ll have two Post Offices on fire, the Miami-Dade County Clerk’s Office is shut down because it’s too dangerous to go in because of the Boogaloo Boys and the Proud Boys. Then what happens is, the rabidly Republican legislature of Florida says it’s too much mayhem, we can’t count the votes in time.

I expect Florida will have 6 million mail-in ballots. The GOP-controlled Florida Legislature will say, we can’t count them in time, so we’re not going to certify the election.

Republicans, who control the legislature, of Michigan, will also say, “We can’t certify the election.”

Imagine: Detroit is in flames and Milwaukee’s in flames. They won’t certify the results.

So, you have three Republican legislatures say it’s mayhem in the streets, it’s martial law, we’ve had curfews, we can’t count the ballots. Therefore, there will be no certification. As a result, no candidate gets 270 votes in the Electoral College because they don’t send the electors.

Real simple: you don’t certify the election, you can’t send your electors, no one gets 270 electoral votes. Then, under the 12th Amendment it goes to the House.

But it’s not Nancy Pelosi who makes the decision. Each state gets a single vote. Wyoming gets the same vote as New York, and Donald Trump is reelected — constitutionally — because our cities are in flames.

Read the Book!
Protect your right to vote!
Spread the word!