And as the Asian-American community becomes increasingly more engaged in the election process, and as their demographic shifts from red to blue, their community has increasingly become a target of the GOP’s mass voter suppression tactics, especially in battleground states like Georgia, as detailed in this chapter from my most recent book. 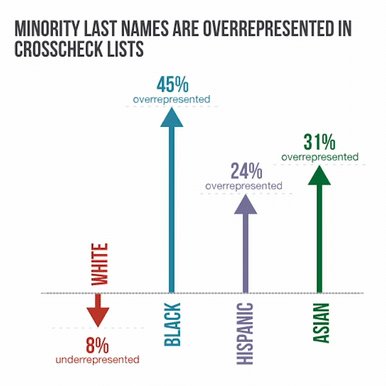 The Rise of Kim Crow

In November 2012, the Georgia Bureau of Investigation, armed and ready for combat, raided an office in northern Atlanta. They seized computer files and prepared for mass arrests.

Georgia is filled with violent white supremacist groups. I stood with a passel of them called The Proud Boys in a Macon rally for Kemp hosted by Donald Trump. (I was disguised because I’m not insane.) The Proud Boys, co-sponsors of the Charlottesville mayhem, were founded by Gavin McInnis (tag line: “Hitler was right. Gas the Jews.”).

But the Georgia G-men didn’t do a damn thing about the Proud Boys. The raid was against a group called “10,000 Koreans Vote.”

Their crime was asking a question: What happened to our voter registrations?

A few facts about Americans of the Asian persuasion: Historically, Asian-Americans are the least voting racial group in America. Until recently, only one in three Asian-Americans voted.

And when they did vote, until 2000, they voted Republican, big time: a huge majority voted for George Bush Sr. over Bill Clinton in 1992. Then, something happened. Beginning with Bush Jr.’s election and accelerating through 2018, Asian-Americans began voting as if they’d turned Black: In 2012, 73% of Asian-Americans voted for Barack Obama.

[Except from The Best Democracy Money Can Buy — get the FREE download!]

Need proof of the change? Check out Voting Gangnam Style on Vimeo. And at the end of one video, one Korean student turns into John Lewis. Excellent joke.

But the GOP wasn’t laughing. They knew that if these citizens were allowed to register and vote at the level of Caucasian-Americans, Stacey Abrams would be Governor of Georgia, and Donald Trump would still be a reality show host.

Why did Asian-Americans switch parties?

Maybe it was the “War on Terror,“ which looked an awful lot like a war on Muslims. And then there’s the Republican war on immigrants, which is new: Ronald Reagan issued the first “amnesty” to undocumented migrants.

And it’s demographics: Asian-American citizens are a young group, more interested in the right to an education than the right to a gun. They liked Obama. He’s cool. Trump weirds them out.

Brian Kemp took notice — and he notified the Georgia Bureau of Investigation.

The key target of the GBI raid was Helen Ho, who had launched 10,000 Koreans Vote. Standing at about 5-foot-nothing, Helen doesn’t look like much of a threat to the state, but she definitely was. A threat to the Good Ol’ Boy network, a threat to Brian Kemp and his plan for the governorship, and the Republicans’ last desperate suck on the pipe of the “Southern Strategy,” that is, winning the Confederacy with race-baiting campaigns.

But for 10,000 Koreans to vote, Helen needed 10,000 Koreans to register. And she was getting to her goal, communicating in Korean to a community very wary of getting involved in politics. In 2014, Helen told me she was warned that she would become a target, that the Asian community would be targeted. And, oh boy, was she right.

The group registered about 4,000 Korean-Americans, concentrated in the 6th Congressional District, which the GOP was fighting uphill to hold. Ten thousand Koreans wouldn’t help them.

Helen grew concerned. The names she’d gathered were not being added to Georgia voter rolls. When she called Kemp‘s office, she was told there were no such registrations, the registration forms didn’t exist.

But, Helen responded, she had copies of the forms. That was a mistake. According to Brian Kemp, it’s illegal to copy a voter registration form. But, if copying forms is barred, how can you prove someone tried to register? You can’t. And that’s the whole point.

When a government acts to prevent voters from registering, that’s a federal crime. A go-to-jail crime. But in Georgia, and too many other states, it’s the victims who face arrest and prison.

Criminal charges hung over Helen and her Korean voter registration volunteers. Ultimately, the bullshit charges were dropped—after two years. But the raid accomplished its real purpose: When I returned to the 10,000 Koreans Vote office in 2017, the door was shuttered, files and computers all gone, registration signs strewn across an empty office. Helen Ho and 10,000 Koreans Vote were effectively shut down.