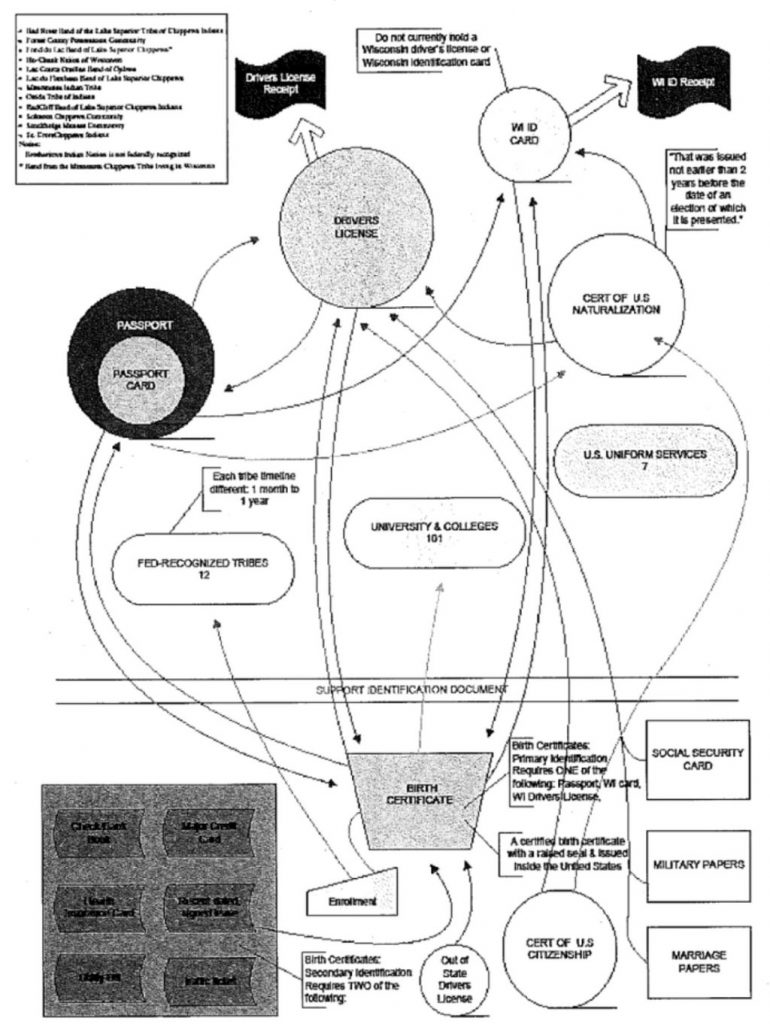 Wisconsin’s ‘How to get a voter ID’ Info Sheet

Arizona isn’t going to be the only place with voting issues this primary season. Today, voters in Scott Walker’s Wisconsin head to the polls. Due to changes in voting laws, there’s a very good chance that there’s going to be a problem.
Wisconsin has some of the strictest voter ID laws in the country and today will be the first time they are tried out during a primary. It’s estimated that hundreds of thousands of Wisconsinites will be disenfranchised thanks to these laws. The hardest hit will be the poor, minorities and college students, i.e. black and blue voters.
Many Wisconsin college students will be out of luck and unable to feel the Bern as their college ID is not acceptable for voting. As some are from out of state – but registered at their college – this leaves them out of luck as their ID doesn’t have their address on it or a signature. With the ways of getting an acceptable ID limited (one office on a campus, with limited hours) and their requests for a new Scott Walker approved college ID card denied, voting in what is likely their first election seems like a no go.
Unfortunately this isn’t the first time we’ve seen this. In 2008 when voter ID laws came to our attention with Crawford v. Marion County Election Board – Indiana was the test case. You might have read about it in our comic book – Steal Back Your Vote or in Billionaires & Ballot Bandits. It was the silly story with the nuns.
Here’s the text that inspired the comic.

Angela Hiss and Allyson Miller both students at Notre Dame were denied the right to vote because they didn’t have the right kind of ID – one that listed their dorm rooms as their residence.
Sujatha Jahagirdar said that her group, INPirg (Indiana Public Interest Research Group) had people watching just a handful of polling places and found a dozen students turned away, adding “we can only guess that this was happening all over the place.” 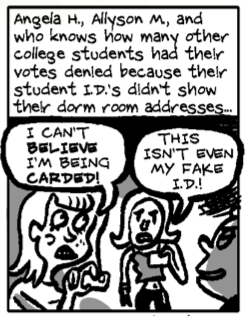 The Young, the old and the minorities – all are hit hard by this law and all statistically Barack Obama voters so one must ask:
So how did we get here?
On April 28, 2008 the United States Supreme Court in their almighty wisdom blessed Indiana’s voter ID law which Terence Evans, the dissenting Court of Appeals judge called “a not-too-thinly-veiled attempt to discourage election day turnout by certain folks believed to skew Democratic.” Justice Souter equated them to the poll taxes of the old south in the courts dissenting opinion.
Indiana is just one of many states that have been making it tougher to vote. Georgia, Louisiana, Arizona and Missouri have all jumped on the bandwagon introducing, or passing their own laws to prevent “vote fraud.” Voter fraud is something that former US Attorney David Iglesias after years of investigations never found one prosecutorial case. For this he was fired. In the DVD, by Greg Palast, “The Election Files” Iglesias called this the Republican “boogeyman.” It didn’t exist.
If you have voting problems please contact VoteRiders or call 866-OUR-VOTE – and always send us your stories via info@gregpalast.com
* * * * * *
For 15 years, Greg Palast has been uncovering voter suppression tactics in investigative reports for BBC Television, The Guardian, Harper’s and Rolling Stone.
Later this year, Greg Palast will be releasing his new feature film The Best Democracy Money Can Buy-A Tale of Billionaires and Ballot Bandits, which includes his award-winning investigation Jim Crow Returns.
The filming is 90% complete but we still need help to get us over the finish line.
Donate and get your name in the film credits!!
Subscribe to Palast’s Newsletter and Podcast.
Follow Palast on Facebook and Twitter.
www.GregPalast.com