Why is Virginia Using BOTH Crosscheck AND ERIC To Purge Voters

Palast speaking on September 9, 2017 at the launch of the Voting Rights Project in Virginia.
There is no reason for Crosscheck in Virginia. There’s not been a single case of someone voting in Virginia and another state. Not one case. It’s a massive disenfranchisement to stop a crime which does not exist.That’s why we don’t really want to improve the way Crosscheck operates, we want to put an end to the whole dishonest, Jim Crow operation.
That said, one of the problems with Crosscheck is that there’s no oversight with regards to how it’s implemented. In 2013, the year Virginia joined Crosscheck, the state removed 41,677 people from the voter rolls. When I interviewed him for my film, The Best Democracy Money Can Buy, Kris Kobach himself said the state had violated the federal law – criminally – by removing those voters. 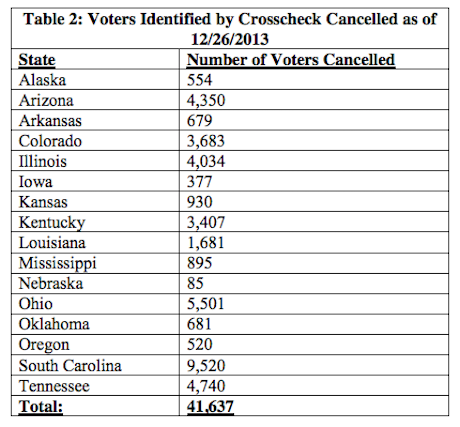 Voters cancelled in Virginia in 2013. Source: Virginia State Board of Elections.
But Virginia also had another purge, using ERIC, which is a non-partisan system for maintaining voters rolls created by a group of founding states in partnership with The Pew Charitable Trusts. Under the ERIC system, states are supposed to use every match, including the last four digits of your Social Security number, which Kobach collects for Crosscheck, but never uses.
ERIC is a much tighter system. It also uses change of address forms, and has a registration side, which states are also supposed to implement. So if someone gets a card because it looks like they’ve moved, they’ll also get a form to help them register in their new state. The ERIC system is supposed to create a net-positive registration because of measures such as this. (I haven’t actually seen it used that way, but it’s supposed to be net-positive.)
Virginia’s in ERIC, and what scares me about Virginia is that tens of thousands of people were removed because of the ERIC review, which was basically, probably, legit people who had moved, etc. Then you had tens of thousands more removed by Crosscheck. Well, if they weren’t caught by ERIC, then it’s suspect that you’re then pulling voters from the rolls because of the Crosscheck list. Those are the people that likely have mismatched middle names, dates of birth, and Social Security numbers – meaning they’re false-positives and clearly not the same people.
So, if states – like Virginia – use both ERIC and Crosscheck, that’s really evil. Now you really know that you’re getting false matches – and purging people from the voter rolls because of them.
The ACLU has objected to using even ERIC, because it gets some false-positives. But compared to Crosscheck, it’s not even on the same planet. Crosscheck is absolutely meant – no question – to wipe out the minority vote. It is designed that way, it works that way, they know it, they continue it, and therefore Crosscheck is on its face a tool of Jim Crow. (In a lawsuit brought by the NAACP and League of Women Voters in Indiana, the legal arguments came down to the fact that Crosscheck is a racist program – see story.)
This is why we’re working with Dee Hunter of DC’s Civili Rights Center to demand that Virginia’s Secretary of State, Terry McAuliffe – one of the last Democratic governors to insist on staying in Kobach’s racist voter purging program – pull out of Crosscheck.
Find out how YOU can help in the fight against Kobach’s racist Crosscheck voter-purging op, by signing up to our newsletter here: bit.ly/StopCrossCheck
*****
Before turning to journalism as an investigative reporter for The Guardian and BBC Television, Greg Palast was an investigator of fraud and racketeering for governments and labor unions worldwide. His investigations have appeared in Rolling Stone, Harper’s and New Statesman. Known as the reporter who exposed how Katherine Harris and Jeb Bush purged thousands of Black voters from Florida rolls to steal the 2000 election for George Bush. Palast has written four New York Times bestsellers, including Armed Madhouse, Billionaires & Ballot Bandits, and The Best Democracy Money Can Buy, now a non-fiction movie.
Stay informed, download the new, #TrumpStoleIt, post-election edition of our hit film, The Best Democracy Money Can Buy, or get the signed DVD, a signed copy of the companion book – or better still, get the Book & DVD combo.
Visit the Palast Investigative Fund store or simply make a tax-deductible contribution to keep our work alive! Alternatively, become a monthly contributor and automatically receive Palast’s new films and books when they’re released!
Or support the The Palast Investigative Fund (a project of The Sustainable Markets Foundation) by shopping with Amazon Smile. AmazonSmile will donate 0.5% of your purchases to the Palast Fund and you get a tax-deduction! More info.
Subscribe to Palast’s Newsletter. Follow Palast on Facebook and Twitter.
GregPalast.com