For Vice Magazine
For BBC Television, Palast met several times with Hugo Chavez, who passed away today.
As a purgative for the crappola fed to Americans about Chavez, my foundation, The Palast Investigative Fund, is offering the film, The Assassination of Hugo Chavez, as a FREE download. Based on my several meetings with Chavez, his kidnappers and his would-be assassins, filmed for BBC Television. DVDs also available.

Venezuelan President Chavez once asked me why the US elite wanted to kill him. My dear Hugo: It’s the oil. And it’s the Koch Brothers – and it’s the ketchup. 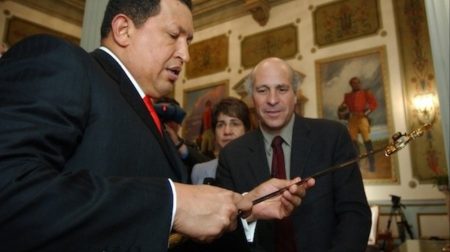 “Hugo Chavez thinks we’re trying to assassinate him. I think that we really ought to go ahead and do it.”

It was 2005 and Robertson was channeling the frustration of George Bush’s State Department.
Despite Bush’s providing intelligence, funds and even a note of congratulations to the crew who kidnapped Chavez (we’ll get there), Hugo remained in office, reelected and wildly popular.
But why the Bush regime’s hate, hate, HATE of the President of Venezuela?
Reverend Pat wasn’t coy about the answer: It’s the oil.

“This is a dangerous enemy to our South controlling a huge pool of oil.”

A really BIG pool of oil. Indeed, according to Guy Caruso, former chief of oil intelligence for the CIA, Venezuela hold a recoverable reserve of 1.36 trillion barrels, that is, a whole lot more than Saudi Arabia.
If we didn’t kill Chavez, we’d have to do an “Iraq” on his nation. So the Reverend suggests,

“We don’t need another $200 billion war.It’s a whole lot easier to have some of the covert operatives do the job and then get it over with.”

Chavez himself told me he was stunned by Bush’s attacks: Chavez had been quite chummy with Bush Senior and with Bill Clinton.

So what made Chavez suddenly “a dangerous enemy”? Here’s the answer you won’t find in The New York Times:
Just after Bush’s inauguration in 2001, Chavez’ congress voted in a new “Law of Hydrocarbons.” Henceforth, Exxon, British Petroleum, Shell Oil and Chevron would get to keep 70% of the sales revenues from the crude they sucked out of Venezuela. Not bad, considering the price of oil was rising toward $100 a barrel.

But to the oil companies, which had bitch-slapped Venezeula’s prior government into giving them 84% of the sales price, a cut to 70% was “no bueno.” Worse, Venezuela had been charging a joke of a royalty ”“ just one percent ”“ on “heavy” crude from the Orinoco Basin. Chavez told Exxon and friends they’d now have to pay 16.6%.

Clearly, Chavez had to be taught a lesson about the etiquette of dealings with Big Oil.

On April 11, 2002, President Chavez was kidnapped at gunpoint and flown to an island prison in the Caribbean Sea. On April 12, Pedro Carmona, a business partner of the US oil companies and president of the nation’s Chamber of Commerce, declared himself President of Venezuela – giving a whole new meaning to the term, “corporate takeover.”

U.S. Ambassador Charles Shapiro immediately rushed down from his hilltop embassy to have his picture taken grinning with the self-proclaimed “President” and the leaders of the coup d’Ã©tat.
Bush’s White House spokesman admitted that Chavez was, “democratically elected,” but, he added, “Legitimacy is something that is conferred not by just the majority of voters.” I see.

With an armed and angry citizenry marching on the Presidential Palace in Caracas ready to string up the coup plotters, Carmona, the Pretend President from Exxon returned his captive Chavez back to his desk within 48 hours. (How? Get The Assassination of Hugo Chavez, the film, expanding on my reports for BBC Television. You can download it for free for the next few days.)

Chavez had provoked the coup not just by clawing back some of the bloated royalties of the oil companies. It’s what he did with that oil money that drove Venezuela’s One Percent to violence.

In Caracas, I ran into the reporter for a TV station whose owner is generally credited with plotting the coup against the president. While doing a publicity photo shoot, leaning back against a tree, showing her wide-open legs nearly up to where they met, the reporter pointed down the hill to the “ranchos,” the slums above Caracas, where shacks, once made of cardboard and tin, where quickly transforming into homes of cinder blocks and cement.

“He [Chavez] gives them bread and bricks, so they vote for him, of course.” She was disgusted by “them,” the 80% of Venezuelans who are negro e indio (Black and Indian) – and poor. Chavez, himself negro e indio, had, for the first time in Venezuela’s history, shifted the oil wealth from the privileged class that called themselves “Spanish,” to the dark-skinned masses.

While trolling around the poor housing blocks of Caracas, I ran into a local, Arturo Quiran, a merchant seaman and no big fan of Chavez. But over a beer at his kitchen table, he told me,

But then came Hugo Chavez, and now the poor in his neighborhood, he said, “get medical attention, free operations, x-rays, medicines; education also. People who never knew how to write now know how to sign their own papers.”

Chavez’ Robin Hood thing, shifting oil money from the rich to the poor, would have been grudgingly tolerated by the US. But Chavez, who told me, “We are no longer an oil colony,” went furthertoo much further, in the eyes of the American corporate elite.

Venezuela had landless citizens by the millions – and unused land by the millions of acres tied up, untilled, on which a tiny elite of plantation owners squatted. Chavez’ congress passed in a law in 2001 requiring untilled land to be sold to the landless. It was a program long promised by Venezuela’s politicians at the urging of John F. Kennedy as part of his “Alliance for Progress.”

Plantation owner Heinz Corporation didn’t like that one bit. In retaliation, Heinz closed its ketchup plant in the state of Maturin and fired all the workers. Chavez seized Heinz’ plant and put the workers back on the job. Chavez didn’t realize that he’d just squeezed the tomatoes of America’s powerful Heinz family and Mrs. Heinz’ husband, Senator John Kerry, now U.S. Secretary of State.

Or, knowing Chavez as I do, he didn’t give a damn.

Chavez could survive the ketchup coup, the Exxon “presidency,” even his taking back a piece of the windfall of oil company profits, but he dangerously tried the patience of America’s least forgiving billionaires: The Koch Brothers.

Elected presidents who annoy Big Oil have ended up in exile-or coffins: Mossadegh of Iran after he nationalized BP’s fields (1953), Elchibey, President of Azerbaijan, after he refused demands of BP for his Caspian fields (1993), President Alfredo Palacio of Ecuador after he terminated Occidental’s drilling concession (2005).

“It’s a chess game, Mr. Palast,” Chavez told me. He was showing me a very long, and very sharp sword once owned by Simon Bolivar, the Great Liberator. “And I am,” Chavez said, “a very good chess player.” 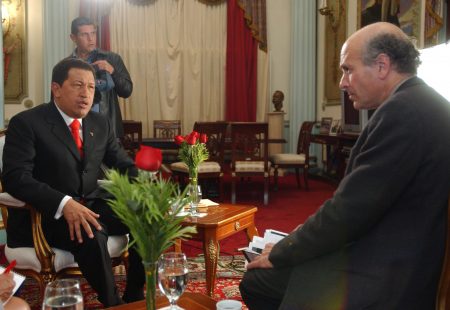 In the film The Seventh Seal, a medieval knight bets his life on a game of chess with the Grim Reaper. Death cheats, of course, and takes the knight. No mortal can indefinitely outplay Death who, this week, Chavez must know, will checkmate the new Bolivar of Venezuela.

But in one last move, the Bolivarian grandmaster played a brilliant endgame, naming Vice-President Nicolas Maduro, as good and decent a man as they come, as heir to the fight for those in the “ranchos.” The One Percent of Venezuela, planning on Chavez’s death to return them the power and riches they couldn’t win in an election, are livid with the choice of Maduro.

Chavez sent Maduro to meet me in my downtown New York office back in 2004. In our run-down detective digs on Second Avenue, Maduro and I traded information on assassination plots and oil policy.

Even then, Chavez was carefully preparing for the day when Venezuela’s negros e indios would lose their king-but still stay in the game.
Class war on a chessboard. Even in death, I wouldn’t bet against Hugo Chavez.

Articles and Reports on Hugo Chavez by Greg Palast
– The Guardian UK
Don’t believe everything you read in the papers about Venezuela
– The Guardian UK
Opec chief warned Chavez about coup
– BBC Newsnight Report (VIDEO):
The Coup Against Hugo Chavez
– Cruisin’ for a Bruisin’ with Hugo
– Venezuela Floridated
– Dick Cheney, Hugo Chavez and Bill Clinton’s Band
– BBC News
Chavez rules out return to cheap oil
– BBC Newsnight Report (VIDEO):
Chavez’s Venezuela – Bush over a Barrel
– The Progressive
George Bush Should Get Down on his Knees and Kiss Hugo Chavez’ Behind
– Fear of Chavez is Fear of Democracy
– Vice Magazine
The Koch Brothers, Hugo Chavez and the XL Pipeline
* * * * * * * *
Investigative reporter Greg Palast covered Venezuela for BBC Television Newsnight and Harper’s Magazine.
Palast is the author of the New York Times bestsellers Billionaires & Ballot Bandits now renamed The Best Democracy Money Can Buy): How to Steal an Election in 9 Easy Steps, The Best Democracy Money Can Buy, Armed Madhouse and the highly acclaimed Vultures’ Picnic, named Book of the Year 2012 on BBC Newsnight Review.
Visit the Palast Investigative Fund’s store or simply make a contribution to keep our work alive!
Subscribe to Palast’s Newsletter and podcasts.
Follow Palast on Facebook and Twitter.
www.GregPalast.com