US Cannibals in Haiti
... and other tales of Voodoo Economics in the Triste Tropiques

In 2004, a group of murderous gangsters who called themselves The Cannibals led an insurrection against Haiti’s first democratically elected President, Jean-Bertrand Aristide. US President George W. Bush immediately, swiftly sided with The Cannibals, now renamed, more palatably, “The National Revolutionary Front for the Liberation of Haiti.”

Bush sent 1,000 US Marines who, like the assassins last week, broke into the quarters of the newly-elected President and, according to a frantic call from his wife to a US Congresswoman, seized Aristide and gave him a choice: resign or die. Aristide, a Roman Catholic priest, chose life. He was then kidnapped by the Marines and taken to a French colony in Africa.

(Later, Aristide told Oakland attorney Walter Riley that the Marines seized the book he was reading, The Best Democracy Money Can Buy, and asked if I could replace it. I did.)

We can’t understand the tragedy of Haiti, how it became our Hemisphere’s basket case, without understanding who put Haiti in the basket: the colonial and financial powers who locked the nation in political-economic shackles for half a millennium…up through to this week.

Let’s take a random walk through the history of Haiti’s defenestration. 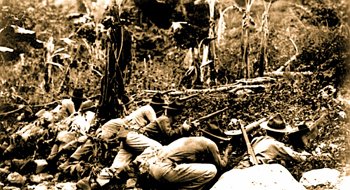 *  In 1791, Toussaint Louverture led the world’s one and only successful mass rebellion of the enslaved that, in 1804, birthed the founding of the sovereign nation of Haiti. Haiti was the first nation to pay reparations for slavery — to the slave holders. Annually, even past World War II, impoverished Haiti paid France a total of $21 billion in gold for the lost income of the slavers.

*  Aristide’s mistake was to ask the United Nations to force France to return the $21 billion, swiftly leading to the US backed coup d’état.

*  The 2004 invasion was one of a series of US attacks, beginning with President Andrew Jackson, and including occupation of the island beginning in 1915 to protect the US-owned Haitian American Sugar Company. The Marines only left in 1934 when FDR officially gave Haiti back to the Haitians (temporarily). 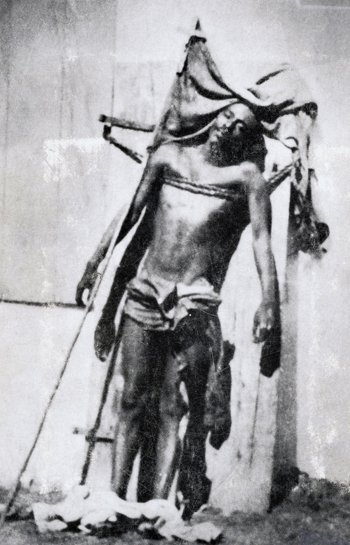 Body of Charlemagne Péralte, whose body was nailed up to a door in the town of Hinche following his killing by members of the USMC. Image taken by US forces and published to demoralise Péralte’s remaining followers.

*  For three decades to 1986, the US supported the Duvalier dictatorship. Papa Doc and Baby Doc Duvalier looted an estimated 80% of international aid funds.  The Duvaliers, supported by the US to stop the spread of socialism from Cuba, fought America’s cold war with a voodoo militia, the Tonton Macoutes. They murdered a reported 60,000 opponents of the regime.

* Aristide returned after the coup and exile and accepted $2 billion in aid from President Hugo Chavez of Venezuela, plus desperately needed low-cost oil (the “PetroCaribe” program). The US cut off aid. The US was affronted by the acceptance of Chavez’ assistance. The US was not affronted that Haitians, the poorest citizens of this hemisphere, survived on $2 a day. (Today, 69% of Haitians still earn less than $2 a day.)

*  The Haitian Supreme Court recently released a finding that the lately departed “President” Jovenel Moise and his confederates looted much of that Venezuelan money. I put “President” in quote marks because, while he held office until his assassination, his term had expired last year. But he continued to hold on to power and was endorsed by the US Ambassador. The US State Department is grateful to Moise for backing the endless attempts to overthrow the current government of Venezuela.

*  And to add to this tale triste tropique, there was the earthquake. In 2010, a quarter million Haitians died. Their cheap-build homes and buildings crumbled on top of them. 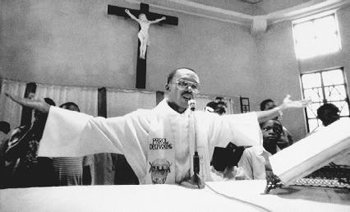 *  But this was not an Act of God. It was an ACT of the IMF, of the international financial agencies who practiced a form of voodoo called “austerity” and “restructuring,” a belief of zombie-fied economists that desperately poor nations could improve their condition by cutting their budgets, ending public services and selling off public property to foreign interests. The result was a nation so devastated that a little shake collapsed all infrastructure.

*  As if Haiti hadn’t suffered enough, President Obama put two well-known grifters in charge of receiving and handing out recovery funds, Bill Clinton and George W. Bush. While the actor Matt Damon gave a $2 million donation for a desalinization plant to provide half a million Haitians with drinkable water, the Clinton Bush Haiti Recovery Fund —the name alone should give you chills — helped build a Marriott Hotel Resort (locals could eat all the barbed wire they wanted) and invested in a clothing factory which produced mostly donations from the factory owner to the Clinton Foundation. 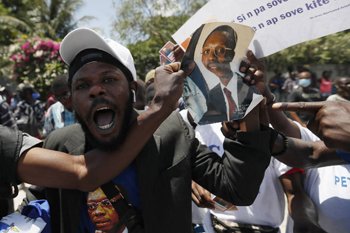 * Last week, the New York Times ran what it called a “News Analysis” of Haiti’s new crisis, telling us, in extra large type: “Foreign aid seems only to have helped perpetuate some of the country’s biggest troubles.” This is the international version of the “Welfare Queen” myth — give these dark-skinned people money and it just corrupts them. Don’t waste our time, our tax money, our sympathy.

It’s an oft-told excuse for the cruelty of empires. The English were convinced that giving food to the Irish during the Potato Famine would just feed their natural indolence. The Germans used the same line in 2009 to impose starvation on the “lazy Greeks” when bankers crashed the euro.

Now, our elites wag a censorious finger at the victims of centuries long physical and financial enslavement. But it is not aid that perpetuates Haiti’s troubles.

Rather, this is a nation that for centuries has been looted and polluted with imperious blessing for imperial profit.

It is time to abolish Haiti’s enslavement.

Economist Greg Palast is the author of The Best Democracy Money Can Buy and other works of investigative journalism.