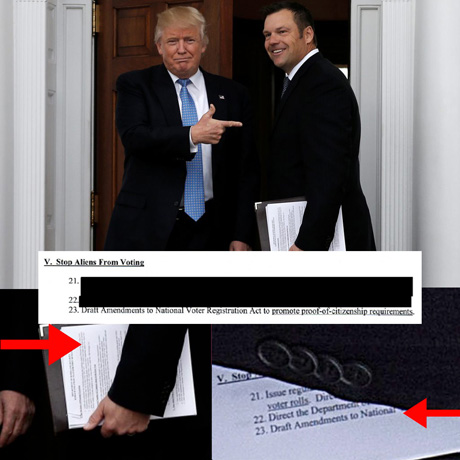 On Friday, August 6, thanks to a lawsuit filed by the ACLU, a federal judge unsealed two documents relating to Kris Kobach’s proposed amendments to the National Voter Registration Act (a.k.a. the “motor-voter law”).

The first document was a memo that Kobach brought to a meeting with President-elect Trump in November 2016, which was partially exposed during a photo op and revealed that Kobach wants to “stop aliens from voting” by drafting amendments to the National Voter Registration Act “to promote proof of citizenship requirements.” The second unsealed document offers more insight into precisely how Kobach intends to do this. 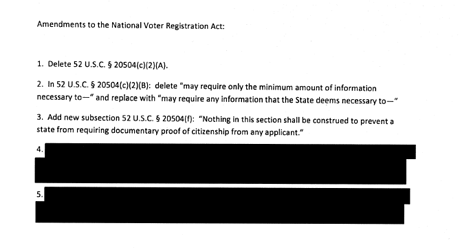 As we’ve previously reported, the requirement to prove citizenship to vote already stopped 36,000 Kansas students from voting because they didn’t have their passport or original birth certificate. Not one was busted as an alien, but all were busted as likely Democrats.

For more on Kobach and Trump’s war on voting rights, get the brand new, updated, post-election edition of our film, The Best Democracy Money Can Buy – which is only available from our store!

*****
Before turning to journalism as an investigative reporter for The Guardian and BBC Television, Greg Palast was an investigator of fraud and racketeering for governments and labor unions worldwide. His investigations have appeared in Rolling Stone, Harper’s and New Statesman. Known as the reporter who exposed how Katherine Harris and Jeb Bush purged thousands of Black voters from Florida rolls to steal the 2000 election for George Bush. Palast has written four New York Times bestsellers, including Armed Madhouse, Billionaires & Ballot Bandits, and The Best Democracy Money Can Buy, now a non-fiction movie.

Stay informed, download the new, #TrumpStoleIt, post-election edition of our hit film, The Best Democracy Money Can Buy, or get the signed DVD, a signed copy of the companion book – or better still, get the Book & DVD combo.