They got him — the big, bad, beheading berserker in Iraq. But, something’s gone unreported in all the glee over getting Zarqawi … who invited him into Iraq in the first place?
If you prefer your fairy tales unsoiled by facts, read no further. If you want the uncomfortable truth, begin with this: A phone call to Baghdad to Saddam’s Palace on the night of April 21, 2003. It was Secretary of Defense Donald Rumsfeld on a secure line from Washington to General Jay Garner.
The General arrived in Baghdad just hours before to take charge of the newly occupied nation. The message from Rumsfeld was not a heartwarming welcome. Rummy told Garner, Don’t unpack, Jack — you’re fired.
What had Garner done? The many-starred general had been sent by the President himself to take charge of a deeply dangerous mission. Iraq was tense but relatively peaceful. Garner’s job was to keep the peace and, to use the President’s words, “Open Iraq’s arms to democracy.”
Unfortunately for the general, he took the President at his word. But the general was wrong. “Peace” and “Democracy” were the slogans.
“My preference,” Garner told me in his understated manner, “was to put the Iraqis in charge as soon as we can and do it in some form of elections.”
But elections were not in The Plan.
The Plan was a 101-page document to guide the long-term future of the land we’d just conquered. There was nothing in it about democracy or elections or safety. There was, rather, a detailed schedule for selling off “all [Iraq’s] state assets” — and Iraq, that’s just about everything — “especially,” said The Plan, “the oil and supporting industries.” Especially the oil.
There was more than oil to sell off. The Plan included the sale of Iraq’s banks, and weirdly, changing it’s copyright laws and other odd items that made the plan look less like a program for Iraq to get on its feet than a program for corporate looting of the nation’s assets. (And indeed, we discovered at BBC, behind many of the odder elements — copyright and tax code changes — was the hand of lobbyist Jack Abramoff’s associate Grover Norquist.) 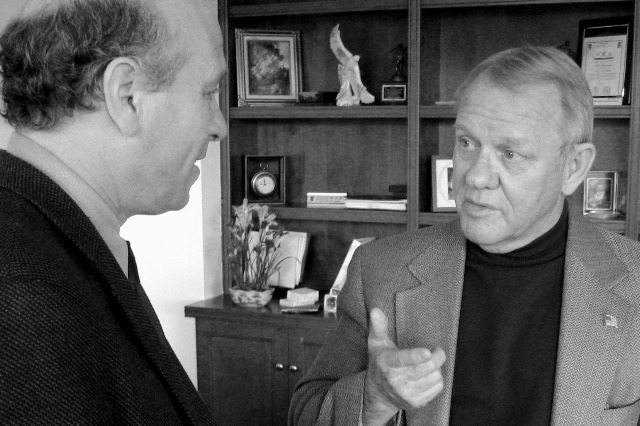 But Garner didn’t think much of The Plan, he told me when we met a year later in Washington. He had other things on his mind. “You prevent epidemics, you start the food distribution program to prevent famine.”
Seizing title and ownership of Iraq’s oil fields was not on Garner’s must-do list. He let that be known to Washington. “I don’t think [Iraqis] need to go by the U.S. plan, I think that what we need to do is set an Iraqi government that represents the freely elected will of the people.” He added, “It’s their country their oil.”
Apparently, the Secretary of Defense disagreed. So did lobbyist Norquist. And Garner incurred their fury by getting carried away with the “democracy” idea: he called for quick elections — within 90 days of the taking of Baghdad.
But Garner’s 90-days-to-elections commitment ran straight into the oil sell-off program. Annex D of the plan indicated that would take at least 270 days — at least 9 months.
Worse, Garner was brokering a truce between Sunnis, Shias and Kurds. They were about to begin what Garner called a “Big Tent” meeting to hammer out the details and set the election date. He figured he had 90 days to get it done before the factions started slitting each other’s throats.
But a quick election would mean the end of the state-asset sell-off plan: An Iraqi-controlled government would never go along with what would certainly amount to foreign corporations swallowing their entire economy. Especially the oil. Garner had spent years in Iraq, in charge of the Northern Kurdish zone and knew Iraqis well. He was certain that an asset-and-oil grab, “privatizations,” would cause a sensitive population to take up the gun. “That’s just one fight you don’t want to take on right now.”
But that’s just the fight the neo-cons at Defense wanted. And in Rumsfeld’s replacement for Garner, they had a man itching for the fight. Paul Bremer III had no experience on the ground in Iraq, but he had one unbeatable credential that Garner lacked: Bremer had served as Managing Director of Kissinger and Associates.
In April 2003, Bremer instituted democracy Bush style: he canceled elections and appointed the entire government himself. Two months later, Bremer ordered a halt to all municipal elections including the crucial vote to Shia seeking to select a mayor in the city of Najaf. The front-runner, moderate Shia Asad Sultan Abu Gilal warned, “If they don’t give us freedom, what will we do? We have patience, but not for long.” Local Shias formed the “Mahdi Army,” and within a year, provoked by Bremer’s shutting their paper, attacked and killed 21 U.S. soldiers.
The insurgency had begun. But Bremer’s job was hardly over. There were Sunnis to go after. He issued “Order Number One: De-Ba’athification.” In effect, this became “De-Sunni-fication.”
Saddam’s generals, mostly Sunnis, who had, we learned, secretly collaborated with the US invasion and now expected their reward found themselves hunted and arrested. Falah Aljibury, an Iraqi-born US resident who helped with the pre-invasion brokering, told me, “U.S. forces imprisoned all those we named as political leaders,” who stopped Iraq’s army from firing on U.S. troops.
Aljibury’s main concern was that busting Iraqi collaborators and Ba’athist big shots was a gift “to the Wahabis,” by which he meant the foreign insurgents, who now gained experienced military commanders, Sunnis, who now had no choice but to fight the US-installed regime or face arrest, ruin or death. They would soon link up with the Sunni-defending Wahabi, Abu Musab al-Zarqawi, who was committed to destroying “Shia snakes.”
And the oil fields? It was, Aljibury noted, when word got out about the plans to sell off the oil fields (thanks to loose lips of the US-appointed oil minister) that pipelines began to blow. Although he had been at the center of planning for invasion, Aljibury now saw the greed-crazed grab for the oil fields as the fuel for a civil war that would rip his country to pieces:
“Insurgents,” he said, “and those who wanted to destabilize a new Iraq have used this as means of saying, ‘Look, you’re losing your country. You’re losing your leadership. You’re losing all of your resources to a bunch of wealthy people. A bunch of billionaires in the world want to take you over and make your life miserable.’ And we saw an increase in the bombing of oil facilities, pipelines, of course, built on — built on the premise that privatization [of oil] is coming.”
General Garner, watching the insurgency unfold from the occupation authority’s provocations, told me, in his understated manner, “I’m a believer that you don’t want to end the day with more enemies than you started with.”
But you can’t have a war president without a war. And you can’t have a war without enemies. “Bring ’em on,” our Commander-in-Chief said. And Zarqawi answered the call.
**********
Greg Palast is the author of Armed Madhouse out this week from Penguin Dutton, from which this is adapted.
Armed Madhouse: Who’s Afraid of Osama Wolf?, China Floats Bush Sinks, the Scheme to Steal ’08, No Child’s Behind Left and other Dispatches from the Front Lines of the Class War. Order it now.