As part of their commitment to providing independent information and resources to their readers, Truthout chooses a “Progressive Pick” every week: an independent book or DVD that they find thought-provoking and insightful. This week, Truthout have selected The Best Democracy Money Can Buy: The Case Of The Stolen Election which has been updated and has just been released on Amazon (and is FREE to Prime members) as their “Progressive Pick”. To mark the occasion, Mark Karlin, the editor of BuzzFlash at Truthout, poses six questions to Palast.
Mark Karlin: Why do you think that the White House closed down the infamous Presidential Advisory Commission on Election Integrity?
Greg Palast: Like any bloodsucking bat, Kris Kobach, who ran the commission for Trump, likes to work in the dark. (Kobach is Target Numero Uno in my film.) Because the Trump /Kobach commission has been bombarded by Freedom of Info requests, Kobach’s gambit is to move his vote-swiping activities into Homeland Security. He thinks, wrongly I hope, that he can hide records on the grounds that removing Black Democrats from the voter rolls is part of the War on Terror.
Karlin: Can you share your speculation on what is the material that the commission is destroying?
Palast: Kobach and Trump are destroying the voter files they received from a couple of states. SFW. The real information is, what is the commission’s agenda? Did they find fraudulent voters? I’m certain they are covering up the fact that they DIDN’T find fraudulent voters. Kobach also bought lists of Hispanic voters. The purpose is clear: match any Jose Garcia on voter rolls with Jose’ Garcia on deportation orders and purge an American for the crime of having a common Hispanic name.
Karlin: What do you think the future holds for the notorious Kansas Secretary of State Kris Kobach, co-chair of the commission and creator of all sorts of regulations to stop illegal voting that never occurs in the first place?
Palast: Here’s my prediction:

I’m not kidding. I picked Trump as President before the primary’s end, right? 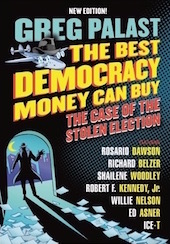 Just released: the new #TrumpStoleIt edition of the The Best Democracy Money Can Buy with Palast’s on-the-ground investigation of how Trump’s cronies shoplifted Michigan and other swing states. Plus updates on the billionaires behind the theft.
The new #TrumpStoleIt edition of our film also has extra investigative reports, including the theft of Georgia’s 6th CD special election.
The new film is available to buy or stream on Amazon and is FREE on Prime!
Or get a copy signed to you by Greg Palast, plus a free download link, with a tax deductible donation of $50 to our foundation to keep our team on the trail of Agent Orange and his enablers.

Karlin: How does Operation Crosscheck represent the Republican effort to massively suppress the vote under the false premise of preventing voter fraud?
Palast: Interstate Crosscheck is the GOP’s latest Jim Crow tactic to remove voters of color from the rolls. It’s absurdly simple. Kobach convinced 27 Republican voting chiefs (and two dumber-than-dirt Democrats) to share their voter rolls to hunt for suspected “potential duplicate” voters or duplicate registered voters. The voters get a postcard that looks like junk mail. If they don’t return it, they are either immediately scrubbed from voter rolls or put on the “inactive” voter list (where they are scrubbed if they miss a federal election).
Here’s why it’s evil: GOP officials only match first and last name. As one shocked expert says in my film: “If you’re name is Jose’Garcia, you’re suspected of voting in 29 states!” (ie. All the states where Crosscheck operates.) The list is overwhelmingly biased against voters of color (because 85 of the 100 most common names in America are minority names like Rodriguez and Washington).
Here’s an example of their list (it’s confidential, but I got it) matching voters named Jackson. It’s a frame from the film. Note that NOT one of the middle names matches: 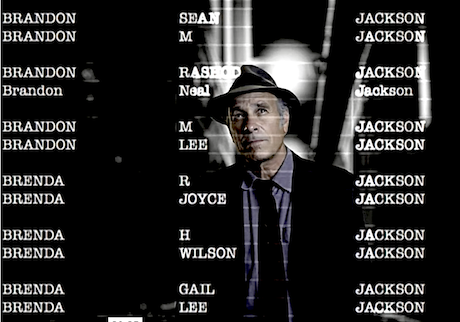 As I explained in Rolling Stone and in my movie this cost 1.l million voters their registration in 2016 and cost Hillary the election in swing states.
I confirmed this in Michigan with the bone-head Secretary of State’s PR man. You’ll love the scene in the updated film everyone laughs while you feel sick to your stomach.
Karlin: You explain your first exposure to purge caging lists was with the 2000 Florida vote. Explain what happened and how the 2000 race set the tone for what became Operation Crosscheck.
Palast: GOP dogs don’t need new tricks. Katherine Harris removed 94,000 voters, mostly Black men, from the rolls for the Bush-Gore election. She said they were felons, but I investigated for The Guardian. NOT ONE was an illegal voter.
It was just like Crosscheck. They “matched” the name of a felon with a voter. For example, Willie Steen of Florida, a Gulf War veteran, lost his vote because a guy named Willie O’Steen was convicted in Ohio.
It’s explained in the film with a 3-minute cartoon by Keith Tucker (who drew Who Framed Roger Rabbit). Here’s Harris kicking the 94,000 voters off the rolls: 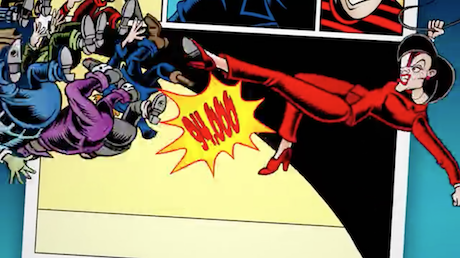 Karlin: Why do you think the mass corporate media makes a bigger deal out of whether the Russians hacked our vote than the many ways in which the Republicans are suppressing the vote in the United States?
Palast: Because the LA/NYC media is filled with white Democrats who can’t accept that the election was determined by racial vote suppression. Hillary said that America has the greatest electoral system in the world which means she’s only been to Kazakhstan. So, the Dems and their media make up the fairy tale about Russians using the language that would make Joe McCarthy proud. If Edward R. Murrow was alive today, he’d barf on them.
* * * * *
Greg Palast has written four New York Times bestsellers, including Armed Madhouse, Billionaires & Ballot Bandits, and The Best Democracy Money Can Buy, now a major non-fiction movie, available on Amazon and can be streamed for FREE by Prime members!
Stay informed, get the signed DVD of the updated, post-election edition of The Best Democracy Money Can Buy: The Case of The Stolen Election, a signed copy of the companion book or better still, get the Book & DVD combo.
Support The Palast Investigative Fund  and keep our work alive!  Become a monthly contributor and automatically receive Palast’s new films and books when they’re released!
Or support us by shopping with Amazon Smile. AmazonSmile will donate 0.5% of your purchases to the Sustainable Markets Foundation for the benefit of The Palast Investigative Fund and you get a tax-deduction! More info .
Subscribe to Palast’s Newsletter or his separate list for Poems & Stories.
Follow Palast on Facebook, Instagram, and Twitter.
GregPalast.com