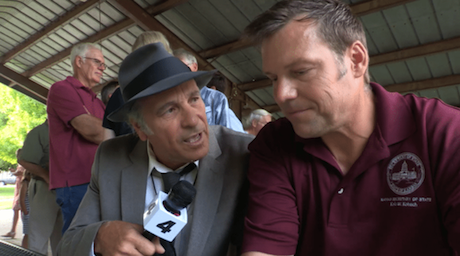 The man that well-coiffed racist, Richard Spencer, calls a “draconian illegal immigration enforcer” is now running for Governor of Kansas.
That enforcer made his announcement just hours after the euthanasia of Governor Brownback’s “Kansas Experiment” by the state legislature. Secretary of State, Kris Kobach, stepping over the corpse of Brownback’s political career, took to the stage and announced that he would be starting his campaign for Kansas’ highest office.

The Kansas Experiment, as coined by many, was a failed low-to-no business tax trickle down economics test that didn’t just not work, it nearly took the state's economy with it. Brownback, who got advice from the same right wing economists as Trump, in 2015 had “$44.5 million cut from public education” according to Vox.com.
Kansas is, of course home to three things: yellow brick roads, the Koch Brothers and voter suppression laws. Here's a reminder of who Kris Kobach – a.k.a. “The Wizard of Crosscheck” – is:

See full story on Nation of Change.
For more on Kobach and his racially-biased-by-design Crosscheck vote-purging op, which helped Trump steal the White House in 2016, watch The Best Democracy Money Can Buy. You can get the signed DVD, a signed copy of the companion book – or, better still, get the DVD and book combo by making a tax-deductible donation to the Palast Investigative Fund.
Or support the The Palast Investigative Fund (a project of The Sustainable Markets Foundation) by shopping with Amazon Smile. AmazonSmile will donate 0.5% of your purchases to the Palast Fund and you get a tax-deduction! More info.
Subscribe to Palast's Newsletter.
Follow Palast on Facebook and Twitter.
GregPalast.com