Clip from Palast’s film The Best Democracy Money Can Buy
On Tuesday, the trial of the lawsuit by the League of Women Voters against Kobach, Kansas’ Republican Secretary of State, began in a Kansas City courtroom. The League has sued to block the state’s law, drafted by Kobach, requiring all new voters to show proof of citizenship.
Kobach’s law has blocked an astonishing 1 in 7 new registrants from voting in the state because they did not satisfy his citizenship paperwork requirement.
The ACLU, which represents the League, has sent in its top litigators, led by its voting rights director Dale Ho, because of the nationwide implications of the case. If Kobach’s law is upheld and spreads to other GOP controlled states, just over one million Americans could lose their right to vote by 2020. 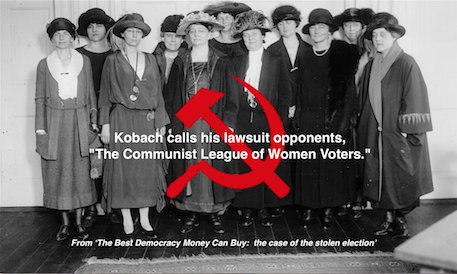 Oddly, Kobach has chosen a lawyer with little courtroom experience – himself.
Judge Julie Robinson was not amused by what many see as a publicity stunt. Robinson, the chief justice of the federal district for Kansas, excoriated Kobach for not knowing “Evidence 101,” and curtly coached Kobach’s amateur team on the correct procedure for cross-examination.
Buffoonish antics in the courtroom drew some laughter. But the partisan result of Kobach’s law is deadly serious. According to the ACLU’s expert witness, University of Florida professor Michael McDonald, nearly half (44.6%) of the voters blocked are young, 18 to 29 years old.
It cannot be lost on Kobach, former Chairman of the Kansas GOP, that young Americans voted overwhelmingly Democratic, 55% for Clinton and only 36% for Trump in 2016.
To justify the paper proof-of-citizenship requirement, Kobach told the court the requirement has blocked 30,000 non-citizens from voting in Kansas. However, he has been unable to prove that even a single one of the 35,314 voters blocked by the law is an alien.
Kobach’s Alien Voter Hunt
Just after the 2016 election, Secretary Kobach called me to confirm he was the source of Donald Trump’s claim that a million aliens voted in the 2016 election. (Kobach also confirmed it was his idea to force Mexico to pay for Trump’s border wall.)
Noting to Kobach that he is the nation’s only Secretary of State with the power to prosecute illegal voters, I asked if he planned mass arrests of alien voters. (Kobach had claimed on Fox News, for example, that “50 Somalians are stealing my vote!”)
Kobach told me, “Just wait! Convictions are coming.”
I’ve waited. But so far, his manhunt, begun five years ago, has produced just a single conviction of a non-citizen voter out of 1.8 million Kansas registrants. Nevertheless, tens of thousands of Kansans are blocked because they cannot produce the evidence – an original birth certificate or passport or naturalization papers – his law requires.

I haven’t asked for nearly a year, but I must: We are running low on funds – just as we’re about to launch a mass litigation operation against Kobach with the help of the ACLU and others. For now, details need to remain confidential. Make it happen!
We’re about to do a 2nd print of our Film’s post-election edition.
Donate $100 and get your name in credits plus the signed DVD.  Or, just the signed DVD or the signed book companion for a $50 donation, better yet, get the Book & DVD Combo.  Believe our work makes a difference?  Donate $1,000 and you’ll be credited as a producer ($500 for Co-Producer).  Or make a donation of any size.
We can’t thank you enough for your years of support.  Just wait until you see what we can do next.  – Greg Palast

Call From the Prison Parking Lot?
Not surprisingly, lower-income voters are less likely to hold these documents – and less likely to vote Republican. Voters earning less than $50,000 per year voted 53% to 41% against Trump.
And no, neither a driver’s license nor a Social Security card proves citizenship. The alternative, obtaining a birth certificate, can be a costly paper chase, as plaintiff Donna Bucci testified. Bucci, who gets by on the limited income she earns working in a local prison cafeteria, told the court Tuesday that she could not pay both her rent and the $50-$60 total cost to obtain her birth certificate from Maryland.
Kobach cross-examined her, hoping to get Bucci to admit to simple laziness. Kobach asked her why she didn’t call during work hours to arrange a special hearing before a state agency. Bucci replied that no cell phones are allowed inside prisons. Kobach attacked, asking why she couldn’t have run to her car during a break and phoned from the parking lot.
But even if Bucci had reached officials and obtained a hearing date, it would cost her a day of work, assuming she would be allowed the day off, to attend the hearing.
Judge Robinson will have to determine whether this bureaucratic rigmarole constitutes an unfair obstacle to voting. The National Voter Registration Act permits states to require only the “minimum amount” of information from a voter.
Up to now, “minimum” has meant checking the box on a registration form by which you swear, under penalty of imprisonment, that you are a citizen, and signing your name, to complete the registration form.
Neither Kobach nor his spokeswoman has responded to our requests for comment.
The jury-less bench trial is expected to run through Friday.

* * * * *
The Palast investigations team has been on Kobach and his fraudulent vote hunting scam since 2013 – long before he became Donald Trump’s official vote fraud hunter. Here is a clip (see above) from our film, out this week on Amazon and FREE on Prime!
Before turning to journalism as an investigative reporter for The Guardian and BBC Television, Greg Palast was an investigator of fraud and racketeering for governments and labor unions worldwide.
Known as the reporter who exposed how Katherine Harris and Jeb Bush purged thousands of Black voters from Florida rolls to steal the 2000 election for George Bush, Palast has written four New York Timesbestsellers, including Armed Madhouse, Billionaires & Ballot Bandits, and The Best Democracy Money Can Buy, a major non-fiction movie.
The post-election update of the movie, subtitled The Case of the Stole Election, is now available on Amazon – and can be streamed for FREE by Prime members!
Stay informed, get the signed DVD of the updated, post-election edition of The Best Democracy Money Can Buy: The Case of The Stolen Election, a signed copy of the companion book – or better still, get the Book & DVD combo.
Visit the Palast Investigative Fund store or simply make a tax-deductible contribution to keep our work alive! Alternatively, become a monthly contributor and automatically receive Palast’s new films and books when they’re released!
Or support the The Palast Investigative Fund (a project of The Sustainable Markets Foundation) by shopping with Amazon Smile. If you use Smile, Amazon will donate 0.5% of your purchases to The Sustainable Markets Foundation for the benefit of the Palast Fund – and you get a tax-deduction! Click here for more info.
Subscribe to Palast’s Newsletter. Follow Palast on Facebook, Instagram, and Twitter.
GregPalast.com

HUH! OH WEIRD, ITS ALMOST LIKE THIS WAS DONE INTENTIONALLY TO SUPPRESS THE VOTE OF LARGE POPULATION CENTERS, VERY WEIRD https://twitter.com/greg_palast/status/1599079323490988033

I want to salute Major Gamaliel Turner. Because when his right to vote was challenged, he went to court. And, by doing that, by bringing the action, and by going public and by participating in our film, Vigilante, he saved thousands of votes. https://youtu.be/IXcNyO6Fo80

omg this queue is... wheew

It is so offensive in this day and age, the methods used to prevent citizens from their inherent right to vote. https://twitter.com/Greg_Palast/status/1599079323490988033