Trump and the 13 Losers behind him 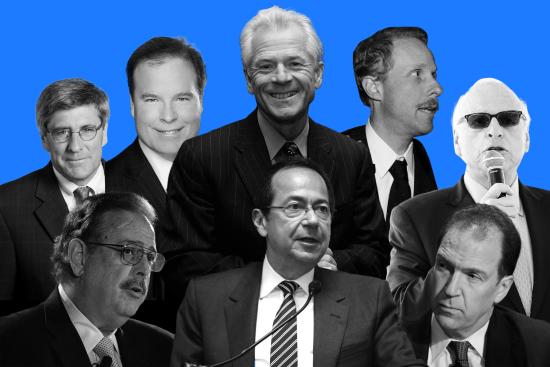 Donald Trump announced the formation of his Economic Advisory Council. Aside from a token academic that he’d never actually bothered to meet prior to the announcement, the all-male panel read like a rogues list ripped straight from the pages of Billionaires & Ballot Bandits by investigative reporter Greg Palast. Trump’s inner circle, which after an outcry over the glaring gender bias was supplemented by eight women, features some of the worst offenders when it comes to political powerbrokering for personal gain. But that’s just pay-to-play politics, and is therefore not so surprising. What did raise some eyebrows was Trump’s decision to embrace a group of guys he’d previously lambasted for “getting away with murder” due to their super-sized tax breaks: hedge fund managers, whom he’d also said half the time had “luck more than talent.” But The Donald can no longer afford to be picky, since the billionaire on “reality” TV only needs some actual real cash to fund his floundering campaign. In this week’s Best Democracy Money Can Buy: Election Crimes Bulletin, Flashpoints’ Dennis J. Bernstein gets the lowdown from Palast on Trump’s new hedge fund BFFs and the hidden payoff that’s facilitating their cosy relationship.

TRANSCRIPT (Originally broadcast on Aug 10, 2016)
Dennis J. Bernstein: Welcome back to the Elections Crimes Bulletin with bestselling author and noted BBC investigative reporter, Greg Palast, now reporting for Rolling Stone on these crazy elections as we try and figure out if your vote will count, or if it doesn’t really matter because the NRA might put a bullet behind Hillary’s ear – as per Donald Trump’s strong, strong suggestion. Greg, welcome!
Greg Palast: You don’t have much of a sense of humor, Dennis. Don’t you ever tell assassination jokes?
DB: Am I not subtle enough?
Palast: Well, you know, I figured that was a loaded question – bang!
DB: So Trump manages to keep the headlines, but maybe that’s better for him because if people really start delving behind the scenes, look into who supports him, what he’s been up to, this is where his real trouble is.
Palast: I’d like to think so. I’d like to think that instead of parsing his seventh grade sense of humor that we would be looking at the billionaires behind him. It’s fascinating because it was Donald Trump who told us, when billionaires like me write checks, we expect something back from the politicians, and a lot more than we put in. Now that he’s been exposed as not a billionaire – he just plays one on TV – he’s gone to the very guys that he’s attacked.

HUH! OH WEIRD, ITS ALMOST LIKE THIS WAS DONE INTENTIONALLY TO SUPPRESS THE VOTE OF LARGE POPULATION CENTERS, VERY WEIRD https://twitter.com/greg_palast/status/1599079323490988033

I want to salute Major Gamaliel Turner. Because when his right to vote was challenged, he went to court. And, by doing that, by bringing the action, and by going public and by participating in our film, Vigilante, he saved thousands of votes. https://youtu.be/IXcNyO6Fo80

omg this queue is... wheew

It is so offensive in this day and age, the methods used to prevent citizens from their inherent right to vote. https://twitter.com/Greg_Palast/status/1599079323490988033