Thomas Friedman’s Underpants
[New York] Von Eckardt, our chief investigator, joined me and Krugman in the green room. She’s a big fan of Paul’s and couldn’t wait to hear two of her favorite economics writers talk privately about the great issues of the day. 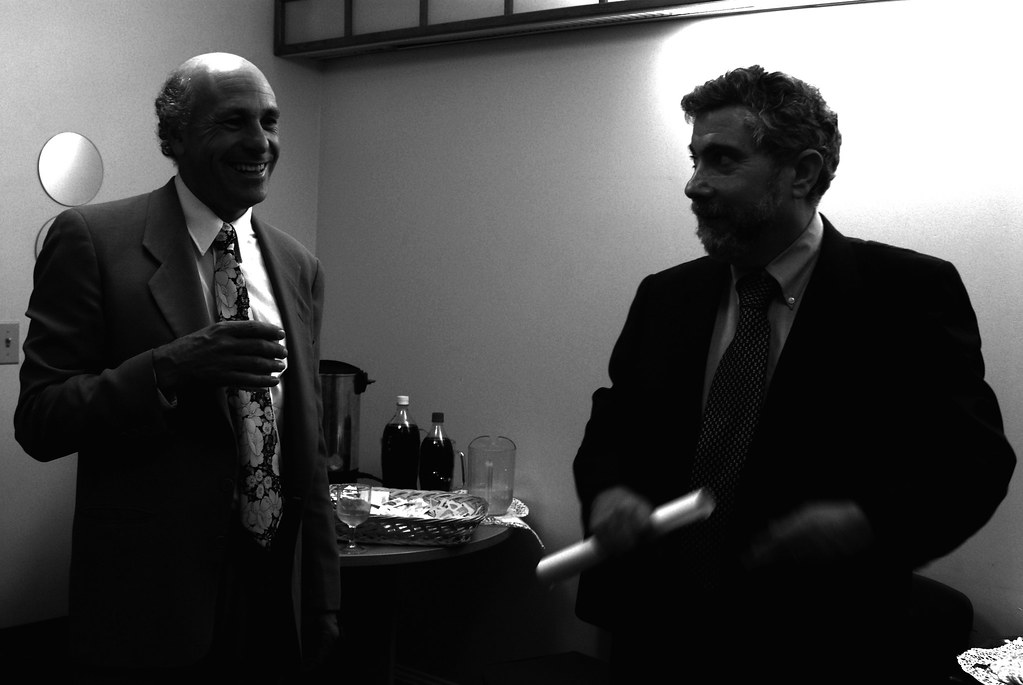 “I wring them out as absolutely tight as I can,” said Krugman, “and by the morning they’re just a little damp but you can still wear them.”
I had a different technique for stretching the supply of underwear on book tours: Wear them into the shower or, in a pinch, turn them inside out.
“There’s one guy that has a clean pair Fed-Ex’d to him every day and he puts the dirty ones in a return envelope.” The “guy,” of course, had to be Thomas Friedman.
Von Eckardt was fuming. “THAT’S WHAT YOU GUYS TALK ABOUT? YOUR UNDERPANTS?!”
Actually, I thought it was all quite informative.
Arnold’s Army
[San Diego] I feel so much safer. Arnold’s Army is on the way to the Mexican border. One thousand National Guardsmen of California, guys with names like Sanchez, Kowalski, Huang and Gutierrez, are being sent by a guy named Schwarzenegger to stop the invasion of immigrants. OK, I’m down with that — ever since the first Pilgrims immigrated to these shores, just about every new American has wanted to shut the Golden Door behind them.

But the bogus border patrol has nothing to do with stopping illegal immigration. After all, even as dim a flashlight as our president, who ordered the governor to send the Guard to battle stations, knows that a couple hundred more professional border patrolmen would do a better job than a thousand weekend warriors marching around the desert. And besides, if the Guard actually stopped the flow, there’d be riots in West Hollywood when restaurant patrons discover they’ll have to bus their own dishes.
According to George Bush, there’s more to this boundary buildup than stopping trans-border commuters. The president tells us the war on immigrants is just part of the War on Terror. Our borders, he tells us, are open and the bad guys can just wade right in. But if we’ve learned anything at all from the Sept. 11 attack, it’s that al Qaeda flies business class.
Make Them Steal It

[Chicago] Martin Luther King III mentioned to a group of civil rights leaders that I was in the room. King had my book. “I’m going to take Greg’s book and place it on my father’s grave. He will be pleased.”
It was, I admit, hard not to tear up at that moment. Then I thought, “Don’t do that! You’ll get the book dirty!” And I told Martin, “I have a better idea. Let’s march down to 1600 Pennsylvania Avenue and throw the book through the window.”
Jesse Jackson said, “We march, we win. Every time.” Maybe. But I know this. If we don’t march, we lose.
How many times am I asked, “Why vote if they’re going to steal the election?” That’s the point: Make them STEAL it. Make them know they can’t win UNLESS they steal it.
Shoplift This Book

[Berkeley] Cody’s is closing. Just about hippest bookstore in America. It’s in Berkeley on Telegraph Avenue. In another time, I was the sandwich-sign man who stood in front of the store, surrounded by poets and pot-smokers. Today, the poets are gone.
And so is Cody’s. It was famous for its author talks: Salmon Rushdie, Gregory Corso (you’re too young to know him), Mario Savio. Cody’s just hosted its last author chat (mine).
I was tear-gassed in front of Cody’s. It was after Nixon invaded Cambodia. Lots and lots of crazy-ass memories. But Berkeley isn’t “Berzerkley” anymore. The Berzerkers have gone into real estate, third wives, hair transplants. No place for Cody’s.

I shared the Good Old Times with the crowd. “I used to shoplift here,” I said. Andy the owner frowned. “I wish you wouldn’t say that.”
I dawdled, browsed the shelves. Picked up a copy of Bukowski’s “Confessions of a Man Insane Enough to Live with Beasts.”
My driver panicked about the time. Late for in-studio radio. With a crowd of fans near the front door registers, she insisted I slip out the back.
Back of the limo, shooting down Telegraph, I realized I had left without paying for the Bukowski. Damn. I should call Andy and tell him I owe Cody’s. I owe Cody’s a lot.
“Mr. Palast”
[San Francisco] Ginsberg told me, “I’m old — I cry every time I hear a friend’s name.” Last night was the 50th anniversary of the publication of Ginsberg’s “Howl” by City Lights Bookstore. It was about 11pm, but City Lights was still open so I cabbed over to catch the big crowd celebrating the event.

But the place was empty. I was the only customer in the rambling shop. I figured there was nothing else to do but pick up a copy of the small chapbook.
I brought the “Howl” up to the skinny kid at the register.
He waved away my money.
“Oh, we can’t possibly charge you for that, Mr. Palast.”
I walked out as quickly as possible, into the North Beach midnight, fighting tears, and feeling very old.
Never for Money
Why am I on this plane? What the hell am I doing? I’m down for 30 flights in 30 days. Atlanta, Dublin, Albany, London. LET ME OUT OF HERE. I turn up “Home,” the David Byrne’s song. He’s singing about the brutal aloneness of the road tour. What the hell for?
Byrne says, “Never for money. Always for love.”
OK, David. Where next?