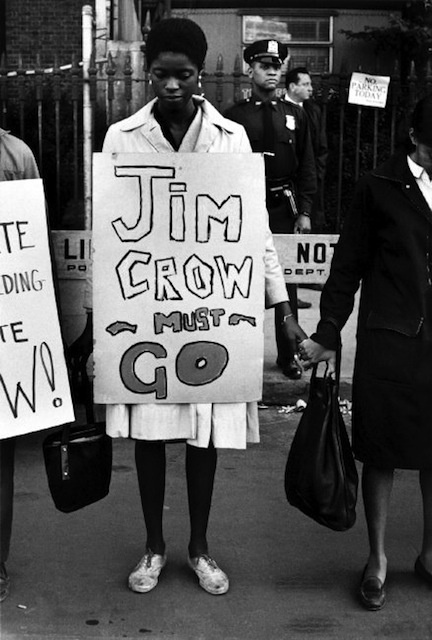 You know why black folk in the south don’t vote? According to The New York Times and the experts at the Pew Charitable Trust, they’re just too damn fat!

Normally I wouldn’t care what the Times is passing off as fact, except for that, on February the 27th, the US Supreme Court will hear arguments about whether to gut the Voting Rights Act of 1965.

The Voting Rights Act was the law that Martin Luther King Jr had a dream about a half-century ago: that all citizens will be able to exercise their right to vote. But, like all pleasant dreams, morning means waking up to the ugly reality sleeping next to you.

The pug-uglies in this case are the four Supreme Court justices hostile to the Act. If one more joins them, you can kiss Martin’s dream goodbye.

The dream-busters are led by Chief Justice John Roberts. In 2009, he wrote, “The historic accomplishments of the Voting Rights Act are undeniable.” But – and Roberts’ “but” is huge – the Act is out of date and “fails to account for current political conditions”.

According to Roberts, “Jim Crow laws” – the apartheid rules used in the Deep South to keep African-Americans from the polls – have long passed away.

So, Roberts is ready to dump the key enforcement provision of the Voting Rights Act – the “pre-clearance” requirement.

Sixteen states must “clear” any changes in voting procedures with the US Department of Justice. That’s to make sure there’s no racial monkey business – that new rules aren’t clever tactics meant to remove black, brown, Native American, Catholic, Mormon or other minority voters.

In the current case before the Court, some Rebel states are hollering that they were unfairly singled out for this special scrutiny.

However, it was arithmetic in the law, not the Civil War, that put Mississippi on the list. Before the Act, only seven percent of its black citizens were registered to vote, below the law’s 50 percent line.

In November, at least a few Americans got quite upset to see television coverage from Florida of long lines of black folk waiting four or five hours to vote for the President. So is Jim Crow really dead and gone in Dixie?

Why pick on Dixie? After all, despite the hours-long lines of Black voters in Florida we saw with our own eyes, Pew shows that there’s only a 23 minute wait to vote in Florida – less time than it takes to cast a vote in Indiana. Overall, Florida ranks near the best in Pew’s “Elections Performance Index”. Let’s give a medal to Florida’s former Secretary of State, Katherine Harris!

Pew was advised by Yale law professor Heather K Gerken, who explained the study for the New York Times.

“Poor Southern states perform well, and they perform badly. Rich New England states perform well and badly – mostly badly,” she said. In other words, Justice Roberts is right: “The evil that [Voting Rights Act Section 5] is meant to address may no longer be concentrated in the jurisdictions singled out for preclearance.”

In other words, why single out Florida and the 15 others?

But wait. Something’s missing: colour. Sure, the average Floridian waited 23 minutes to vote, but what about black voters?

In November, I joined African-American voters on “Souls to the Polls” day. Their wait for a ballot: four hours. Then I went up the road to an all-white polling station. Wait: zero minutes. There were unused rows of balloting machines, more poll workers than voters and a pot of coffee brewing for the pale suburban-Americans casting ballots.

And Oddly, despite a hot, hot Presidential contest with an African-American candidate, by mid-May 2012, the Census Bureau reported that the number of African-Americans registered declined by over one million. Hispanic names on voter rolls fell, too, despite massive registration drives. A big decline in voters of colour was reported in the South’s huge swing state, Florida.

So, overall voter turnout fell short. But the reason, according to the Pew expert featured in the Times, is that, “States in the Deep South with high obesity problems seem to be having a problem getting people to the polling place.”

Apparently, citizens of colour south of the Mason-Dixon line are just too fat to vote.

Maybe there’s another explanation for black and Hispanic names disappearing from the polls. Willie Steen, a Gulf War veteran, was removed from the voter rolls in 2000 because the Republican Secretary of State of Florida listed him as a felon. I met Steen. He’d never got so much as a parking ticket. He was, like tens of thousands of others, guilty of “VWB”; Voting While Black.

Secretary of State Katherine Harris sent Steen a note of apology for the “error”, but only after the election of George W Bush. Then, in 2004, Steen, who is quite slender, was purged again.

Steen’s name matched that of an Ohio felon named “O’Steen” on a database created by Republican hacks. The name-match game cost 58,000 innocent voters their registrations in just one year.

This was just one method of nine used to hold Florida’s black voting rate to 58 percent compared to 65 percent for whites.

In 2012, Florida’s new Republican Secretary of State Ken Detzner again set out to bleach the voter rolls whiter than white.

But wait: it’s a jail-time crime for a non-citizen to register or vote, so that’s one heck of a crime wave.

So how many illegal foreign voters were arrested in Florida? One: an Austrian-Canadian gun aficionado.

Yet, nearly one in ten Hispanic voters would have been barred from the polling booth. But, at the last moment, federal voting rights law stopped the Republican’s latest Jose Crow manoeuver.

But wait – if the Voting Rights Act required Florida to get federal approval for voter roll purges, how could Steen and other black men have been stripped of their rights?

Answer: Florida lied. The state used a loophole in the Voting Rights Act, claiming the purge was not a change in rules, just a clerical clean-up of the voting lists.

What’s the solution to the new trickery? Not, as Justice Roberts suggests, to eliminate Section 5, but to expand it.

Indeed, the reach of the Voting Rights Act was massively expanded by presidents Gerald Ford and Ronald Reagan. Reagan!

As a result of their changes, states designated officially racist include the Confederate states of California, Arizona, New York, New Mexico, South Dakota and Alaska. Alaska? You betcha!

And for good reason. Take California – under a Republican Secretary of State, Bruce McPherson, 42 percent of voter registration forms were rejected, an overwhelmingly amount of those Hispanic, Arab-American and Asian. Jim Crow, it seems, became a surfer dude.

In 2004, in McKinley County, New Mexico, only one in ten voters cast a ballot for President – at least, that’s what the machines said. In fact, the voting machines simply disappeared the vote – almost all cast by Navajo Natives. Unfortunately McKinley was, by that time, “bailed out” of the Voting Rights Act, which any state can do by proving it no longer discriminates. (Apparently there’s not much you have to prove.)

And those lines I filmed of black voters standing for hours and white voters waltzing in for a ballot without a wait? That was in Ohio, with arguably the most racially bent voting system in America. (When the black voters finally made it to the voting station, I discovered they’d been given “absentee” ballots, subject to challenge, rather than the regular ballots given to the white voters.)

The horror show in Ohio does not absolve the racist voting systems of Florida, it merely calls for another expansion of the pre-clearance list to reflect a new reality. Jim Crow voting games are more widespread and far more sophisticated today than in 2000 when I first uncovered the Florida black-out.

That’s because Jim Crow is now Dr James Crow, database analyst, a hired gun who knows it’s easier to win elections by blocking voters rather than winning their votes. Identifying and challenging “suspect” voters is far more effective in chasing away black than burning crosses.

In 2012, cyber-guru Karl Rove created a massive voter profiling system called Data Trust. Rove stated then that, for example, “Even a small drop in the share of black voters would wipe out [Obama’s] winning margin in North Carolina. If [black voters’] share of turnout drops just one point in North Carolina, Mr Obama’s winning margin there is wiped out two and a half times over.”

A little purge goes a long way. Add in a requirement of voter IDs with photos (which Indiana used to bar about 72,000 black voters this year), and voting games, not voters, will pick our government.

The solution is not for the Supreme Court to let Jim Crow ride again through the Southland, but another expansion of pre-clearance scrutiny to Ohio, Indiana and those states that need a little Reconstruction.

Palast is the author of the New York Times bestsellers Billionaires & Ballot Bandits: How to Steal an Election in 9 Easy Steps, The Best Democracy Money Can Buy, Armed Madhouse and the highly acclaimed Vultures’ Picnic, named Book of the Year 2012 on BBC Newsnight Review.

Visit the Palast Investigative Fund’s store or simply make a contribution to keep our work alive!