Tim Griffin: The Tears of a Clone
Conyers Closes in on Karl and his Rove-bots ...

He cried. Then he lied.

Griffin is the Rove-bot exposed by our BBC Newsnight investigations team as the man who gathered and sent out the infamous ‘caging’ lists to Republican state chairmen during the 2004 election. 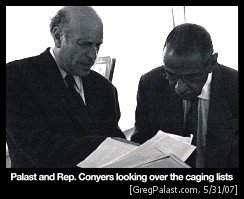 Caging lists, the BBC discovered, were used secretly as a basis to challenge the right to vote of thousands of citizens — including the homeless, students and soldiers sent overseas. The day after the BBC broadcast that, the Chairman of the Judiciary Committee, John Conyers, sought our evidence on Griffin, Tim resigned his post as US Attorney for Arkansas. That job was a little gift from Karl Rove who made room for his man Griffin by demanding the firing of US prosecutor Bud Cummins.

Last week, our cameras captured Griffin, all teary-eyed, in his humiliating kiss-off speech delivered in Little Rock at the University of Arkansas Bill Clinton School for Public Service where he moaned that, “public service isn’t worth it.”

True. In the old Jim Crow days in Arkansas, you could get yourself elected by blocking African-Americans. (The voters his caging game targeted are — quelle surprise! — disproportionately Black citizens.) 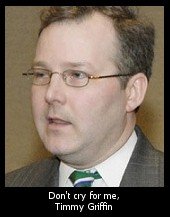 But today, Griffin can’t even get an unemployment check. When he resigned two weeks ago following our broadcast, the cover story was that the voter persecutor-turned-prosecutor had resigned to work for Presidential wannabe Fred Thompson. But when Thompson’s staff was asked by a reporter why they would hire the ‘cagin’ man,’ suddenly, the Law & Order star decided associating with Griffin might take the shine off Thompson’s badge, even if it is from the props department.

Griffin, instead of saying that public service “isn’t worth it,” should have said, “Crime doesn’t pay.” Because, according to experts such as law professor Robert F. Kennedy Jr., ‘caging,’ when used to target Black voters’ rights, is a go-to-prison crime.

By resigning, Tim may not avoid the hard questions about caging — or the hard time that might result. When I passed the first set of documents to Conyers (a real film noir moment, in a New York hotel room near midnight), the soft-spoken Congressman said that, resignation or not, “We aren’t done with Mr. Griffin yet…”

Back in Little Rock, when asked about caging, Rove’s guy linked a few fibs to a few whoppers to some malefactious mendacity. That is, he lied.

At the risk of making you cry again, Tim, may I point you to an email dated August 26, 2004. It says, “Subject: Re: Caging.” And it says, “From: Tim Griffin – Research/Communications” with the email tgriffin@rnchq.org. RNCHQ is the Republican National Committee Headquarters, is it not, Mr. Griffin? Now do you remember caging mail?

If that doesn’t ring a bell, please note that at the bottom is this: “ATTACHMENT: Caging-1.xls”. And that attachment was a list of voters.

In last week’s pathetic farewell, Mr. Griffin averred that the accusation he was involved in caging voters, “Goes back to one guy — whose name I won’t mention.” (FYI, Mr. Griffin: My mother calls me, “Gregory.”)

Yes, I first reported the story for BBC London — back in 2004 when, as Griffin correctly noted, it was ignored by my US press colleagues until, as Tim put it, “I became embroiled in the US Attorney thing.” By ‘the US Attorney thing,’ I assume you are referring to your involvement in firing and smearing honest prosecutors and grabbing one of their salaries for yourself.

You say, Mr. Griffin, that the unmentionable reporter, “Made [it] up out of whole cloth.” You flatter me, Mr. Griffin. We could not possibly be so creative at The Beeb as to construct the thousands of names of voters on your caging lists.

And by the way, we don’t have just one of your “caging” emails, but scores of them.

I want to take this opportunity to thank you for sending them to us — even if that was not your intent. You copied your caging missives to ‘bdoster@georgewbush.org.’ Mr. Doster was Chairman of the Florida Bush campaign — but that address was not his but John Wooden’s pretending to be the Bush campaigners. Wooden then sent your notes to me.

By the way, Mr. Griffin, if you want an explanation of ‘caging voters,’ just read an email dated February 5, 2007 by…Tim Griffin.

In that email, Griffin references the Bush campaign mailing out thousands of letters. The letters returned (‘caged’) as undeliverable were used as the GOP’s supposed evidence that these were “thousands of fraudulent voter registrations.” These voters were subject to challenge. However, these caging lists of “fraudulent” addresses, like the 2000 “felon” lists which in fact contained no felons, contained no fraudulent voters. But that wouldn’t necessarily save them from the massively successful Republican voter-challenge campaign.

During the appearance he made in Arkansas last week, Griffin said he’d never heard of ‘caging.’ “I had to look it up,” he said. Griffin discovered that “caging” is “a direct mail term.”

I don’t doubt Griffin’s ignorance. Griffin’s just a good ol’ boy, a former military lawyer, who wouldn’t know direct mail terminology from a hole in the ground. Until he went to work for the RNC.

So where did Tim get this direct mail term he used in his emails? Well, before Karl Rove signed on with George W. Bush, he owned Karl Rove & Co … a direct mail firm.

Rove made millions making up lists of voters, doing more ‘caging’ than a zoo-keeper.
Am I saying caging-expert Rove had something to do with the allegedly illegal caging games of his boy Griffin? Does a bear…?

Mr. Griffin wouldn’t answer the BBC’s requests for comment. So I suggested to an Arkansas local, Luther Lowe, a former army reservist and himself a victim of a challenge to his vote, that at the Little Rock send-off for Griffin, he ask the fallen US Attorney about Rove’s involvement in caging. Lowe did so, politely. Griffin wove, ducked, blathered and blubbered. But wouldn’t answer.

Maybe a subpoena would encourage a Griffin response. And a grant of immunity from the Conyers committee. That’s Rove’s nightmare. Because unless Griffin joins Alberto Gonzales in Club Amnesia, Griffin has a lot to tell us about Mr. Rove and targeting Black voters.

Will he? It’s not Conyers’ style to hunt down Rove. The congressman is not, despite what Republicans say, a partisan hit man. He is, however, one tenacious legislator who told me he would like his committee, “to follow where the evidence leads.”

But that’s not necessarily going to happen. Conyers told me he sees the evidence in the prosecutor firing investigation leading to the much bigger, nastier issue of voter suppression — in simpler terms, fixing elections.

Unfortunately, many on his committee from both parties see the hearings as limited to the single issue of the firing of prosecutors. They want to scrutinize the elephant’s trunk but refuse to acknowledge it’s attached to an elephant: election rigging. Racially poisoned, direct-mail driven, computer implemented election rigging.

But Conyers may get there yet, to the issue of elections manipulation. I didn’t get that from the Chairman (too circumspect to let his future intentions slip out). I got it from the Big Bubba. When I ran into Ol’ Silver Eyes himself at an Air America soirée, Bill Clinton (man, he’s gotten thin!) told me, “When we really get going on these prosecutor hearings, when we really dig deep, we’re going to get right to the issue of voter suppression.”

But what do you mean “we,” Bill? Conyers is dean of the Congressional Black Caucus, which has an abiding concern and painful experience with illegal vote suppression of all types: caging, purging, challenging, lynching. But whether Conyers can convince his committee, mostly members of the Congressional White Caucus, to “dig deep” on vote suppression, is an open question.

In the meantime, Conyers has convinced his committee to drop subpoenas on Harriett Miers (the lady tight with Griffin, Rove and, notably, George W. Bush) and Sara Taylor, Rove’s Gal Friday. Conyers, methodically, determinedly, is circling in on Rove, “Bush’s Brain,” a man known to surrender the corpses of his allies in place of his own (eh, Mr. Libby?). No wonder Griffin’s in tears.

So here’s a hanky, Mr. Griffin. This unnamable reporter would rather you save your tears for Randall Prausa. He ended up on one of your caging lists, what you term a suspected ‘fraudulent’ voter subject to GOP challenge because he was not home to get his fraudulent, ‘Welcome, voter,’ letter from the GOP.

Can you guess, Mr. Griffin, why Prausa wasn’t at home? Well, unlike Messrs. Rove and Bush, Prausa was serving his country overseas.

Listen to the podcast of this article here