SuicideGirls Steal Back Your Vote

Do you think your vote’s going to count this year? Think again. Unless you take action now, your vote may already be lost. Award-winning investigative journalist Greg Palast, who uncovered exactly how the election was “won” in 2000, teamed up with activist, attorney, broadcaster and writer Robert F. Kennedy, Jr. to find out if democracy was in a better state
eight years on. In their report, which was published this month in Rolling Stone, they concluded that the 2008 Election had already been stolen. They are now challenging you to steal it back.
“If Democrats are to win the 2008 election, they must not simply beat John McCain at the polls — they must beat him by a margin that exceeds the level of GOP vote tampering,” Palast and Kennedy summarized. But all is not lost — yet. To this end, the dynamic duo prepared an adult comic, Steal Back Your Vote, which outlines the six ways these thieves (who would call themselves “patriots”) are trying to deprive you of your vote, and empowers you with seven ways you can snatch it back. 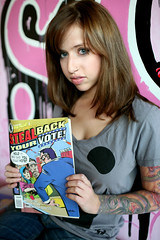 We checked in with Palast, a self-styled Sam Spade-like detective turned writer (he started out as a corporate investigator), to get the skinny on this 2008 election crime wave (and, no, the criminals aren’t members of ACORN).
Read the interview at SuicideGirls.com
See the rest of the (SFW) photos at our Flickr page