The Secret Lists that Swiped the Senate

Statistics guru Nate Silver simply can’t understand why every single legitimate poll indicated that Democrats should have gotten 4% more votes in the midterm elections than appeared in the final count.
The answer, Nate, is “Crosscheck.” 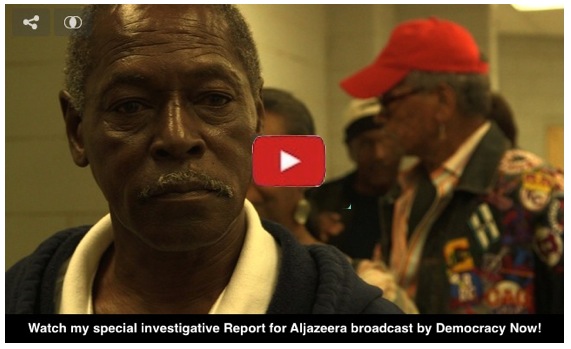 No question, Republicans trounced Democrats in the Midterm elections.  But, if not for the boost of this voter-roll purge system used in 23 Republican-controlled states, the GOP could not have taken the US Senate.
It took the Palast investigations team six months to get our hands on the raw files, fighting against every official trick to keep them hidden.
Here’s what we found.
Interstate Crosscheck is computer system that officials claim can identify anyone who commits the crime of voting twice in the same election in two different states.  While the current list of seven million “suspects” did not yield a single conviction for double voting, Crosscheck did provide the grounds for removing the registrations of tens of thousands of voters in battleground states.
The purge proved decisive in North Carolina, Colorado, Kansas and elsewhere.  Without Crosscheck, the GOP could not have taken control of the US Senate.  [Read my original investigative report.]
Nate Silver might want to punch these numbers into his laptop:

The Crosscheck purge list also swamped GOP Senate margins in Alaska and Georgia and likely provided the victory margins for GOP gubernatorial victories in Kansas and Massachusetts.
No, states do not purge every name on the lists.  Typical is Virginia which proudly purged 64,581 “duplicates” from its voter rolls in 2013, equal to about 19% of its Crosscheck list.  Other states refuse to provide numbers, but their scrub methods are the same, or even more aggressive, than Virginia’s.
We can conservatively calculate that the purge of 19% of the Crosscheck lists accounted for at least three GOP Senate victories – and thereby, control of the Senate.

If the Crosscheck lists truly identified fraudulent double voters, then we’d have to concede that the election results are legit.  But the ugly truth is, the lists are nothing more than racially-loaded lists of common names. 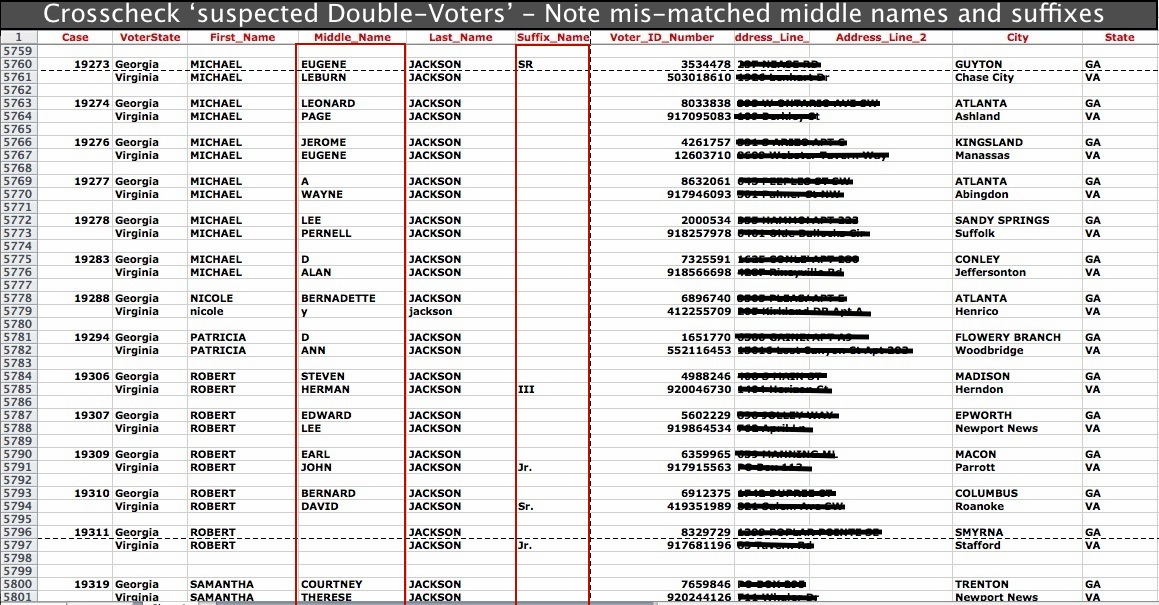 And that’s why GOP Secretaries of State, a gaggle of Katherine Harrises, hid the lists until we cracked through the official wall of denial and concealment. These election chieftains refused our demands for the lists on the grounds that these millions of voters are all suspects in a criminal investigation and so must remain confidential.
Eventually (and legally), we were able to get our hands on 2.1 million of the 6.9 million names””and had them analyzed by the same list experts who advise eBay and American Express.
What we found is simply a giant list of common names – a lot of voters named Michael Jackson, David Lee and Juan Rodriguez.  The racial smell of it was apparent and awful.  As the US Census tells us, African-Americans, Asian-Americans and Hispanics are 67% more likely to share a common name as a white American.  In other words, the lists heavily targeted “blue” Americans, Democratic leaning voters.
While state officials claimed that the criminal double voters were matched by social security number and other key identifiers, we discovered that, in fact, they only matched first and last name.  Nearly two million of the pairs of names lacked middle name matches.  Example:  James Elmer Barnes Jr. who voted in Georgia is supposed to be the same person as James Cross Barnes III of Virginia.
Republican officials have gone to great lengths to cover Crosscheck’s operations.  Voters purged are not told they are accused of voting twice.  The procedure, created by Kansas’ Republican Secretary of State Kris Kobach, is to send a postcard to each “duplicate” voter requiring them to re-verify their registration.  A large percentage are never delivered – Americans, especially renters and lower-income Americans, move often – or cards are tossed away confused for junk mail.
Brad Friedman, the investigative reporter with encyclopedic knowledge of elections shenanigans, was also bemused by Nate Silver’s confusion over the missing Democratic four percent.  He cites the Crosscheck purges we discovered and adds in all the other tried and true methods of bending the vote, from Photo ID restrictions to missing voter registrations and a deliberate shortage of paper ballots in minority precincts.  In Georgia alone, 56,000 registration forms collected by a coalition of minority voting rights groups were simply not added to the voter rolls.

The Tool to Take 2016
The purge of those snared in the Crosscheck dragnet has only just begun. The process of actually removing names from the voter rolls is subtle and slow, involving several steps over many months.  Some states mark their voters on the Crosscheck list as “inactive” – which means that, if they failed to vote in this midterm election, they will be blocked from voting in 2016.  As a result, Crosscheck will take an even bigger bite out of the 2016 voter rolls.
This bodes ill for the upcoming Presidential contest when, once again, Ohio is expected to be decisive. Ohio’s Republican secretary of state, John Husted, has embraced Crosscheck.
We enlisted Columbus State University professor Robert Fitrakis, an expert in voting law to canvas county voting officials.  He found these local elections officials concerned that the Republican Secretary of State is pushing counties to scrub voter rolls of “duplicates” within 30 days of receiving the names from the Secretary’s office.  This gives counties little time and no resources to verify if an accused voter has, in fact, voted in a second state.
Secretary of State Husted has refused to give us the list of the 469,201 names on Ohio’s Crosscheck list – but we’ve obtained thousands anyway.  We found that Ohio’s lists have the same glaring mismatches as we saw in the Virginia, North Carolina and Georgia lists.
We have now launched an investigation to uncover the names of all the voters Ohio plans to scrub from the registration rolls by 2016.  The answer may well determine who will choose our next president: the voters or Crosscheck.

Please support our continuing investigation into Crosscheck and other election trickery. Make a tax-deductible donation of at least $40 and receive a signed copy of Vultures and Vote Rustlers Palast’s compendium of investigative reports. Or for $50 minimum donation, get a signed copy of Billionaires & Ballot Bandits.
Or become a credited Producer ($1,000 min.) or Co-Producer ($500 min.) on our upcoming film based on the book Billionaires & Ballot Bandits. Watch the trailer.
You can of course support our work for any amount you can afford, no matter how small or large. we appreciate it all.
* * * * * *
For 15 years, Greg Palast has been uncovering voter suppression tactics in investigative reports for BBC Television, The Guardian, Harper’s and Rolling Stone.
Greg Palast is the author of several New York Times bestsellers including The Best Democracy Money Can Buy and Billionaires & Ballot Bandits.
Get a signed copy of Palast’s latest film Vultures and Vote Rustlers.
Make a tax-deductible donation and support our ongoing investigation into voter suppression.
Subscribe to Palast’s Newsletter and podcasts.
Follow Palast on Facebook and Twitter.
www.GregPalast.com