When the only way you can win is by depriving people of their vote, long lines are a feature, not a bug of GOP election strategy.

It’s no coincidence that the worst lines tend to be in young, poor and minority neighborhoods — in others words places where people tend to vote blue.

Long lines in Black precincts have been crucial to GOP election wins since Bush’s victory in 2004 and will be essential for a Trump victory in November. Which is why the GOP are making them even longer by slashing early voting, cutting voting hours, reducing the number of machines and workers, and closing polling stations.

For example, for the forced election in Wisconsin in March the number of voting stations in the African American majority city of Milwaukee was reduced from 180 to just five — resulting in killer Jim Corona lines. In Wisconsin voters were willing to brave the lines and the steal was overwhelmed. However, if we don’t reform our election system before November, that result could be merely the exception that proves the rule.

Voters wait to vote in the June 9 Georgia primary. Would you wait in this line?

Lines: A Long Time in the Making

After Barack Obama in his 2013 State of the Union complained that 102-year-old Desiline Victor waited six hours to vote in Florida, the Pew Trust dissented. Pew reported that Florida lines were shorter on average than in other states, only 23 minutes.

But the problem isn’t the average wait, it’s the Black wait. As I filmed in Ohio, the “average” wait was two and a half hours—five hours for African-American early voters, zero minutes for white suburban Election Day voters. (Ohio Secretary of State, Jon Husted worked hard to make lines longer, cutting early voting hours — only a Court order stopped him from shutting down Souls to the Polls Day altogether!) 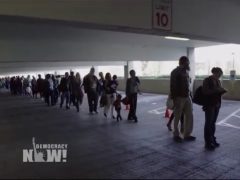 The Pew op-ed had an invidious effect: written in defense of the impending defenestration of the Voting Rights Act by the Supreme Court, relieving the Old Confederacy of the legal requirement to have the feds review any voting access changes that cause long lines, like closing polling stations.

The Supreme Court 5-4 ruled that official Jim Crow has been “eradicated.” So how to explain the huge drop in Hispanic and minority turn-out in the South in 2012?

Easy: obesity. According to a column by Prof. Heather Gerken, who created the index for Pew Trust praising Florida’s short lines, States in the Deep South with high obesity problems seem to be having a problem getting people to the polling place.

Got that? Deep South Black and Latinx voters are too fat to vote!

Maybe the wealthy Pew Trust can offer gym memberships to voters of color in Alabama.

In the alternative, designing polling locations to create long lines for voters of color should be considered a violation of the Voting Rights Act. But that requires Congress to restore and expand the Voting Rights Act. Specifically, extend the requirement to pre-clear changes in voting and registration systems in every state, not just in the Old South.

Since 2013, Georgia has been the testing ground for GOP Jim Crow tactics. That’s why I’ve been investigating Brian Kemp for six years and why my book, How Trump stole 2020 opens in Georgia.

Left out of the Blindwitness News reports on the recent Georgia primary: One reason for long lines was the massive number of black voters who never got their mail-in ballots. Many of those were on the purge list we uncovered through our successful court action against Kemp.

If you get one thing out of my book, How Trump Stole 2020, it’s that most vote theft happens before the voting, by preventing people from voting: the purge of voter rolls, the obstacle course of ID rejections, the shunting to uncountable “provisional” ballots — and the lines longer than for a Kendrick Lamar concert.