The Koch Brothers, Hugo Chavez
And The XL Pipeline 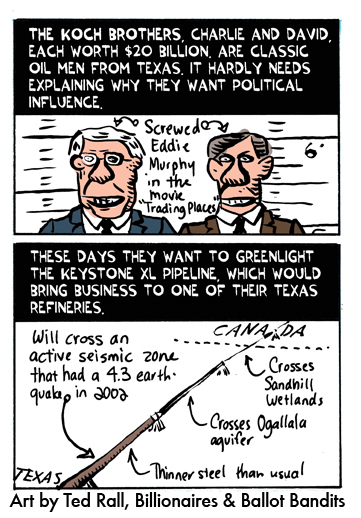 I’ve been tracking a tube of black putrid ooze, a toxic viper slowly slithering 2000 miles across the belly of America, swallowing all water aquifers, politicians and reason in its path.
The XL Keystone Pipeline.
As Nagini, the murderous snake in the Harry Potter tales, had its master Voldemort, I figured the Keystone XL Pipeline must also have its own dark lords.
I smelled Koch.
David and Charles Koch are each worth $20 billion–and they’re quite certain that’s not enough.  And so they need the XL Keystone Pipeline.
The XL Keystone will take Canadian tar-sands oil, the filthiest crude on the planet and suck it down to Texas Gulf Coast refineries. Alberta’s oil-glop reserve, if it can get to the US market, will warm the planet by nearly .4°C all by itself.
Why in the world would America pistol-whip Mother Nature to bring oil to Texas? I mean, it’s just plain weird to suck heavy tar oil out of Canada, drag it across the entire middle of the USA to import it into the oil-exporting Lone Star State.
Here’s where a little lesson in oil chemistry comes in.  You can’t just throw any old crude oil into an oil refinery.  These giant filth factories are actually quite sensitive.  The refineries of the Texas Gulf Coast are optimized for heavy crude.
It would cost billions of dollars to rebuild the giant Flint Hills Corpus Christi Refinery, owned by Koch Industries, to use the less-polluting Texas oil drilled nearby.
The Kochs need heavy crude. But the Brothers Koch have a problem.  Heavy crude is controlled by a heavy dude – President Hugo Chavez of Venezuela.
In case you haven’t heard, the US Department of Energy now says Venezuela, not Saudi Arabia, has the world’s largest petroleum reserve–including the overwhelming majority of the planet’s heavy crude.
And Chavez is not giving it away.  “We are no longer an oil colony, Mr. Palast,” Chavez told me in one of our meet-ups in Caracas.
He wasn’t kidding.  Venezuela’s export price now averages around $100 a barrel.

Read the full article at Vice Magazine. This week, readers may download, without charge, The Assassination of Hugo Chavez, the film based on Greg Palast’s investigations for BBC Television, The Guardian and Harper’s.

So the Kochs have turned their gaze upward–to Canada, where Alberta oil men are selling their tar-sands gunk for a whopping $33 a barrel less than Chavez Heavy.  Do the math:  With 289,000 barrels a day refined at Corpus Christi, switching to Canadian Tar from Venezuela Heavy could put $3 billion a year extra into the pockets of the Kochs. 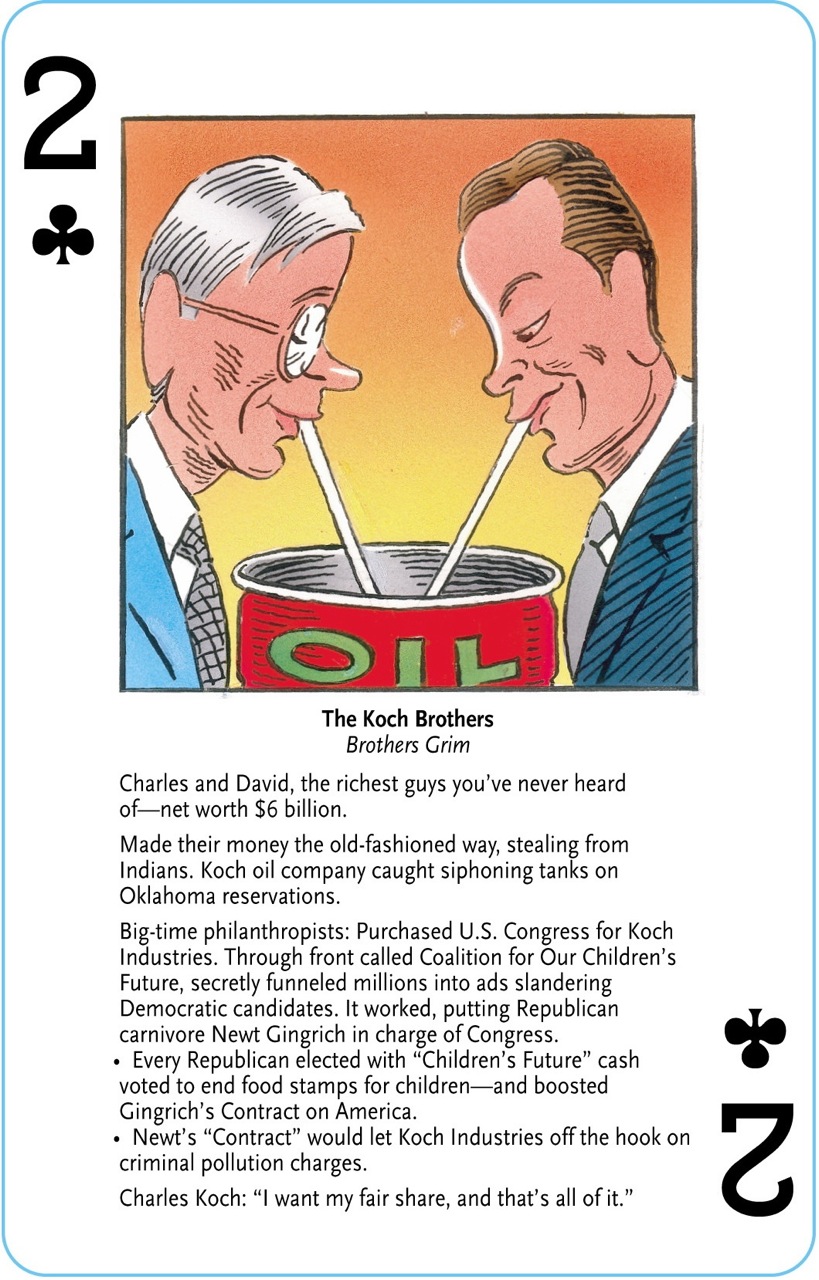 Koch Brothers, sample card from Palast’s 2004 Tarot-size playing cards. (Yes, the Kochs really were worth only $6 billion then).

However, there’s a problem.  Between Canada and Houston is the United States.  At the moment, there’s no pipeline that can take all that cheap crude south.  The southbound pipeline network now chokes at Cushing, Oklahoma, which is already blocked with 47 million barrels of crude sitting in storage tanks with nowhere to go.
The XL Pipeline would act as an oil enema, releasing the impacted inventory, enriching the Gulf refineries.
Cheap crude oil will then flow south, but as Canadian economist Robyn Allan writes, “It’s the refining sector that sees the benefit of lower priced WCS [West Canadian Sands oil] in the form of windfall profits from low feedstock costs.”
The gusher of cheap crude from a new pipeline will enrich the refiners, none more so than refiners named Koch.
So all the Kochs have to do is get the US government to agree to pop a pipe through Cushing to Houston-the Keystone XL.  But that would require that the US government go stark raving mad, commit environmental suicide, reverse all policy to slow global warming — all to bring in foreign oil while the US itself is suffering from a major oil and gas glut.
How will the Kochs pull that off?  Easy. They only need a diplomatic war with Venezuela, and their “Themis” machine, a unique tool which can drill deep into huge reserves of heavily-oiled politicians.
– Read the full article at Vice.com.
More on that next week…

All major environmental groups will hold the Forward on Climate Rally against the XL Pipeline in Washington, DC on February 17.
*  *  *  *  *  *  *
Get the real skinny on the Brothers Koch in “Petroleum Porn: the XXXL Pipeline,” in the New York Times bestseller, Billionaires & Ballot Bandits: Greg Palast investigates Karl Rove, the Koch Gang and their Buck Buddies.
Palast is also the author of the New York Times bestseller The Best Democracy Money Can Buy, Armed Madhouse and the highly acclaimed Vultures’ Picnic, named Book of the Year 2012 on BBC Newsnight Review.
Visit the Palast Investigative Fund’s store or simply make a contribution to keep our work alive!
MEDIA REQUESTS: For interviews contact us.
Subscribe to Palast’s Newsletter and podcasts.
Follow Palast on Facebook and Twitter.
www.GregPalast.com