Three weeks ago, we blew the lid off “Interstate Crosscheck” – the 6.9 million voter purge list put together by 27 wannabe Katherine Harrises.

It took us six months of detective work to get our hands on these lists of millions of Americans tagged as ‘suspected double-voters’ – and the sneaky and sick method used to disenfranchise more voters of color.

But the Purge’n Generals are not done.  So far, they’ve only knocked off a few hundred thousand voters.  That was enough to flip the Senate; but they’re in the process of removing nearly a million voters by 2016 to get the White House.

We’re not done either:  We are still digging, still uncovering more games like Crosscheck – and the billionaires behind the vote swindles.
We need your support to continue the investigation of these ballot bandits – and expose all their tricks. 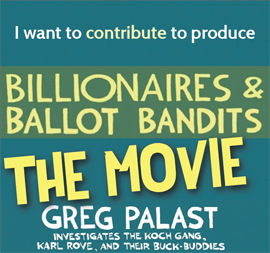 We are halfway through our production of Billionaires & Ballot Bandits – The Movie, based on my New York Times bestseller.
Let me be blunt:  We’ve depleted our funds – but we can’t stop now.
I rarely ask – but I have to ask now…
Help us complete the film by making a tax-deductible donation of $100 or more and you will get an on-screen credit as a Supporter plus the signed DVD once the film has wrapped.
Or make a tax-deductible donation of $50 — and, once the film has wrapped, you will receive the signed DVD.

Or chip in whatever you can to help us get it done.
For those with deeper pockets, we really need Producers.
For a tax-deductible donation of $1,000 or more you will get an on-screen Producer credit, or a Co-Producer credit for a donation of $500. (You can, of course, choose to remain anonymous.)
Or, for a donation or $40 get a signed DVD of my investigations compendium Vultures and Vote Rustlers (Palast Investigates Vol. 2).
Better yet, get the signed DVD combo of Palast Investigates Vol. 1 & 2 for a donation of $65.
Or donate $50 and get a signed copy of my New York Times bestseller Billionaires & Ballot Bandits.
You can also visit our store and check out our Gift Packs, Books, DVDs and Downloads – or simply support our work by making a no-gift donation for whatever amount you can spare.
Our Crosscheck expose got big applause and re-telling in the New York Times, LA Times – indeed, media all over the planet.
Esquire wrote: “Palast has been on the voter-caging story ever since people like Pastor Whiting got screwed 14 years ago. And, this week, writing for the Al Jazeera America news site, Palast dropped a bomb into [the Mid-Term] elections that has left credibility shrapnel all over the democratic process, if anyone cares to look for it.”
Thank you.  But that don’t pay the bills.  “Greg Palast” is not a person but a team of investigators and journalists including the Academy Award nominee Richard Rowley, gonzo photojournalist Zach D. Roberts and the extraordinary Ms. Badpenny and others.  They all need food, shelter and memory chips.
[If you haven’t seen the Crosscheck report, watch the Democracy Now replay; and read it here.]
Will you support our efforts?  Yes, our TV and print outlets cover some costs.  And we are grateful for crucial support from Puffin and Cloud Mountain foundations.  But we are, ultimately, citizen funded:  without your help there is just no way we can do the unique, deep detective work that makes our reports like no one else’s.
And it’s not just ballot trickery that we expose.  We have the investigative skills to crawl into the file drawers of the rich and shameless:  the billionaires who fund the ballot-bending shenanigans.  (Wait until you hear my Koch Brothers tape.)
Whether it’s exposing disenfranchisement games, the vulture financiers or petroleum porkers behind the poisoning of the body politic, no other news team has produced so many investigative bombshells year after year.
We’re ready to keep digging:  please hand us the shovels by donating right now.
And, on behalf of a tired, hungry crew, our true thanks for your years of support.
Yours, with gratitude,

* * * * * *
For 15 years, Greg Palast has been uncovering voter suppression tactics in investigative reports for BBC Television, The Guardian, Harper’s and Rolling Stone.
Greg Palast is the author of several New York Times bestsellers including The Best Democracy Money Can Buy and Billionaires & Ballot Bandits.
Get a signed copy of Palast’s latest film Vultures and Vote Rustlers.
Make a tax-deductible donation and support our ongoing investigation into voter suppression.
Subscribe to Palast’s Newsletter and podcasts.
Follow Palast on Facebook and Twitter.
www.GregPalast.com