The Goods on Goodling and the Keys to the Kingdom

Special to the BRADBLOG
May 24, 2007
This Monica revealed something hotter — much hotter — than a stained blue dress. In her opening testimony yesterday before the House Judiciary Committee, Monica Goodling, the blonde-ling underling to Attorney General Alberto Gonzales and Department of Justice Liaison to the White House, dropped The Big One….And the Committee members didn’t even know it. 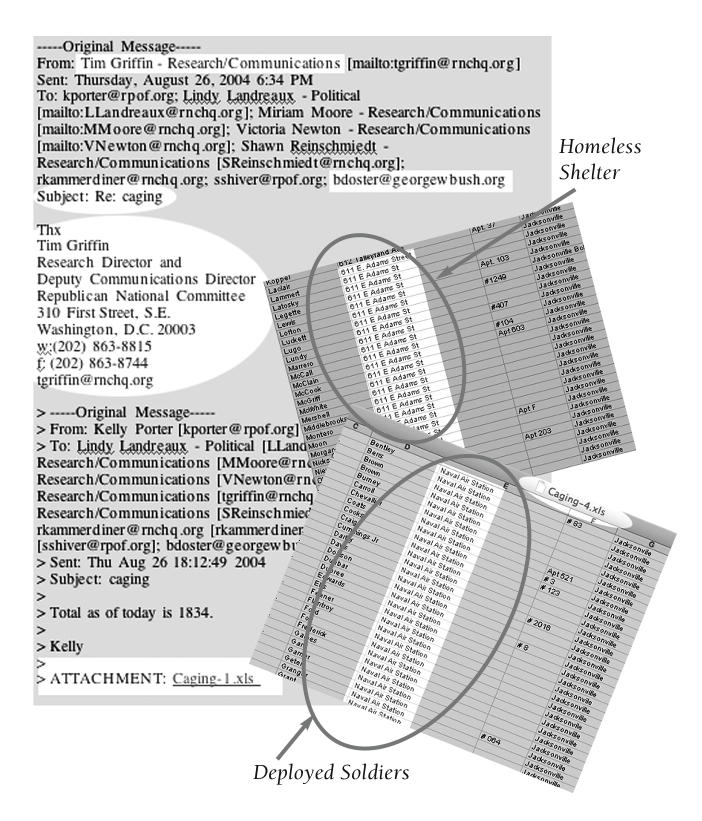 Goodling testified that Gonzales’ Deputy AG, Paul McNulty, perjured himself, lying to the committee in earlier testimony. The lie: McNulty denied Monica had told him about Tim Griffin’s “involvement in ‘caging’ voters” in 2004.
Huh?? Tim Griffin? “Caging”???
The perplexed committee members hadn’t a clue — and asked no substantive questions about it thereafter. Karl Rove is still smiling. If the members had gotten the clue, and asked the right questions, they would have found “the keys to the kingdom,” they thought they were looking for. They dangled right in front of their perplexed faces.
The keys: the missing emails — and missing link — that could send Griffin and his boss, Rove, to the slammer for a long, long time.
Kingdom enough for ya?
But what’s ‘caging’ and why is it such a dreadful secret that lawyer McNulty put his license to practice and his freedom on the line to cover Tim Griffin’s involvement in it? Because it’s a felony. And a big one.
Our BBC team broke the story at the top of the nightly news everywhere on the planet – except the USA – only because America’s news networks simply refused to cover this evidence of the electoral coup d’etat that chose our President in 2004.
Here’s how caging worked, and along with Griffin’s thoughtful emails themselves you’ll understand it all in no time.
The Bush-Cheney operatives sent hundreds of thousands of letters marked “Do not forward” to voters’ homes. Letters returned (“caged”) were used as evidence to block these voters’ right to cast a ballot on grounds they were registered at phony addresses. Who were the evil fakers? Homeless men, students on vacation and — you got to love this — American soldiers. Oh yeah: most of them are Black voters.
Why weren’t these African-American voters home when the Republican letters arrived? The homeless men were on park benches, the students were on vacation — and the soldiers were overseas. Go to Baghdad, lose your vote. Mission Accomplished.
How do I know? I have the caging lists…
I have them because they are attached to the emails Rove insists can’t be found. I have the emails. 500 of them — sent to our team at BBC after the Rove-bots accidentally sent them to a web domain owned by our friend John Wooden.
Here’s what you need to know — and the Committee would have discovered, if only they’d asked:
1. ‘Caging’ voters is a crime, a go-to-jail felony.
2. Griffin wasn’t “involved” in the caging, Ms. Goodling. Griffin, Rove’s right-hand man (right-hand claw), was directing the illegal purge and challenge campaign. How do I know? It’s in the email I got. Thanks. And it’s posted below.
3. On December 7, 2006, the ragin’, cagin’ Griffin was named, on Rove’s personal demand, US Attorney for Arkansas. Perpetrator became prosecutor.
The committee was perplexed about Monica’s panicked admission and accusations about the caging list because the US press never covered it. That’s because, as Griffin wrote to Goodling in yet another email (dated February 6 of this year, and also posted below), their caging operation only made the news on BBC London: busted open, Griffin bitched, by that “British reporter,” Greg Palast. 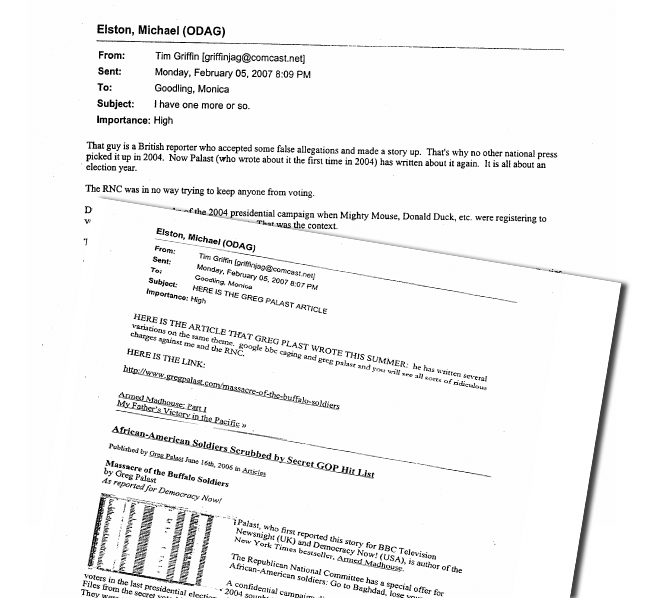 There’s no pride in this. Our BBC team broke the story at the top of the nightly news everywhere on the planet — except the USA — only because America’s news networks simply refused to cover this evidence of the electoral coup d’etat that chose our President in 2004.
And now, not bothering to understand the astonishing revelation in Goodling’s confessional, they are missing the real story behind the firing of the US attorneys. It’s not about removing prosecutors disloyal to Bush, it’s about replacing those who refused to aid the theft of the vote in 2004 with those prepared to burgle it again in 2008.
Now that they have the keys, let’s see if they can put them in the right door. The clock is ticking ladies and gents…
***************
Greg Palast is the author of the New York Times bestseller, Armed Madhouse: from Baghdad to New Orleans – Sordid Secrets and Strange Tales of a White House Gone WILD. For more info, or to hear Brad Friedman, Ed Asner and other troublemakers read from Armed Madhouse, go to www.GregPalast.com