The Frog Who Crushed The Planet Did a French Yuppie really create the Finance Crisis? 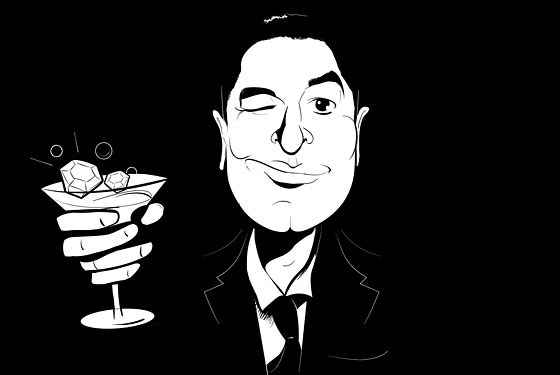 You just knew it had to be one of those brie-biting, Sartre-spewing, overly-garlicked Frenchmen who pushed the Earth’s finance system over a cliff.
This week, US prosecutors finally began the trial of the only person on the entire planet whom they have charged with the financial crimes that sank worldwide stock markets by trillions in 2008 and left millions homeless and jobless, from Detroit to Manchester.
Amazingly, say prosecutors, it all came down to a single Frenchman, Fabrice “Fabulous Fab” Tourre, only 29 years old at the time. Even Julius Caesar waited until he turned 51 to bring the known world to its knees.
Here’s the story which his defence team does not dispute:
In August 2007, hot-shot hedge fund manager John Paulson walked into Goldman Sachs with a brilliant plan to cash in on the US housing crisis.
He paid Goldman to announce that Paulson would invest a big hunk of his fund’s wealth, $200 million, in securities tied to the US mortgage market’s recovery. A few lucky investors would be allowed to give Goldman their billions to bet with Paulson that Americans would never default on their home mortgages.
It was a con. Secretly, Paulson would bet against the mortgage market, hoping it would collapse – making sure it would collapse. All he needed was Goldman to line up the suckers to put up billions to be his “partners”.
It was Goldman’s and Paulson’s financial version of Mel Brooks’ The Producers, in which a couple of corrupt theatre producers schemed to suck investors into a deliberate flop.
Throughout 2007 and 2008, Paulson & Co. worked with Goldman to create the financial equivalent of Springtime for Hitler.
Paulson personally chose the group of mortgages for the fund. Rather than pick the least risky, he deliberately loaded the fund with sub-prime losers. To polish this turd, Goldman and Paulson paid a highly respected risk analysis firm, ACA, to endorse the selection. Paulson and his vice president met with ACA to assure them of the value of the crappola – never telling ACA that, in fact, Paulson would profit if the securities failed.
Based on Paulson’s pitch, ACA endorsed the value of these “synthetic derivatives” securities. This led rating agencies Moody’s and S&P – recipients of fat fees from Goldman – to give the package an AAA rating – that is, marking them as safer than US Treasury notes.
In just a few weeks, by August 8, 2008, the securities lost 99 percent of their value.
The dupes paid up. One, Royal Bank of Scotland, handed over nearly a billion dollars ($840,909,090) to Goldman. Goldman then quietly shifted the loot, minus its fee, to Paulson & Co.

For more on Paulson and what he bought with your money, see Billionaires & Ballot Bandits

The payout busted RBS. But don’t shed tears. The Bank of England and British taxpayers took over the bank and covered the loss.
The collapse of RBS and the billions lost by others in the scheme fuelled a panic which caused banks in the US to shut their lending windows, refusing to re-finance sub-prime mortgages. Over two million American families now faced eviction.
Paulson was thrilled. Each default and eviction just made Paulson & Co. richer, altogether pulling in a profit for his hedge fund of over $3.5 billion on the Springtime-for-Hitler game. Paulson’s personal earnings on this economic tragedy exceeded one billion dollars.
I happened to be in Detroit that August, at the home of auto union member Robert Pratt. He’d already received his eviction notice. Like almost all black home buyers in the USA, he was steered to a “sub-prime” mortgage. Under a formula years later deemed to be “predatory”, his payments suddenly doubled. Pratt’s mortgage balance grew to $110,000 on a home worth $30,000. The bank would not refinance, so Pratt prepared to move into his car with his wife and four kids.
Government watchdogs hunted for the financial crimes perpetrators, and, discovering the Goldman/Paulson fraud, brought charges against… the French kid. Goldman had leant Fabrice Tourre to Paulson to take on flunky tasks, including putting together a 28-page “flip book” to lure European banks into the scam.
In a text message discovered by investigators, Fabrice admitted to a friend that he couldn’t understand the insanely complex derivatives Paulson had crafted with Tourre’s bosses at Goldman. He did, though, grasp that the strange securities were, he wrote, “monstrosities”.  A collapse was coming that would “bring down the whole house”, leaving Fabrice standing in a ruined planet – with a fat bonus.
What did the Feds do to Paulson? He received… a special tax break.
Am I defending the Fabulous Fabrice, the French-fried scapegoat? After all, he was just along for the ride. But he was deeply thrilled to carry water for the Bad Boys. And the charges against him are merely “civil”, meaning he won’t get jail time even if found guilty.
And what about Goldman, whose top brass knew of the entire game? The Securities and Exchange Commission did fine Goldman for its duplicity – a sum equal to 5 percent of the cash Goldman got from the US Treasury in bail-out funds.
After Goldman’s con became public, its CEO Lloyd Blankfein was hailed as a visionary for offloading mortgage-backed securities before the shit hit the finance fan. Blankfein hailed himself for, he said, “doing God’s work”. God did well. Blankfein’s bonus in 2007 brought his pay package to $69 million for the year, a Wall Street record.
Rather than prison or penury, Blankfein was appointed advisor to both the business and the law school at Harvard University.
So here’s the lesson all Harvard students are taught: If you can’t do the time, don’t do the crime… unless your booty exceeds a billion.
* * * * * * * *
Greg Palast is the author of the New York Times bestsellers, Billionaires & Ballot Bandits, The Best Democracy Money Can Buy, Armed Madhouse and the highly acclaimed Vultures’ Picnic, named Book of the Year 2012 on BBC Newsnight Review.
HELP US FOLLOW THE MONEY. Visit the Palast Investigative Fund’s store or simply make tax-deductible contribution to keep our work alive!
For media requests contact us.
Subscribe to Palast’s Newsletter and podcasts.
Follow Palast on Facebook and Twitter.
www.GregPalast.com