The Day the President Turned Black
But has he turned back? 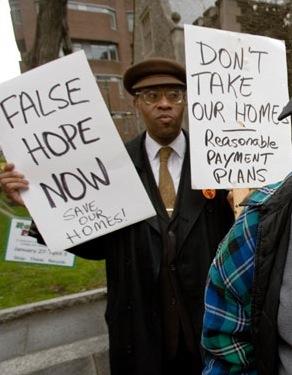 He’s in hot water now. For a moment, on national television, the President of the United States turned black!
Last week, when his buddy “Skip” Gates got busted for being Black in Boston, Barack Obama forgot his official role: to soothe America’s conscience with the happy fairy tale that his election marked the end of racism in the USA.
Instead, Obama, the excruciatingly middle-of-the-road President, was seized by Barack the militant State Senator from the South Side of Chicago, who reminded us that cops bust Black guys for no goddamn good reason all the goddamn time.
I’m reminded that it was not so long ago that we watched the vicious gang-beating by Los Angeles cops of a defenseless, handcuffed, Rodney King, an African-American. King’s beating was unusual only in that it was caught on videotape.

Yeah, I know: we’ve come a hell of a long way. Obama won, Jessie cried, Beyoncé has her own line of perfume and Tiger Woods plays where 30 years ago he couldn’t eat lunch.
Good on them.
But what about Robert Pratt, Mr. President?
Pratt, a United Auto Workers member, has five kids and a mortgage payment of $1,100 a month on a house in Detroit worth no more than $40,000. The payment’s astronomical because he pays 11% on his mortgage balance, double the national average interest rate. Now, on those crazy terms, he’s sure to lose his house.
How did that happen? Pratt, whose story we’ve been tracking, was “steered” into a sub-prime loan by Countrywide Financial. “Steering” is the polite term for forcing folk into crappy loan terms. And not just any folk: Black folk, like Pratt. Over 60% of African-American mortgage applicants were (and ARE) steered into “sub-prime” predatory loans.
According to exhaustive studies by the Federal Reserve Board and the Center for Responsible Lending (CRL), African Americans are 250% more likely to get a loan with an “exploding interest” clause than white borrowers – and notably, the higher the income and the better the credit rating of a Black borrower, the more likely the discrimination.
As an economist, I can tell you it’s not a stretch to say that Obama’s failure to deal with endemic racism in the finance system is killing off hope of the nation’s economic recovery. The “exploding rate” attack centered on Black and Hispanic communities has, according to the CLR, caused 40.2 million homes to lose value due to their proximity to foreclosed properties.
Yet, not a peep from the Obama Administration about ending this Ku Klux lending practice which has laid waste Black neighborhoods and taken a hunk of White America’s housing values with it.
Instead, Obama’s Chief of Staff Rahm Emanuel is the honored guest of the Board of Directors of JP Morgan, owner of one of the most outrageous of the financial predators, Washington Mutual. Morgan/WaMu, with its racially-poisoned mortgage trickery, makes the Cambridge Police Department look like the NAACP.
(Indeed, Emanuel’s host JP Morgan was sued last week by the NAACP for “systematic, institutionalized racism in making home mortgage loans.”)
The cold truth is, financial attacks on the Black community continue as freely under Obama as under Bush, despite Obama’s power to halt it instantly by banning loan-sharking as a condition of continued bail-outs for these banks. Obama has directed the FDIC to guarantee JP Morgan loans, saving the bank $3.1 billion this year. Obama has directed the FDIC to guarantee Mr. Pratt, uh, “hope.”
And what about Thomas Johnson, Mr. President?
Johnson’s a minister in Florida who lost his vote in 2000, alongside at least 94,000 others falsely accused of being felons without the right to vote. Most of the innocents accused and abused were Black, the minister included. I know, because I saw those state records with the carefully recorded “BLA” next to the voters’ names.
I had an editor on the story, won’t say his name because he was so typical, who asked me why Johnson, an African-American, didn’t pound the table and DEMAND his ballot. Johnson’s no Harvard professor in Boston with the President’s phone number on his speed dial.
My extremely white editor, a Yale graduate, sitting in San Francisco, could not imagine what would happen if a dark-skinned Rev. Johnson had started making a scene in Alachua County, in the Deep Deep South. The Reverend was smart not to pull a “Skippy Gates” and lip-off at authority: just a couple months ago, Alachua cops ‘Tased’ an angry, but unarmed, Black man, then shot him dead with seven bullets.
Johnson’s vote loss, you might say, was “so 2000.” This is post-racial 2009. Bullshit. In last year’s election, Florida went right back into the racially biased block-and-purge of Black voters, barring thousands from the ballot through new ID laws that would have made Jim Crow segregationists of the Fifties proud. (See the investigative report, “Block the Vote,” by myself and Bobby Kennedy, from the October 2008 Rolling Stone).
Yet, the Obama Administration appears quite squeamish about taking down the nouvelle ballot-box Bull Connors.
Venom
What I’m saying is that the venom of structural racism in America continues to sicken us all, in our economy, in our voting stations, in our schools (don’t get me started), our health care system, our … well, you name it.
Yes, I joined the Hope Parade and voted for Obama, expecting just this one change: a direct attack on the remaining areas of official sanction of racist policies and practices. I’m still waiting.
It was quite inspiring, last Thursday, to the see a Black man appear, if momentarily, behind the Presidential seal. Unfortunately, Obama’s swift demand for equal justice under the law was provoked only when the whip came down on someone, like himself, whose professional and class status had, they presumed, made them exempt from the daily insults and assaults visited on their less privileged brothers.
So much was made of Gates’ Harvard post that the issue seemed to be “It’s not right to cuff a dark-skinned man who’s a HARVARD PROFESSOR.” The race-neutral rules of class privilege had been violated.
What’s missing in America – and in the Oval Office – is any hint of outrage at the systemic cruelties visited on Black Americans, like Pratt and Johnson, who lack a key to the Harvard Alumni Club.
******
Greg Palast, an expert in finance and regulation, is the author of Armed Madhouse: Strange Tales and Sordid Secrets of a White House Gone Wild. His investigative reports for BBC Television and Democracy Now were recently released as a film on DVD: Palast Investigates: From 8-Mile to the Amazon, on the Trail of the Financial Marauders.
Sign up for his reports at www.GregPalast.com.