The Civil War Began on November 4
The Trump Coup to Come?

[January 20, 2021, Washington DC] While President Donald Trump takes his oath of office today in the White House bunker, the capital remains subdued, quiet except for the shriek of sirens and the black unmarked SUVs rushing to pick up the bodies of the “Antifa rioters,” as Trump called them, shortly before Attorney General Bill Barr’s December invocation of the Insurrection Act.

National Guard troops are refusing the President’s shoot-to-kill order but the deputized Customs and Border Protection officers show no hesitation.

Former Vice-President Joe Biden issued this statement from the basement of his Delaware home:

“While we find the results terribly disappointing, I will not obstruct the workings of America’s democracy. I have asked the state parties to halt any attempt to count the unopened mail-in ballots. I cannot guarantee the safety of those working at the count.

“I am asking all Americans, whether you voted for me or not, to come together and end the violence. Today, I do my part. I have called President Trump to congratulate him on his victory in accordance with our constitutional process. And may God bless America.“

But by that time, no one gave a good goddamn what Joe Biden had to say, not the AtomWaffen nor the Three-Percenters setting fuses around his compound, nor his supporters watching Chief Justice Barrett administering the oath, “To protect and defend the Constitution” broadcast on flickering web channels.

A special gift for those waiting in line:

While you’re waiting to cast your ballot stuck next to that coughing schmuck wearing a MAGA hat but no mask, why not download a free copy of The Art of the Steal, the full-color comic book I wrote with Ted Rall.  And if the wait takes hours, why not download and enjoy the eBook or the Audiobook of How Trump Stole 2020, no charge this week.

[November 7] From this distance, I can see the black smoke rising from the Miami-Dade County Building. The last of the line of ambulances has just pulled away.

One by-stander, name withheld, told me it reminded him of the “Brooks Brothers Riot” organized by Roger Stone during then Bush-Gore election count. This time, Stone’s troops, the Proud Boys, didn’t wear Brooks Brothers suits.

Unconfirmed reports are that all poll workers survived, though none of the ballots.

The word from Jacksonville is less hopeful. On Thursday, the President re-tweeted a rumor that several pallets of absentee ballots had been sent from Venezuela. Within the hour, the main post office was in flames.

Laurel Lee, Florida’s Republican Secretary of State, ordered a halt to the ballot count, much as her predecessor Katherine Harris did in 2000.

The GOP-controlled Legislature declared, as they did in 2000, an early end to the ballot count. They cited the impossibility of locating the missing mail-in ballots, the nearly 700,000 absentee ballots challenged for wrong signature, 200,000 “spoiled” and 150,000 with postage due which, they claimed, could not be tallied in time for the November 17 Florida Presidential Elector “certification” deadline.

Citing Article II of the Constitution, which gives absolute authority to state legislatures to choose the winning slate of Electors, the Florida Senate and House have passed a law, as they did in 2000, stating that no ballots counted after November 6 would be accepted in the tally. The law guaranteed a victory for Trump’s slate of Electors.

And in Michigan and Pennsylvania, Biden’s early poll leads have come to naught. The count is hopelessly delayed due to the riots in Philadelphia and the sabotage of the count in Detroit by Trump’s Oath Keeper “poll watchers” challenging every ballot, as the GOP had practiced in 2016.

Republican legislators in control of legislatures in those states, citing Article II, declared that their states would not certify any slate of Electors. A spokesman for Michigan House Speaker Lee Chatfield said, “There are thousands, millions, of fraudulent mail-in ballots out there. We just can’t certify this as an honest election. And with all the violence and looting, we cannot continue the count — and therefore, will certify no Electors at all.”

The move was a brilliant gambit on behalf of the President. With states refusing to certify Electors, neither Biden nor Trump could gather 270 votes in the Electoral College, handing the choice of President to Congress. Under the Constitution’s XIIth Amendment, each state received one vote. Wyoming, the Dakotas and, in all, 26 Republican-majority delegations easily outvoted California, New York and the 23 Democratic-controlled delegations.

Biden’s lawyers, via Zoom, refusing to reveal their location, submitted the Democratic Secretary of State’s slate of Electors to the Supreme Court, citing the Electoral Count Act of 1887. John Roberts showed no rancor toward Trump for replacing him as Chief Justice. Indeed, sources say, Roberts wrote the unsigned opinion of the Court, “The Electoral Count Act is not the law. We are the law.”

[January 22. Oakland.] We can confirm that over 150,000 Americans, an extraordinary mix of young and old have responded to the call to gather at Fort Bragg, now renamed Fort Freedom, where quiet, determined soldiers handed out spare uniforms and weapons.

And on the wooden boards of 10,000 burnt-out store fronts, from Houston to Minneapolis, a simple spray-painted message, “LET FREEDOM RING.”

Dear readers, I wrote these “news reports from the future” three months ago, but I did not think America was ready to hear it. And I hope this remains nothing more than my dark nightmare and will disappear with the morning light.

Will voters, or violence and sabotage, re-elect the President? I don’t know. But I can say I never imagined that, in my lifetime, Americans would have to ask that question. 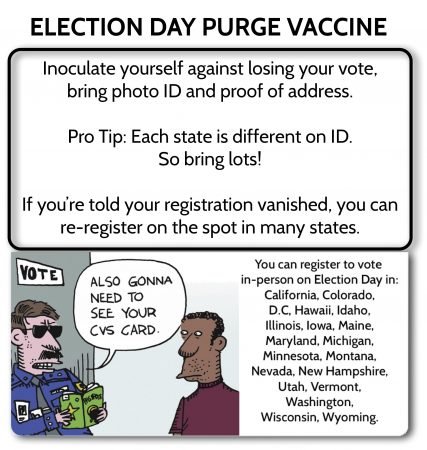