Texas Gets Lay’d: How the Bush Family turned off the lights

Maybe because Texas gave us that wet-lipped huckster Ted Cruz, you think the state deserves to freeze in the dark. 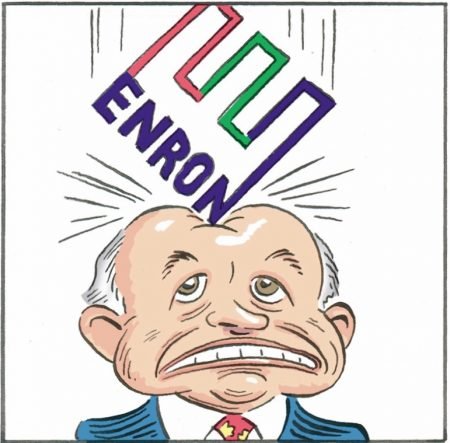 I get that, but it’s not their fault, at least not the victims burning family heirlooms to stave off frostbite.

“What happened was entirely predictable,” power distribution expert attorney Beth Emory said of the blackouts. She told me this twenty years ago, after the first blackouts in Texas and California, following the cruel experiment called “deregulation” of the power industry.

Until 1992, the USA had just about the lowest electricity prices in the world and the most reliable system.

For a century, power companies had been limited by law to recovering their provable costs plus a “reasonable,” i.e. small, profit. But in 1992, George H. W. Bush, in the last gasps of his failed presidency, began to deregulate the industry.

“Deregulate” is a misnomer. “De-criminalize” describes it best. With the “free market” supposedly setting the price of power, Texas-based Enron was freed to use such techniques as “Ricochet,” “Get Shorty,” and “Death Star” to blow prices through the roof when weather shut down power plants. (This week was not the first game of Texas Gouge’m.)

Enron was not the only Lone Star power pirate. Houston Power & Light was “ramping” plants up and down at odd hours which whistleblowers said was deliberate.

This week, wholesale electric prices in Texas, normally $50 per megawatt-hour, busted over $9,000/MWHR. Again. It happens with every cold snap and heat wave. One shop owner, Akilah Scott-Amos, showed the Daily Beast her electric bills which blew up from $34 per month to $450 for a single day. (Update: Akilah just reached out to us via Twitter and told us the balance she owes has now risen to a staggering $11,048.75 due to surge pricing!)

Cutting the Power Lines to Texas

Every state in America interconnects their power lines to provide back-up in case of emergencies. Except Texas. To prevent federal regulation, Texas deliberately has refused to connect its lines to other states.

The federal government, which has restored a modicum of protection, can only police utilities that are connected to the national grid. So, Texas literally cut itself off from the rest of the USA’s electric system.

But California is sitting on massive excess power capacity. With 80,000 megawatts of capacity, the Golden State often gives away power free to other states. This week, the sun is shining here in LA — and our solar, wind and hydro generators could easily un-thaw Texas if the Lone Star hadn’t been Lay’d by the Bushes.

Of course, the rulers of Texas, the beneficiaries of freezer-burn pricing, know this. This week, former Texas Gov. Rick Perry, Trump’s first Energy Secretary, said, “Texans would be without electricity for longer than three days to keep the federal government out of their business.”

Well, Rick and Ted can tan in Cancun while oxygen machines in Laredo shut down.

I didn’t need a crystal ball in 1998 when I predicted that California, Texas, Oregon and Rio de Janeiro would go dark and cold if they de-regulated their power markets.

In a series of lectures at Cambridge University, the London School of Economics and the University of Sao Paolo [yes, I had a life before journalism], I said, in academic terms, the screamingly obvious: There is no such thing as a “free” market in electricity. Electricity isn’t a bagel. You can’t skip it in the morning when the price goes berserk nor shop at another electricity store.

The alternative to blackouts and price gouging is Democracy. Regulation is merely the enforcement of publicly voted rules to protect the public from economic overlords.

This alternative to free market mania was first applied by the man who electrified America, President Franklin D. Roosevelt.

To the people of the country I have but one answer on this subject. Judge me by the enemies I have made. Judge me by the selfish purposes of these utility leaders who have talked of radicalism while they were selling watered stock to the people and using our schools to deceive the coming generation. My friends, my policy is as radical as the Constitution of the United States. I promise you this: Never shall the Federal Government part with its sovereignty or with its control of its power resources while I’m President of the United States.

To make his point, the Roosevelt Justice Department arrested the nation’s top utility executive and busted up his holding companies.

Democratizing the electric system also produced another alternative to Ken-Lay-ism: socialism. In the 1930s, much of America had no electric service. Roosevelt launched the massive rural electric cooperatives, Tennessee Valley and Bonneville Power Administrations, and other publicly-owned systems that provide cheap, reliable non-profit power to one fifth of America.

Darkness at noon in Portland

The reason Portland, Oregon, went dark this week goes back to July 20, 2005, when the Governor of Oregon, Ted Kulongoski, vetoed a bill that would have allowed the city’s residents to take ownership of the Enron-owned power system.

According to my professors, Milton Friedman and George Stigler, the problem with the formerly regulated and publicly-owned systems is that they were too reliable. Utilities, which could only charge what they spent, supposedly “gold plating” the system – i.e. invested too much into making sure it works.

The privateers of Portland and of Houston can now pocket the savings from letting their systems decay. And they have.

So, the solution to the deadly darkness is obvious: More Roosevelt, less Bush.

My treatise on the utility industry, co-authored with Jerrold Oppenheim and Theo MacGregor, was published by the United Nations International Labor Organization as Democracy and Regulation: A Guide to the Control of Privatized Public Services [Pluto Press 2003].