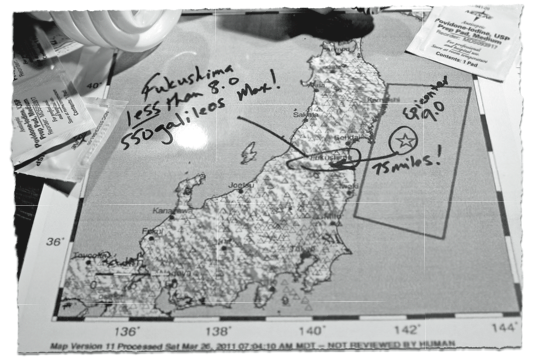 The Fukushima story you didn't hear on CNN

I’ve seen a lot of sick stuff in my career, but this was sick on a new level. Here was the handwritten log

“There is a special place in hell for publishers who run from their authors like craven dogs, who don’t mind sensationalism that sells… until the game gets rough.”
Jim Hatfield? Wasn’t he some kind of whack-o? Some kind of Conspiracy Theorist with fruitcake ideas out to get the Bushes?
I’ve got to admit it. That’s the first thing that popped into my head when Soft Skull suggested I write an introduction to the new edition of Hatfield’s Fortunate Son.
But then I read the book.

Inside Corporate America
After the attack on the World Trade Center, some enterprising hucksters here in New York tried to sell little bags of ashes to victims families, supposedly of their missing kin.
The stomach-churning commercialization of mass murder didn’t bottom out there. Barely had the towers hit the ground when U.S. Trade Representative Robert Zoellick proclaimed the way to defeat Osama bin Laden was to grant George W. Bush extraordinary ‘fast-track’ trade treaty negotiating authority. Ambassador bin Zoellick, speaking from what looked like a cave on Capitol Hill, surrounded by unidentified Republicans, said Americans had to choose: stand up for free trade or for terrorism.