With Supreme Court blessings, voter ID laws are taking the nation by storm, or storm troops.

How to Steal an Election in 9 Easy Steps.

Stop me if you heard this one. See, these ten nuns walk into a polling station in Indiana and the guy in charge says, “Whoa, Sisters! What do think you’re doing?” 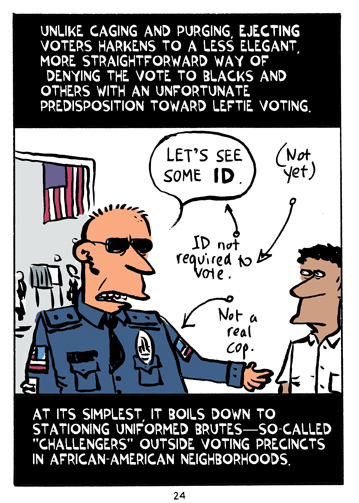 “Well, not here, ladies; not without your ID!” He demanded their driver’s licenses, but the ten quite elderly Sisters of the Holy Cross, including a 98 year-old, had long ago given up cruising.

“Scram, Sis!” said the man, and kicked their habits right out of the polling station.

I may not have gotten the dialogue exactly right, but I got the gist of it and the facts: the ten nuns who’d been voting at that station for decades were booted out in 2008, just after the state of Indiana’s Republican legislature imposed new voter ID laws.

The reason for nixing the nuns? To stop voter identity theft. There wasn’t exactly a voter identity crime wave. In fact, despite no photo ID requirement, there wasn’t a single known case of false identity voting in the state in over one hundred years.

About four hundred thousand voters (9 percent of Indiana’s electorate) are African American. Nearly one in five (18.1 percent) lack the ID needed to vote, according to Matt Barreto of the University of Washington.

That’s twice the number of whites lacking ID. Therefore, as many as 72,000 black voters will get the boot when they show up to vote this November. Coincidentally, that’s three times Barack Obama’s victory margin in that state in 2008. Coincidentally.

And who are the white folk lacking ID? The elderly, like the sisters, and students like Angela Hiss and Allyson Miller, whose official state IDs don’t list their dorm room addresses and so can’t be used to vote.