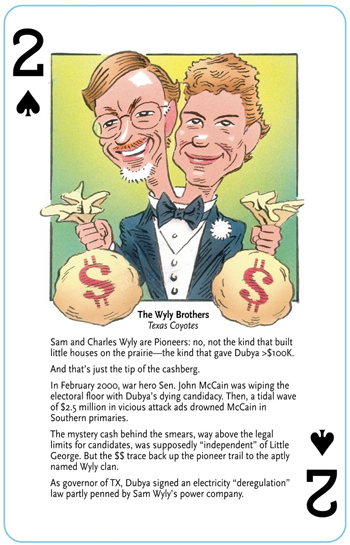 From the Joker’s Wild card deck

Sam Wyly is one of the planet’s “Ten Greenest Billionaires,” according to Forbes. And, the magazine should have added, the one that deserves the most prison time.

Yesterday, the Securities and Exchange Commission charged billionaire Sam and his billionaire brother Charles with a stock market fraud which sucked over a half billion dollars out of their victims’ pockets. That’s nothing. The SEC has only uncovered the rattling tale of the Wyly snake.

This billionaire boys club is best known for backing the smear campaign against John McCain credited with giving George W. Bush the GOP nomination for President in 2000.  In 2004 they backed the Swift Boat smear on John Kerry.

END_OF_DOCUMENT_TOKEN_TO_BE_REPLACED

“The Best Thing in The World for Big Oil”
…Bobby Kennedy Jr. and Palast on why Saddam had to go.

Listen to RFK and Greg Palast on Iraq, a 20-minute conversation about blood and oil for ‘Ring of Fire’ from Air America. END_OF_DOCUMENT_TOKEN_TO_BE_REPLACED

Greg Palast, in his new book Armed Madhouse, offers a pretty plausible answer to this question: Why did the US invade Iraq?

Short answer: It’s the oil, stupid — and the point is not to sell it, but to control it.

END_OF_DOCUMENT_TOKEN_TO_BE_REPLACED

06.19.06 – (Eds. note: This piece is part of a serialization of Greg Palast’s newest book, Armed Madhouse. Palast’s Armed Madhouse book tour is co-sponsored by Working Assets.)
Continued from Part I

What Does Osama Want?

So what is his mission? What does Osama want? Why kick the U.S. out of Saudi Arabia? When, in March 2003, George Bush told the people of Iraq, “Do not destroy oil wells,” his words were heartfelt but hardly original. In bin Laden’s 1996 Declaration of War, he warned all good Muslims against: Destruction of the oil industries… I would like here to alert my brothers, to protect this oil wealth and not to include it in the battle.

Bin Laden listed other beefs in his Declaration of War. There are some who have the notion that bin Laden, though inexcusably violent, is somehow giving voice to the oppressed. Those who fancy bin Laden as the defender of the wretched of the earth have neither read his writings nor followed his actions. The poor get no column inches in his “Declaration.” Creating a Palestinian state? It’s not mentioned in his fabulously long screed. Rather, the billionaire scion and former heir to the bin Laden Construction fortune launches into an angry diatribe about, of all things, Saudi Arabia’s failure to pay past due invoices owed to: great merchants and contractors [waiting for] hundreds and thousands of millions of riyals owed to them by the government.

The House of Saud, it seems, was late in paying bin Laden Construction (which had a huge contract to rebuild Mecca).

Bin Laden is no fool; he knew why the Saudi government became a deadbeat bill payer. He was writing in 1996 when the price of oil was flat on the floor, near $10 a barrel, an all-time low; and Osama cried: People wonder, are we the largest oil exporting country? So much oil, so little cash to show for it.

What drove Osama’s declaration of war? The poverty in Islamic nations? Not a mention. Lack of freedom? Forget it. Bin Laden’s causus bellum for war on America: The presence of the U.S.A. Crusader military forces on land, sea and air in the states of the Islamic Gulf is the greatest danger threatening the largest oil reserve in the world.
Threatening Islamic oil reserves. Osama even launches a sophisticated tirade against the suppression of oil production by U.S. operators in the Gulf. This wealthy engineer knows the petroleum biz, that’s for sure.

If you want to know what motivates Osama, follow his path. Long before Al-Qaeda destroyed the World Trade Center, Osama, after removing, with U.S. help, the Soviets from Afghanistan, set up operations in Sudan, where oil men expected to find the next big gusher.

Osama’s next target was not The Great Satan America but The Little Satan: Iran. In Osama’s view, Iranians are Shia “dogs and lackeys” who hold, infuriatingly, OPEC’s third largest oil reserves. Osama was especially affronted by Iran’s rising influence in Afghanistan at the time, thereby blocking his ability to link up with fundamentalist militants in Uzbekistan and Tajikistan who were fundamentally coveting control of the Caspian nations’ oil wealth. Osama expressed his displeasure with Iran’s incursion on his turf by ordering the slaughter of the entire Iranian diplomatic mission to Afghanistan. After eliminating his Shia Iranian competitors in Afghanistan, Osama financed the Wahabi-influenced Taliban. Notably, Osama had no objection to the Taliban signing pipeline deals with U.S. oil firms.

In other words, if you follow Osama’s movements and read what the man says, you realize he has been less coy than Bush about his true program: Get the oil. The steps are: First, remove the Soviets from the Caspian oil fields and pipeline routes; second, remove the man he called an evil “socialist,” Saddam Hussein, from the second largest OPEC reserve; third, keep the Shia “dogs” who control the third largest reserve from expanding their influence outside Persia; fourth, remove U.S. troops from the Land of the Holy Places (and largest oil reserve), Saudi Arabia; then fifth and last, overthrow the House of Saud and re-create a new Caliphate stretching from Sudan to Kazakhstan, every province an oil state, a Petroleum Kingdom of God, presumably under His blessed servant and contractor Osama.

And so, to protect those reserves””if his foolish “brothers” don’t burn the oil wells””he’s declared his own Operation Islamic Liberation. O.I.L.

What motivates Osama? Same thing as George and Dick. It’s all about the oil.

We’ve long jumped over Hubbert’s predicted peak and, in 2006, rolled our SUVs right through the “culmination”- that is, used the last drops of the one-and-a-quarter-trillion barrels of liquid crude the good Earth can provide according to the Hubbert jeremiad. Furthermore, “The rise in the production of power from nuclear energy for the United States” ran out long before uranium’s five-thousand-year reign, despite Hubbert’s hope and prediction. END_OF_DOCUMENT_TOKEN_TO_BE_REPLACED

Sister Mickey of the Srs of Bernard@mickey94114·
7h