Venezuela: The Trump Coup And Our Next Oil War – Jimmy Dore interviews Palast

The Kochs have giant refineries on the Gulf Coast of Texas. They can't use Texas oil because it's not heavy and filthy enough, so they have to take almost all their oil from Venezuela. END_OF_DOCUMENT_TOKEN_TO_BE_REPLACED

In Venezuela, White Supremacy is a Key to Trump’s Coup

On January 23, right after a phone call from Donald Trump, Juan Guaidó, former speaker of Venezuela's National Assembly, declared himself president. No voting. When you have official recognition from The Donald, who needs elections? END_OF_DOCUMENT_TOKEN_TO_BE_REPLACED

The fact that the party of the late Hugo Chavez lost two-thirds of the seats in Venezuela’s congress puts a lie to the canard that the Bolivarian Republic of Venezuela as created by Chavez is some kind of dictatorship, a nasty bit of END_OF_DOCUMENT_TOKEN_TO_BE_REPLACED

Hugo Chavez vs “The Network”

London, February 2002. A tiny, dark and intense woman waited at the end of a lecture until I was alone, brought her face strangely close to mine and whispered, “President Chavez needs you. Right now. To Caracas. Right now. You must come to see him.” 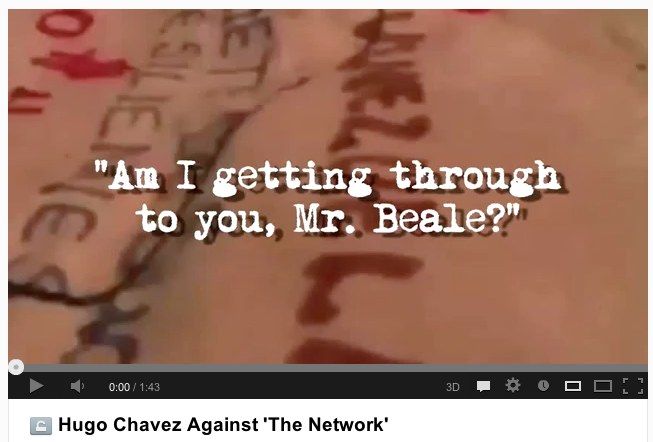 President Who? All I knew about this Hugo Chavez guy was that he was an Latin-American jefe, led a bungled coup and was filled with a lot of populist bullshit and a lot of oil.

And I also knew that no one at BBC Newsnight END_OF_DOCUMENT_TOKEN_TO_BE_REPLACED

The Koch Brothers, Hugo Chavez
And The XL Pipeline

Greg Palast for Vice Magazine and The Other 98%

I’ve been tracking a tube of black putrid ooze, a toxic viper slowly slithering 2000 miles across the belly of America, swallowing END_OF_DOCUMENT_TOKEN_TO_BE_REPLACED

Big Oil, Big Ketchup
and The Assassination of Hugo Chavez

‘The Assassination of Hugo Chavez’
Download the Film for Free

Watch part of the interview.
END_OF_DOCUMENT_TOKEN_TO_BE_REPLACED

$300 MILLION FROM CHAVEZ
TO FARC A FAKE

Do you believe this?

In early March Colombia invaded Ecuador, killed a guerrilla chief in the jungle, opened his laptop – and what did the Colombians find? A message to Hugo Chavez that he sent the FARC guerrillas $300 million – which they’re using to obtain uranium to make a dirty bomb!

Exclusive interview with the
President of Ecuador

This week, Colombia’s military invaded Ecuador, killing a guerrilla leader hiding there. Undoubtedly, the invasion, which has brought Ecuador, Colombia and their border-mate Venezuela, to the bring of war, was meant to undermine the new, progressive, and very popular government of Rafael Correa, Ecuador’s new President.Correa, shining new star of South America’s rising Left, and an ally of President Hugo Chavez, granted an extraordinary interview to Greg Palast, Correa’s only English-language interview of his presidency.

Watch or listen to an excerpt as broadcast two weeks ago on Democracy Now!

And catch Palast’s interviews with President Hugo Chavez for BBC Newsnight and on-the-ground investigations on the DVD, “The Assassination of Hugo Chavez.” Trailer here. 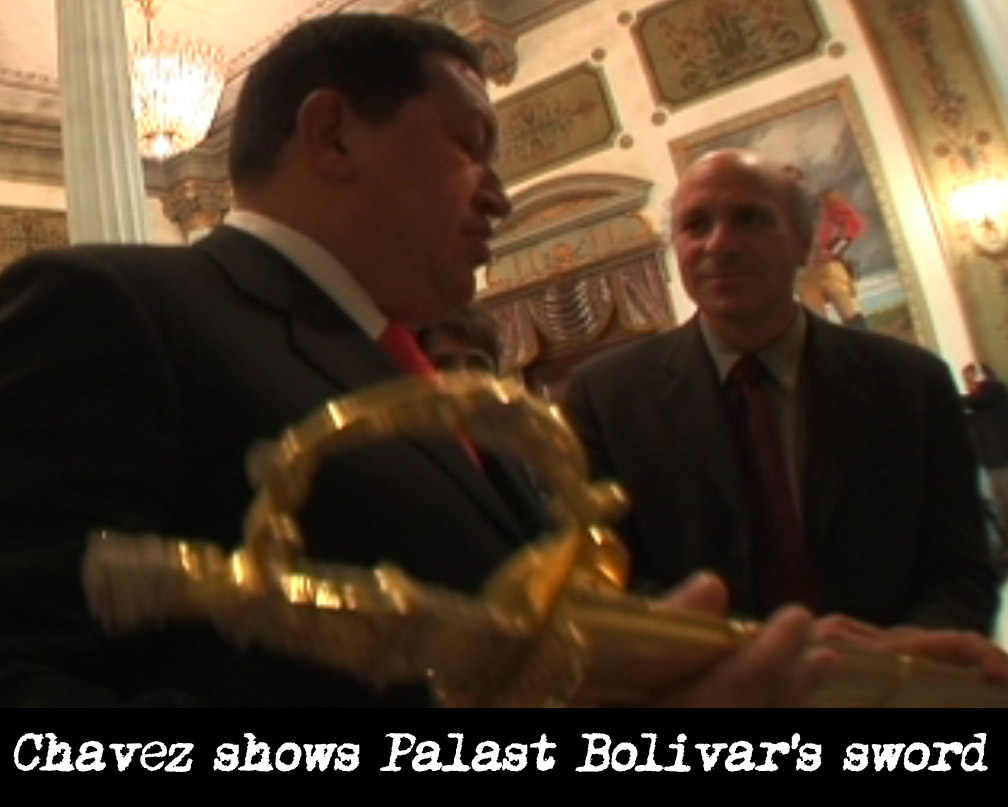 It would all be a poignant joke – except that the indigenous tribe is suddenly the odds-on favorite to defeat the oil company known for naming its largest tanker, “Condoleezza,” after former Chevron director, US Secretary of State Condoleezza

Flying out of the rainforest, past the Andes volcanoes, Palast gets the other side of the story in Ecuador’s capitol, Quito. “It’s the largest fraud in history!” asserts Chevron END_OF_DOCUMENT_TOKEN_TO_BE_REPLACED

The Assassination of Hugo Chavez

Before The Lord spoke unto Pat Robertson and told him to endorse Rudy Giuliani, family man, for President, the Reverend got a message that higher powers wanted him to arrange a hit on another President:

“Hugo Chavez thinks we’re trying to assassinate him. I think that we really ought to go ahead and do it.”

Robertson has a tough time separating Church and Hate. But when the vicious vicar declared it was time to take out the President of Venezuela, he was simply channeling the wishes of the Supreme Authority, Dick Cheney.

I’m asking you to see the story they don’t want you to see in the USA: from the original investigations filmed for BBC Television, “The Assassination of Hugo”– a special DVD documentary by myself and Rick Rowley. NOT for general release – ONLY available as a gift to donors to the not-for-profit Palast Investigative Fund. Check out the trailer for the film here.
Why must they kill Chavez?

With the help of guerrila cameraman Rick Rowley (“Fourth World War”), I flew to Caracas to get the answer – from Chavez himself. I also talked to the guy who took Chavez hostage in 2002. (I had to wear a wire for that one.)

The answer is right underneath Chavez’ feet. Oil. How much? According to the inside documents that fell into my hands from the Department of Energy – LOTS of oil, five times the reserves of Saudi Arabia.

The DVD includes Chavez himself, in our extended exclusive interviews. We go over the Bush plans – for his oil, and for his “elimination.” Sing along with the crooning champion of the poor – or, as George Bush titles him, “a demagogue awash with oil money.”

Watch the film – from Caracas malls to the oil tankers by helicopter – the story I guarantee you won’t get on the Petroleum Broadcasting System.

PLUS two incredibly important reports: “Ecuador: Oiled and Despoiled” – my journey into the mud for Amy Goodman’s Democracy Now, PLUS “Florida Con Salsa” – the theft of the Presidential Election in Mexico 2006.

Donate at least $50 and I’ll sign’m and send’m to you – or to whomever you designate for the holidays.

Make that donation at least $75 and I’ll also send you, signed, “Assassination” AND “The Elections Files,” my investigations for BBC, from the original report that busted open the phony “felon” purge by Jeb Bush to never-before-released interviews with Robert F. Kennedy Jr. and fired prosecutor David Iglesias on “caging” voters and the scheme to steal the next election.

Your tax-deductible donation keeps us digging for “Just The Facts, Ma’am.” I’m writing this in the rain forest in Ecuador, where oil is prevalent as snakes- but more poisonous. We donate our films to Democracy Now. BBC pays for some of our effort – but not the expensive work of investigation. That’s your job. YOU produce our work.

“Palast’s stories are so relevant they threaten to alter history.” – Chicago Tribune

**************
The Palast Investigative Fund is a 501c3 not-for-profit educational foundation. All donations are tax deductible. 100% of your donation goes to pay our out-of-pocket expenses and investigative team. (Note: Greg Palast takes no fee from the fund.) Make a donation and I’ll send you a signed gift, personalized in appreciation for your help. Or write “NO GIFT” and we’ll just send a note of our gratitude. Real reporting is real expensive – and you make it possible when Corporate Media won’t.

As George W. Bush visits Latin America this week the war of words between Chavez and Bush continues. For BBC Newsnight, Greg Palast investigated what is really behind all the rhetoric and headlines.
Watch the BBC Report:
Chavez rules out return to cheap oil END_OF_DOCUMENT_TOKEN_TO_BE_REPLACED

Greg Palast From The Progressive

Not only has Chavez delivered cheap oil to the Bronx and other poor communities in the United States. And not only did he offer to bring aid to the victims of Katrina. In my interview with the president of Venezuela on March 28, he made Bush the following astonishing offer END_OF_DOCUMENT_TOKEN_TO_BE_REPLACED

WATCH THE REPORT — READ ABOUT IT