“Now that the SOB is Dead…”
A Novel Idea: Asking an Afghan about Afghanistan 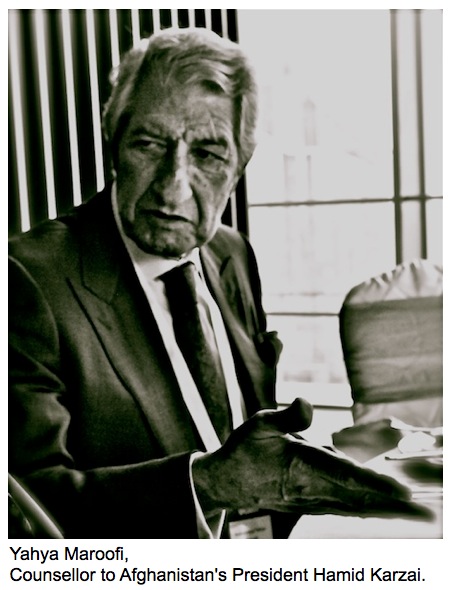 “Now that the sonovabitch is dead, why is the US still angry with us?”

“Us”, in this conversation, are the Taliban. The SOB in question is Osama bin Laden.

The Taliban’s frustration was relayed to me by Yahya Maroofi, Counsellor to Afghanistan’s President Hamid Karzai – Karzai’s Kissinger, if Kissinger had a soul.

The Silk Road nation of Kazakhstan is an excellent place to encounter the dervishes of the Great Game for control of the camel-and-pipeline routes of the Central Asian steppes. Here we can witness the diplomatic-military idiocies of new empires pathetically attempting to ignore the dried skeletons of the imperial forces that went before them.

Maroofi was spending the day in Kazakhstan’s capital on his way to little-noticed peace negotiations – little noticed because neither Uncle Sam nor Great-Uncle Britain were invited. Attendance is limited to those frontline states that will be left holding the grenade when the US and UK pull out the pin with the removal of their troops in 2014. The lineup includes Kazakhstan, Russia, Kyrgyzstan (birthplace of the Boston Bombers) and the big new swinging dick on the block, Turkey, as well as Iran, the nation most feared and despised by the Taliban. The unannounced guests, of course, are the Taliban themselves.

I am moved to recount a bit of my lengthy talk with the Afghan minister after reading reams of meretricious bunkum about Afghanistan from the pens of US propaganda repeaters pretending to be reporters. My favourite is, “Hope Seen for Afghanistan After Coalition Leaves,” in the New York Times. To give us an expert view, two American reporters used their 20-column inches to take down the words of General Joseph F Dunford Jr, commander of all “international forces” in Afghanistan.

Dunford just arrived in Afghanistan for the first time about 12 weeks ago. He may not know a Tajik from a camel fart, END_OF_DOCUMENT_TOKEN_TO_BE_REPLACED