Less than two weeks to go until Election Day – what can you do? 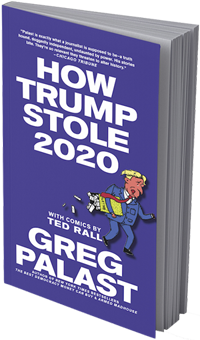 Begin by reading Greg Palast’s How Trump Stole 2020: The Hunt for America’s Vanished Voters and then go out and stop the theft.

Not only is Palast one of our premier investigative reporters he is also a great storyteller, and the best part, the stories are all factual.

This latest tome reads like a rogue’s gallery of real crime. Because they are rogues and they committed real crimes.

Palast came to notoriety in 2000 when he revealed the illegal voter purges in Florida that cost Gore the election. Back then he focused on Governor Jeb Bush and Florida Secretary of State Katherine Harris. In the new book he stalks, rightly, the likes of Georgia Governor Brian Kemp and documents in detail how he helped rig the election he ran against Stacey Abrams in 2018. Kemp used his power as Secretary of State to purge 665,677 voters, overwhelmingly Democrats.

Quick pop quiz – what do these four states have in common? Correct, they like to swing.

Palast’s vicious dissection of Ohio Secretary of State Frank LaRose’s partisan practice is well worth the read. Remember, it was LaRose, for security reasons, who allowed only one ballot drop box per county whether there are more than a million people in Franklin County (Columbus) or 10,000 in Vinton County.

Palast does a great job of exposing the gaming of the system. Like the junk mail mailings in Ohio that include a postcard that, if you don’t return it, you are removed from the voting rolls.

“Large-scale ethnic cleansing of voter rolls, purging those who supposedly ‘moved,’ was not a Kemp invention. Kemp’s not the sharpest chain saw in the toolshed. The Georgian was merely following behind his fellow Republican Secretary of State, Jon Husted of Ohio,” Palast writes.

Like a comic superhero, Palast fights only the evil supervillains like Kemp, Husted and LaRose. Husted is now Ohio’s Lieutenant Governor and sure to encounter Palast again as he moves up the political pyramid.

The also provides telling critiques of coverage by the New York Times and other corporate mainstream media, observing that in a Times story “Frank LaRose is shown photographed in a thoughtful and heroic pose next to his office window.” As Palast notes, a better pose for LaRose would be shredding documents, hiding his infamous purges.

Palast goes into detail on how Trump can steal Wisconsin in 2020. But perhaps the highlight of the book is the ongoing battle between former Kansas Secretary of State Kris Kobach and Palast. Their exchange at an ice cream social in Wichita, Kansas should be remembered in a way similar to the shoot-out at the OK Corral.

Another great feature of the book are the illustrations by Ted Rall. He captures the ironic humor and seedy side of election tampering in the US. I’m lobbying to turn the Palast/Rall collaboration into an animated series like The Simpsons. Their joint work has the same vibe.

There’s a saying we have at the Free Press that goes: “Go ask Palast, because he’s ten feet tall.” Well, he’s not really that tall, but it seems like he is because he casts such a long shadow over the true villians who steal our democracy. 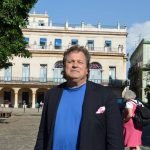 Fitrakis is a Political Science Professor in the Social Sciences department at Columbus State Community College, where he won the Distinguished Professor Award in 2012. He has a Ph.D. in Political Science from Wayne State University and a J.D. from The Ohio State University Moritz College of Law. He was a Ford Foundation Fellow to the Michigan State legislature and currently serves as a Near East Area Commissioner.

He co-authored What Happened in Ohio: A documentary record of theft and fraud in the 2004 election (New Press, 2006), and has authored or co-authored 12 other books including six on election integrity. Fitrakis is the editor of the Free Press, freepress.org and columbusfreepress.com.

Fitrakis has been an election protection activist since March 1994, when he served as an international observer for the national elections in El Salvador. He co-wrote and edited the El Salvador election report for the United Nations. Fitrakis was an election protection attorney on November 2, 2004 in Franklin County. After witnessing election suppression, he called the first public hearings on voter suppression and election irregularities and was one of four attorneys to file a challenge to Ohio’s presidential elections results: Moss v. Bush and Moss v. Moyer.