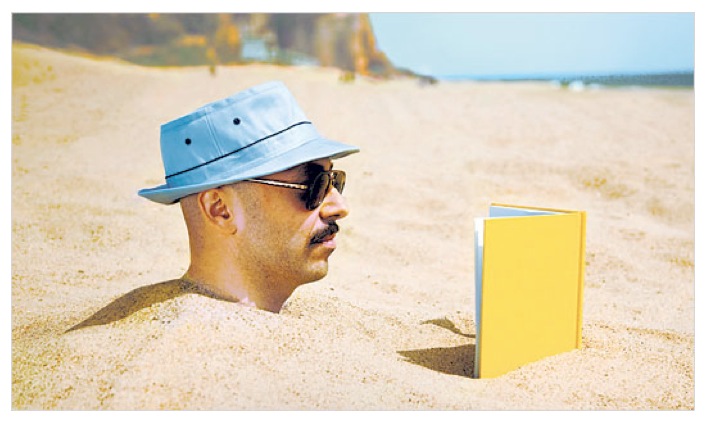 We all have bad habits. And the worst, besides yelling at our kids when we’re hung-over or just generally disappointed, is the daily deal we make with Evil.
Every day we are thrown head first into that dog fight between What is Right, What is Horrible and, our third way, Just-Don’t-Give-a-Shit-ism.
We know we are not Bradley Manning, nor Edward Snowden.  We know we’d better just shut the fuck up.
And that’s the conflict at the core of civilization’s corrosion: not between national security and freedom, but between courage and complicity.
Warren Ellis – you might know his comic books, including Transmetropolitan with Darick Robertson – said that journalism is a terribly weak weapon – though when correctly aimed,can blow the knees off very large villains.
Last week, the US Supreme Court burned a judicial cross on Martin Luther King’s grave, effectively ending the Voting Rights Act. Official apartheid now returns to America’s elections. And by the time you read this, Nelson Mandela will probably be dead – along with his vision of human equality and comity.

In the face of such villainy, my reporter’s weapon feels limp and my aim not so good.  That’s why I’ve deleted my draft of a column which contained my usual screed on the week’s transgressions of our political leaders. Given the limits of journalism, there might be more to learn from fiction and poetry.
I begin with Warren Ellis.
Like the assassin in Gun Machine, his latest novel, Ellis is horrified and angry beyond reason that just to walk across Manhattan for a bagel, you step on the unseen skulls of Lanape Indians, on putrefying corpses of immigrants with tuberculosis, on the evidence of unsolved murder-suicides caused by home foreclosures traced back to algorithmic high-speed derivatives trading.
Ellis’ killer is not completely nuts when he concludes that whoever dies on this ill ground, this poisoned graveyard, deserves it. Deserves the bullet in the skull, or, more commonly, the demotion to part-time security work at a shopping center owned by some toad-licking financier with a shell company in the Virgin Islands.
Both Ellis’ gunman and the cop who hunts him, have – like Manning, Snowden and Mandela–a pathological inability to ignore unpleasant reminders of the flesh on which we’ve built our empires.
The New York Times editor who greedily used Manning’s “Wikileaks” cables, nevertheless called Manning, “disturbed.”  OK, then, let’s accept that courage is a form of insanity. All prophets are nut-cases.
The rest of us are sane.  We stare are our paperwork, brown-nose to a promotion, feel up our once-pretty wife’s prettier sister, and when Satan says, “Hey, thanks,” we pretend not to hear Him.
But Warren Ellis hears Him. In Gun Machine, Ellis uses the police procedural as a brilliantly subversive way to re-tell the Biblical battle in a form that befits our age of lazy-ass electronically-induced ethical somnolence.  Listen:

“Jim Rosato’s killer was a bodybuilder gone to burgers and long days on the sofa.  He was trembling all over. The top of his head was bald and seemed too small to contain a human brain. The name Regina was badly tattooed over his chest, stretched by his hairy tits.  [Police Officer] John Tallow could not in that moment see any reason why he should not just fucking kill him, so he put four hollow points through Regina, and a stopper through the shitbag’s stupid tiny head.”

Hey, we’ve all had days like that.
I’ll admit that my dragging in a comic-book-detective-story writer’s novel has an ulterior motive.  It’s part of my never-ending, disconsolate battle against stupid.
I recommend, I insist that, after reading Ellis’s Gun Machine, you move on to Anna Chen, the Dragon poet, then Michael Griffin and Robert Parry.  Do that, and you won’t have wasted your summer.
It must have been ten years ago.  Under the ill influence of the free wine in the Newsnightgreen room, I remember saying things unkind to your nation’s Poet Laureate.  I think it was his loafers and fey velour-y jacket that made me think he’d just come from some poet’s costume store.  His poems wore loafers, too. 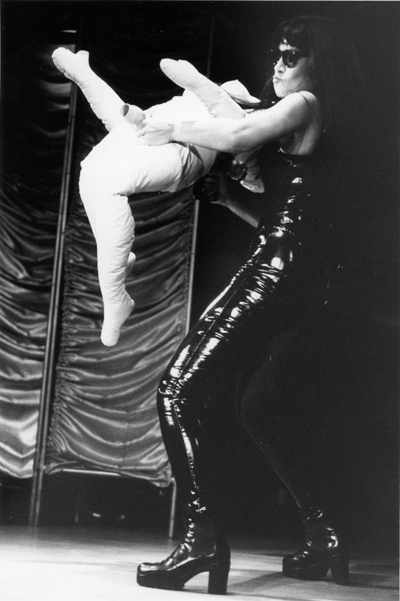 Anna Chen’s poetry wears wet leathers, red lipstick, stilettos – and is heavily armed. Her slim volume, Reaching for My Gnu,is filled with what I’d call “strap-on poems.”  They look like an evening’s easy pleasure but are far more painful and unforgettable than you’d bargained for.Here’s from “Burgers,” describing the need for the artist to get deep into the grime, to the bottom of Life’s Deep Fryer:
“I want a burger that’s not cooked through,
burnt outside with a pinkish hue,
coughed on, sploshed on,
kicked around and noshed on.
One where the chef ’s been to the loo,
a number one and a number two
and a number three if he fancies you.”
Chen, a militant BEAA (British East Asian Artist), playwright who blogs as Madam Miaow, jerks around with race stereotypes in the poems “Yellowface” and “Anna May Wong Must Die!”  They have that perfect mixture of fun and threat.
Like most good literature today, Gnu is only available online.
No loafers allowed.
Savonarola could have learned a lot about book burning from the British Courts.  Michael Griffin told me he doesn’t have a single copy of his extraordinary book, Reaping the Whirlwind-The Taliban Movement in Afghanistan.  Instead, he has a certificate from a crematorium certifying that every known copy has been thoroughly burnt.Apparently, one sentence bothered a billionaire, so the auto-da-fe was ordered by a be-wigged freak in a robe, what the English call a “judge,” enforcing the Inquisitional libel laws of the benighted isle.Whatever, I was able to dig through the used book bin at the Strand bookstore in New York to get a copy.
Griffin published Taliban just a couple of months before the September 11, 2001 attacks. He expected the book to be ignored.  It was.
That is, by time it became a flash bestseller, it was way too late.
You still get a frisson of horrifying irony as Griffin warns that Osama bin Ladin’s threats against the USA, despite George W. Bush’s la-di-dah view, were no joke.
And there are plenty of sickening OMG moments here, as when Iran masses 200,000 troops on the Afghan border to overthrow the Taliban, “orthodox savages,” in the words of Iran’s president Khatami.  Iran hoped to halt the Taliban’s murder-spree against Shia villages””military action blocked by US threats.
Despite the book’s ending before the US-UK invasion, you lose nothing in reading this history of Afghanistan, because Central Asian history simply repeats itself, first as tragedy, then as farce, then as Obama.
As I don’t want Griffin to get in trouble (more trouble than he’s in already), I suggest that you pick up a copy only after your escape from Britain.
Finally, there’s Robert Parry’s new book, America’s Stolen Narrative:  From Washington and Madison to Nixon, Reagan and the Bushes to Obama. Don’t be put off by the dull title and crappy cover: this book is a tightly-written, tightly-aimed information drone strike.Example:  Parry’s take-down on General David Petraeus whom the US press creamed over (until the General had to resign for creaming over one distaff member of the press).  Gen. Petraeus came up with the sick and bloody idea of a “surge” – a massive increase in troops and killing–to subdue occupied Iraq.  “The Surge” supposedly quelled the Sunni insurgency.
Bullshit. The insurgency died down when the US quietly handed big bricks of cash to the insurgents and their brethren (“The Awakening Council”) – then turned a blind eye to the Sunni ethnic cleansing of Shia within Anbar province (while Shia were allowed to conduct pogroms elsewhere against Sunni).
[N.B. The danger-addicted photojournalist Ricardo Rowley filmed this US-sanctioned ethnic mayhem for Al Jazeera.
Parry was the Associated Press reporter who uncovered the Iran-Contra Arms-for-Hostages scandal.  For committing that and other courageous acts of journalism, he was canned by the AP. Parry has suffered the US media’s equivalent of banishment to Siberia. Banned from the airwaves and blocked out of his former newspapers and magazines, Parry must now, like Solzhenitsyn, publish his own books Samizdat style.  So forgive him the cheap-o cover design.
Extra credit:  If you’re in a stolen vehicle and moving too fast and erratically to read your Kindle, then avail yourself of an alternative cure for stupid: Sorry to Bother You, the latest uneasy listening music from hip-hop master Boots Riley, back with The Coup. If you find his “electromagnetic with a bomb esthetic” difficult to comprehend, here’s an excellent translation into Caucasian.

* * * * * * * *
Greg Palast is the author of the New York Times bestsellers Billionaires & Ballot Bandits: How to Steal an Election in 9 Easy Steps, The Best Democracy Money Can Buy, Armed Madhouse and the highly acclaimed Vultures’ Picnic, just named Book of the Year on BBC Newsnight Review.
Visit the Palast Investigative Fund’s store or simply make a contribution to keep our work alive!
Subscribe to Palast’s Newsletter and podcasts.
Follow Palast on Facebook and Twitter.
www.GregPalast.com