Why We Are Suing Ohio And Kansas
We CAN Reverse Purges

The Supreme Court decision blessing the purge of half a million voters in Ohio is NOT the last word.

On Monday, the renowned law firm of Mirer Mazzocchi Julien of New York will serve a 90-day notice on Jon Husted, the Secretary of State of Ohio, of our intent to file suit in federal court unless we receive complete information on each of the hundreds of thousands of voters removed from the voter rolls. 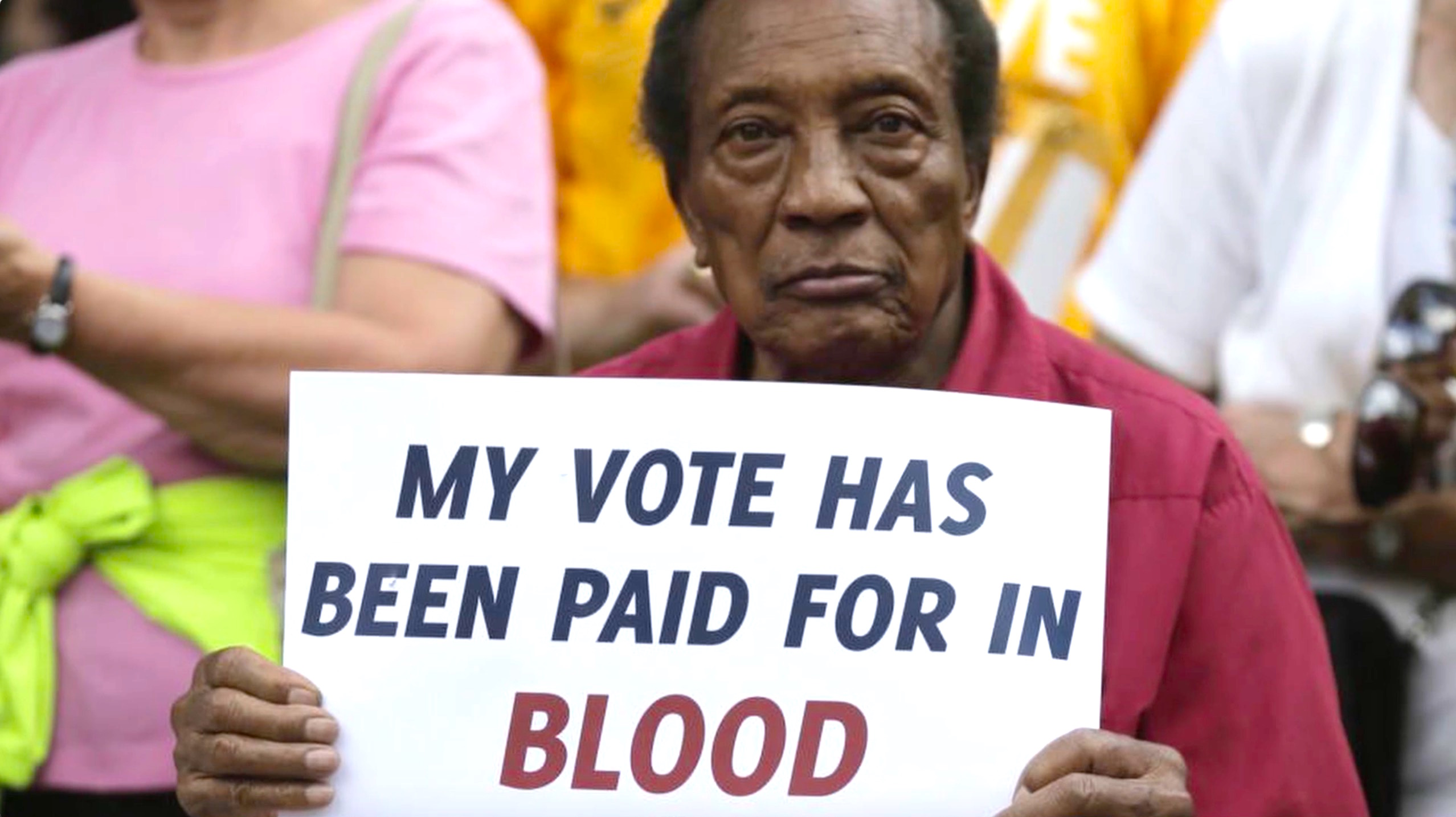 Movie Still from The Best Democracy Money Can Buy

We have already filed a demand for information on Kris Kobach, the eminence grise behind Ohio and other mass purges nationwide, to open his purge program files to us. We are joined in this demand by the ACLU of Kansas.
What we can do
As I explained in my prior report, the Supreme Court did not authorize Ohio to remove voters who skipped an election. Rather, failing to vote was merely one of Ohio’s excuses to send a postcard to these voters. Not returning the postcard was taken, absurdly insanely as evidence the voter had moved away.
I discovered this nasty trick for Rolling Stone a plain evil system I call Purge by Postcard.
The implications of the Supreme Court decision are unimaginably horrid, as at least two dozen states (not just Ohio) are using “evidence” that a voter has moved  “proven” by the failure to respond to a piece of junk mail.
The purge could be massive: A half-million in Ohio will undoubtedly lead to millions nationwide.
Normally, a Supreme Court verdict is the final word, the last rodeo.
But there is hope. Jeanne Mirer, our principal attorney, explained that the civil rights groups lost at the Supreme Court on a matter of law: In the absence of evidence to the contrary, Ohio may assume a lapsed voter has moved if they failed to return a postcard.
But what if the facts say otherwise?

Support our litigation, our Stop the Steal! 2018 Investigation & Action against Husted of Ohio and Kobach of Kansas for information to open their purge files. We really, truly need your help to build this massive action against Ohio and 25 other states using the same vote purging trick.

Just the Facts, Ma’am
It’s really simple to find out if failure to return a postcard is evidence you’ve moved: ask the voter. Call them up, knock on their door: Mr. Webster, have you moved to Virginia? 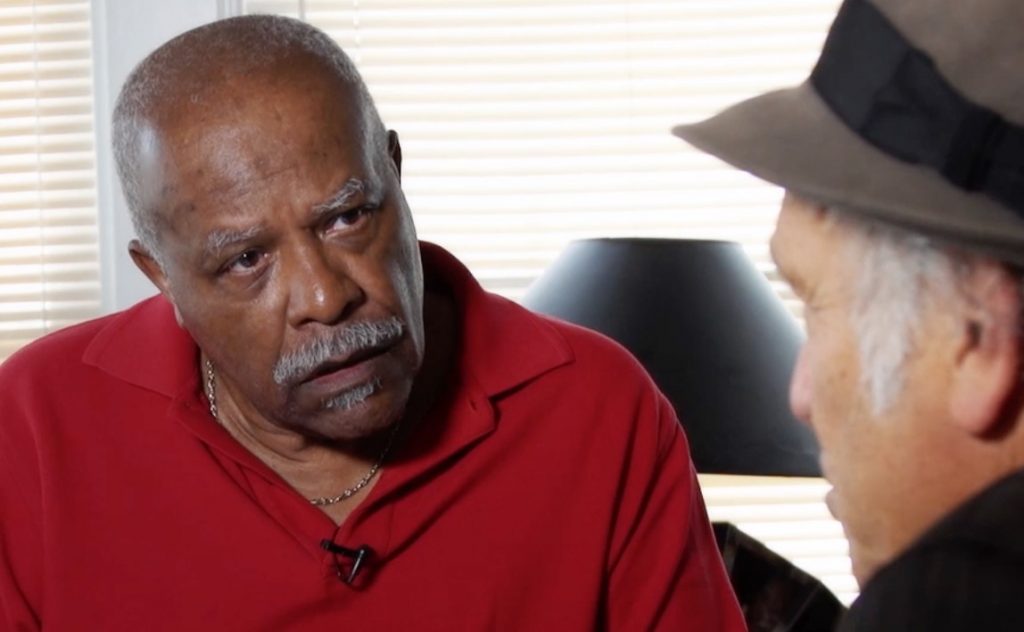 Greg Palast with Donald Webster, a voter targeted for purge

If Mr. Webster and others say, “No, here I am, I haven’t moved” well, then, the Court’s factual assumption goes poof! Because the National Voter Registration Act says that removal methods must be “reasonable.”
So, the way to challenge the Court’s decision is to prove that purge-by-postcard is unreasonable, an absurd way to determine if someone has relocated.
(Note: Ohio not only sent the purging postcard to voters who missed elections, over 400,000 were sent to those identified by Kobach as having moved to another state the infamous Interstate Crosscheck list.)
To get to these victim voters, we need their names. Kobach has so far stonewalled our polite requests for information to which we are entitled by law. So, our new demand comes with a 90-day notice of a lawsuit.
But, the doors to the truth are opening. Ohio’s Husted has now given us the name of every single voter purged in the last decade. But we need the details of who got postcards, who returned them, and why he sent these voters postcards in the first place. And we need copies of the junk mail that stole Ohio’s democracy.
I thank Mirer’s firm for taking on this enormous task because, in all, we are filing in 25 states where mass purges are conducted. (And she is not charging the Palast Investigative Fund one dime for her firm’s enormous and expensive effort.)
Our alliance with the ACLU of Kansas is especially vital as Kobach designed the Jim Crow postcards and created the list of 7.2 million voters he claims “moved” from their voting jurisdiction.
In Illinois, we are joined by the Rev. Jesse Jackson and in Georgia by Helen Butler of the Georgia Coalition of the Peoples Agenda where Hon. Stacy Abrams is running for Governor. Abrams is likely to face Brian Kemp who has purged Georgia voter rolls in a manner at least as spurious, vicious and racist as Ohio’s operation. We have just served papers on Mr. Kemp.
Through investigation, we have already obtained parts of these Ohio, Kansas and Georgia purge lists including the one targeting Donald Alexander Webster Sr., a 70-year-old Black voter in Dayton. He is listed as allegedly moving from Ohio to Virginia because there’s a Virginia voter registered as Donald Eugene Webster Jr.
But Webster has not moved from Ohio. I can testify to that: I met with him in his Dayton home. And he swears he’s never been a “Eugene” nor a “Junior.”
Webster insists, “I vote every election and every primary, every one.”
“I remember the Civil Rights Act, I remember all of those things. Almost all gone,” Webster added, with a deep sadness in his voice, “Somebody dropped the ball. Maybe it was us, our age group, that we thought we didn’t have to fight anymore.”
Well, Mr. Webster, the fight is beginning. Again.
* * * *
I need you to join this fight. We desperately need your help right now, to roll back the effect of this Supreme Court decision. I am not a lawyer, but I am an expert investigator and statistical analyst ”“ by work in a prior life and I need a team to take on this work nationwide to prove that the Purge-by-Postcard operation is wrong and racist. For reasons explained in my prior report, voters of color, young voters, low-income voters are the ones far most likely to be purged.
And, most importantly, I need to film it and report it. Publicizing the unfairness and cruelty of this purge operation is crucial. Five states have already dumped Crosscheck under the glare of our exposÃ©s.
You’ve seen our reports on Democracy Now, Guardian Online, Rollling Stone and cited in the New York Times and on the floor of Congress.
Our findings are made available to voting rights organizations without charge. (And we have impact: For example, Common Cause cited our investigative findings as key factual elements in their suit which ended the extension of Crosscheck in Iowa.)
I get great joy out of signing books and DVDs to those of you who generously keep the team alive and on the move across the nation. It is gratifying to know that there are so many of you who respect the dying art of old-fashioned investigative reporting. And for that, I thank you.