From Vultures’ Picnic: In Pursuit of Petroleum Pigs, Power Pirates and High-Finance Predators. A tale of oil, sex, shoes, radiation and investigative reporting – get it now.
[Based on a tip from some guy floating in the Caspian Sea in Central Asia, we take off for Baku, Azerbaijan, the “Islamic Republic of BP.” Stopping in London, the deathly ill MI6 double-agent Leslie the Bagman lays out the history of the coup d’etat, hooker-bait and the $30 million “sweetener” paid by Lord Browne to the oil nation’s president and suggests we find his old spy-mate, Natasha.
In the middle of this Byzantine maze, I’m looking for the real reason for the Deepwater Horizon explosion, not the bullshit seen on CNN. I get the goods, film it, get arrested for filming it, get film confiscated …except for the film in the little Austin Powers camera-in-a-pen that has to find its way out of the country.]

From Chapter 2: “Lady Baba-land.”
But we’re not leaving.

That’s when we find out the Security Ministry called our hotel and told them to seize our passports. Our passports with the visa stamps that allowed us in and, more importantly, allow us out.
Not good, not good.”¨ The Ministry police are on the way. “Routine,” they tell us. I bet it is. Who the hell turned us in? What wicked little creep said we were hunting for a BP blowout?
****
I’m killing nervous time looking up the price of Lady Baba’s shoes. And praying. Dear God: You made this mess, so get me the hell out of it.
And, what do you know, He answers! A voice in my head says, If you have already checked out of the hotel, Palast, that is, if the hotel tells the Ministry police when they arrive that, sorry, the foreigners have packed up and left hours ago, then the desk clerks are off the hook.
The clerks have figured this out too, so when we leg it down the stairs to request the bill to check out, there’s a charge of $400 added for the use of a sauna and the services of a “masseuse.” James wants to argue but I say, “PAY IT.”
That’s the most expensive massage ever that didn’t have a happy ending.
James unrolls two thousand in Euro notes, and now we have our passports and have checked out. We don’t, however, actually leave the hotel.
I sleep in fits, fully clothed, the passport and visa in the front pocket of my pants.
***
Made it to the airport. Baba International.
We’re outta here! Only three X-ray machines and checkpoints stand in our way. No problem.
Then there is a problem.
I took James’s suggestion to quickly move my “pen” from a pile of real pens to the middle of my checked luggage.
The cop at Checkpoint One signals me to come over. He shows me the X-ray monitor. Right in the middle, the thick metal camera-pen looks like a gun silencer against my briefs and socks. I pull it out and show that it writes my name. See!
He whispers to our fixer in Azeri: “I know exactly what that is. And it’s illegal.”
Here it comes. Hannukah with Baba, or at least his prison warden. The network won’t help, the U.S. Embassy will just tsk-tsk: Carrying contraband, Mr. Palast? So sorry. 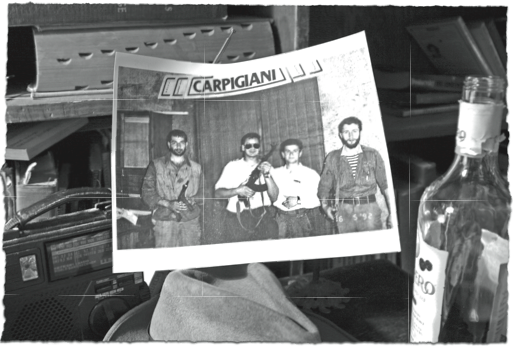 I hate me. Just for some cute film action, I get myself busted.
After this selfish walk down Me Street, I suddenly realized Holy No Goddamn I have the “destroyed” notebook pages on there, a hit parade of our sources. I hate me even more.
Then the young cop puts it back in my suitcase! And he whispers to my translator, “Get rid of this thing before Checkpoint Two because he’ll never make it through.”
Thank the Lord not every grandson of Baba loves his grandpa’s regime. They may carry his riot sticks, but they don’t all want to kiss them.
Thank you thank you thank you thank you.
Now, rather than add a new stupidity to my current stupidity, I do not sneak into a corner to remove the pen””furtive action will be noticed. I kick my baggage over to the second security line . . . then frantically open the case, throw my clothes all over the floor, saying, “Where is it? WHERE IS IT?!”
James knows the routine and tells our translator to open her purse and drop it on the floor. “Drop it?” K asks. James, says, “Right NOW!”
She does and my socks and underpants and medicine kit fly out, piled all over her bag. I pull out my asthma inhaler, say, “PRAISE GOD!” and take a big hit from the empty medicine injector.
I can breath easy now, and carefully replace all my stuff in my bag.
Well, not all. A dirty sock has fallen into K’s purse, which she’s picked up while helping me repack. A dirty sock with a pen inside.
****
Read all of Chapter One here …or just get the book, already.
Note, the video is one of 15 films from the film-enhanced eBook.
Get the eBook, the hardbound, Kindle or Nook additions at VulturesPicnic.org.
Greg Palast is the author of Vultures’ Picnic: In Pursuit of Petroleum Pigs, Power Pirates and High-Finance Carnivores.