For The Guardian
Now that I’ve dispensed with the obvious and obnoxious teaser headline, let’s drop the towel and expose Dominique Strauss-Kahn’s history of arrogant abuse. The truth is, the grandee of the IMF has molested Africans for years. 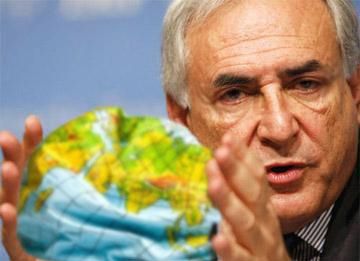 On Wednesday, the New York Times ran five – count’em, FIVE – stories on Strauss-Kahn, Director-General of the International Monetary Fund. According to the Paper of Record, the charges against “DSK,” as he’s known in France, are in “contradiction” to his “charm” and “accomplishments” at the IMF.
Au contraire, mes chers lecteurs.
Director-General DSK’s cruelty, arrogance and impunity toward African and other nations as generalissimo of the IMF is right in line with the story told by the poor, African hotel housekeeper in New York City.
Let’s consider how the housekeeper from Guinea ended up here in New York. In 2002, this single mother was granted asylum. What drove her here?
It began with the IMF rape of Guinea.

In 2002, the International Monetary Fund cut off capital inflows to this West African nation. Without the blessing of the International Monetary Fund, Guinea, which has up to half the world’s raw material for aluminum, plus oil, uranium, diamonds and gold, could not borrow a dime to develop these resources.
The IMF’s cut-off was, in effect, a foreclosure, and the nation choked and starved while sitting on its astonishing mineral wealth. As in the sub-prime mortgage foreclosures we see today, the IMF moved quickly to seize Guinea’s property.
But the IMF did not seize this nation’s riches for itself. Rather, it forced Guinea to sell off its resources to foreign corporations at prices much like the sale of furniture on the lawn of a foreclosed house.
The French, Americans, Canadians, Swiss (and lately, the Chinese) came in with spoons out and napkins tucked in under their chins, swallowing the nation’s bauxite, gold and more. In the meantime, the IMF ordered the end of trade barriers and thereby ruined local small holders.
As a result of the IMF attack, Guineans who could, fled for freedom and food. This week, then, marked the second time this poor African was molested by the IMF.
Now we have the context of how these two, the randy geezer of globalization and the refugee ended up, in quite different positions, in that New York hotel room.
Since taking over the IMF in 2007, erstwhile “Socialist” Strauss-Kahn has tightened the screws in an attempt to maintain the free-market finance mania that ruined this planet in the first place. [That’s worth a story in itself – and that’s coming. Our team has a stack of inside documents from the IMF that we will be releasing in my new book in the Fall.]
DSK’s lawyers say the relationship with the housekeeper was “consensual.” But DSK says that about all IMF agreements with nations over whom it holds life and death powers. That’s like saying a bank robbery is consensual so long as you don’t consider the gun.
Whether it was agreed-upon sex or brutal rape, it could only have been “consensual” in the same way that the people of Guinea consented to IMF-ordered financial rapine.
The Times article quotes an IMF crony of Strauss-Kahn saying DSK gets his way by “persuasion” not “bullying.” Tell that to the Greeks.
It was DSK who, last year, personally insisted on brutal terms for the so-called bail-out of Greece. “Strong conditionality” is the IMF term. Strauss-Kahn demanded not just a devastating cut in pensions and a deliberate increase in unemployment to 14%, but also the sell-off of 4,000 of 6,000 state-owned services. The DSK IMF plan allowed the financiers who set the financial fires of Greece to pick up the nation’s assets at a fire-sale price.
The Strauss-Kahn demands were not “tough love” for Greece: The love was reserved solely for the vulture bankers who received the IMF funds but were not required to accept one euro in lost profit in return. DSK, despite the advice of many, refused to ask the banks and speculators to reduce their usurious interest charges that were the root of Greece’s woes.
Requiring Greece to sell assets, drop trade barriers, and even end the rule that Greek ships use Greek sailors has nothing to do with saving Greece, but everything to do with DSK’s commitment to protect every banker’s balance sheet from unwanted violations.
I do not consider it a stretch to say that a predator in the bank boardroom suite assumes his impunity applies to the hotel suite.
*****
Forensic economist and journalist Greg Palast, author of the New York Times bestsellers, Armed Madhouse and The Best Democracy Money Can Buy, has investigated  the IMF and World Bank for BBC Television Newsnight and the Guardian Newspapers (London) and Democracy Now! (New York).
Subscribe to Palast’s Newsletter and podcasts.
Follow Palast on Facebook and Twitter.
GregPalast.com