For In These Times 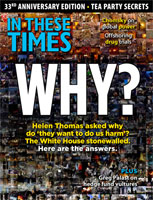 I get the idea that Eric Hermann doesn’t want to talk to me. When I came to his office suite, his hedge fund’s name plaque had been unbolted from the building’s wall, the suite number removed and all the employees locked in.
I’m not surprised. Hermann is a vulture, not the carrion-eating type, but the kind that prey on the financially wounded. “Vulture” is a hedge fund industry term for the financiers who buy up the right to collect old loans of the world’s poorest nations, and then use every trick in the book – from lawsuits to bribery to hiring Henry Kissinger’s lobby firm – to muscle destitute countries into turning over their meager foreign aid funds.
Vultures, whether of the feathered or speculator species, don’t like to talk to reporters.
On February 25, the day after BBC Television’s Newsnight ran my report from in front of Hermann’s locked office door, Britain’s Parliament voted to bar vulture funds from using Britain’s courts to grab the assets of poor nations.

And what about the United States? Why are our own politicians cowering behind legislative locked doors?
What we can do and why we should do it requires, first, a little more info on how vultures operate.
In Hermann’s case, his hedge fund bought, for next to nothing, the right to collect several million dollars owed by Liberia. (They grabbed the debt from a unit of what is now J.P. Morgan Chase; banks like Morgan Stanley like to hand off their dirty work.) In February 2002, Hermann’s fund then sued Liberia for the long-forgotten loan, for compounded interest and fees. Hermann filed suit the very week Liberia’s capital, Monrovia, was surrounded by warlords, with neither electricity nor water, and the government was controlled by an escaped convict from the United States, Charles Taylor, who is now imprisoned at The Hague.
To no one’s surprise, neither Taylor nor representatives of Liberia showed up in the New York court. Liberia thereby lost by default, and was ordered to pay Hermann and his partners all the millions they sought.
Fast forward to 2007 and peace in Liberia. Ellen Johnson Sirleaf is elected Africa’s first female president and donor nations, including the United States and Britain, agree to pay off Liberia’s old debts. By now, almost all that debt is held by vulture funds, but they all, including Hermann, agree to accept three cents on the dollar of their claims which, while seeming low, produced a very nice profit for these “investors.”
But when it came time to actually turn over the loan papers, Hermann and his partner, Michael Straus, admitted that they had passed off a hunk of their holdings to mysterious British Virgin Island funds called “Hamsah” and “Wall.”
With all the other creditors out of the way, Hamsah and Wall could, in effect, hold Liberia ransom for all its remaining and future assets. For example, Norway is helping Liberia drill oil – but that aid would now go to the two remaining vulture firms. They are demanding $28 million, more than 5 percent of the nation’s entire budget.
Hermann is not the only debt vulture, nor Liberia the only prey. In 2007, BBC aired my investigation of a vulture who goes by the moniker “Goldfinger.” Goldfinger is U.S.-based speculator Michael Francis Sheehan. Our evidence suggests Sheehan bribed the president of Zambia to win his pound of flesh. Hearing the report, a furious Congressman John Conyers (D-Mich.) drove immediately to the White House and confronted George Bush.
Bush promised Conyers he’d act, but he didn’t. One can only wonder if Bush’s failure to put vultures out of business may have been influenced by the fact that the biggest vulture of them all, Paul Singer, who threatens Congo and Argentina, has also become the biggest contributor to the Republican Party in New York. Singer, notably, funded the Swift Boat attacks on John Kerry.
But it’s not just Republicans who feed the vultures. Former Rep. Eric Massa (D-N.Y.) held a fundraiser sponsored by Singer and other vultures. Massa, in turn, sponsored a bill to punish nations that resist payment to vulture funds. Lucky for indebted nations, Massa’s own predatory behavior has rendered useless his service to the hedge fund chiefs.
Congresswoman Maxine Waters (D-Calif.) has sponsored the “Stop VULTURE Funds Act” (H.R. 2932), which mirrors what Britain and other nations have done: put the financial corpse-chewers out of business. Congress should pass it now.
***
Greg Palast is the author of the New York Times bestsellers The Best Democracy Money Can Buy (2003) and Armed Madhouse (2007), and co-author of Democracy and Regulations: How the Public Can Govern Essential Services (2003). Palast has won numerous awards for his investigative journalism. His stories have been published in many newspapers and magazines, as well as broadcast on the BBC and Democracy Now! His website is at www.GregPalast.com.
More information about Greg Palast.